Cryptos as an asset class could be India's middle path: Nandan Nilekani

Even as the clamour for bitcoin, the most popular crypto currency, rises, governments around the world are wary of its volatility. Figuring out its benefits will help build consensus on its regulation and adoption, says the Infosys co-founder 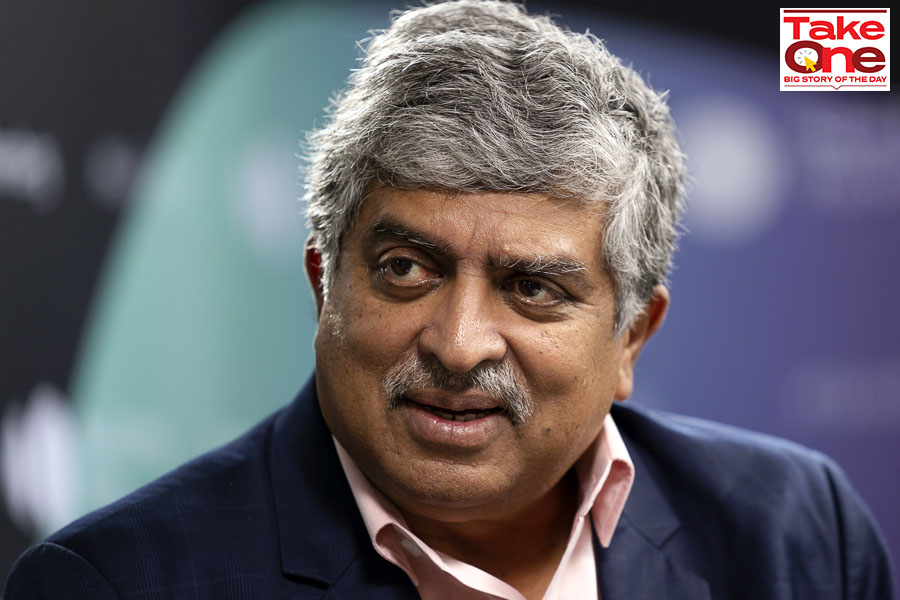 Bitcoin, the most popular crypto currency, has surged some 900 percent in the last year, trading this week at around $55,000 for one bitcoin, give or take a couple of thousand dollars. Its fans include Elon Musk, off-and-on the world’s richest person, rainmaker Cathie Wood of ARK Investment Management and a multitude of other celebrities.

In India too, it has a growing following with an estimated six million people having invested about a billion dollars in cryptocurrencies. And entrepreneurs of some 300 crypto-based startups in the country, and their backers, fear that India could ban private crypto currencies altogether.

A more pragmatic path could be struck, if India debates the benefits of crypto currencies and allows it as a well-regulated asset class, rather than as a transaction mechanism, Nandan Nilekani, co-founder of IT services giant Infosys and former chairman of India’s unique ID authority, said in an online discussion on March 22. The discussion, titled ‘Foundation to Transformation: The Next Decade of Indian Tech’ was organised by venture capital firm Blume Ventures.

“I think there's no question that Indians have already started using the underlying technology of Bitcoin, which is, blockchain,” Nilekani pointed out. Further, it is also now widely accepted that India will come out with a digital rupee of its own, controlled by the central bank, Reserve Bank of India, in the next two or three years. “If you have a digital Indian rupee on UPI rails, you don't really need other ‘stablecoins,’” he said. UPI is India’s government-backed unified payments interface.

Governments around the world are wary of allowing private ‘stablecoins’, which are cryptocurrencies with values tied to fiat currencies or other assets, for fear that they could undermine nations. The debate over such currencies also gained momentum after social networking giant Facebook proposed its own global digital currency and financial infrastructure called Libra, in 2019.

Blockchain and bitcoin allow internationalisation of financial systems because they can plug into the global financial market for bitcoin. “But the challenge we have is that the government rightly worries about what is the implication,” Nilekani said. For example, today, with the conventional fiat currencies, Indian rules allow citizens to send up to $250,000 overseas per year. Bitcoin is akin to “unlimited export and import of currency, so it completely undercuts whatever currency controls they have”.

Central bankers from Norway—the world’s most cashless nation—to the US and India, are opposed to private digital currencies for the volatility associated with them. On the other hand, Nilekani’s comments imply that governments could allow people to make informed decisions to own cryptos as investment assets.

“I don't think we can offer cryptocurrency as a transaction medium. It won’t compare on performance with UPI for many years, but it can be thought of as an asset class,” Nilekani said. UPI—already a hugely popular low-cost payments system—will get even better. National Payments Corporation of India, which operates UPI, is aiming for the platform to facilitate a billion transactions a day.

“With that kind of very high volume, low-cost infrastructure, it will be difficult at least for now to provide competition from Bitcoin in the transactional sense,” he said. “But certainly as an asset class, it could be looked at.”

There are parallels here with how India had extremely tight restrictions on gold, with the Gold Control Act by then finance minister Morarji Desai in 1968, which was abolished in the liberalisation of the 1990s, he said. Today, Indians can buy digital gold using their smartphones.

As Indians become more comfortable with the cryptos as an asset class, the government can make the rules on how people can invest in them, what they need to declare and so on, and this will have to be done in a structured manner. Building consensus on this will involve debating and demonstrating how digital currencies might benefit Indians, Indian companies and India as a country, he said.

“Unless you're able to argue that, no amount of technology is going to sway anybody's point of view.”

In early March 2020, the Supreme Court set aside a circular by RBI on virtual currencies, providing a breather for startups working in this field. The RBI circular, dated April 6, 2018, had directed that entities under its purview should not deal with virtual currencies. The Supreme Court ruling was in a lawsuit between the Internet and Mobile Association of India and the RBI. Cryptocurrency and digital money startups and companies celebrated the ruling.

An Inter-Ministerial Committee constituted on November 2, 2017, recommended a specific legal framework including the introduction of a new law, called Crypto-token and Crypto-Asset (Banning, Control and Regulation) Bill, 2018. The committee was initially of the opinion that a ban might be extreme, and the same objectives could be achieved through regulatory measures, Sajai Singh, partner at the law firm J. Sagar Associates, had said in an email at the time of the Supreme Court decision.

However, the committee changed its mind and, in its final report, it recommended a complete ban on private cryptocurrencies through a proposed legislation—Banning of Cryptocurrency and Regulation of Official Digital Currency Act, 2019. This Bill recommended the creation of a digital rupee as legal tender by the central government, in consultation with the RBI, and recognising of official foreign digital currencies in India.

More recent comments from Finance Minister Nirmala Sitharaman have brought cheer to those who believe in cryptocurrencies. “From our side, we are very clear that we are not shutting all options. We will allow certain windows for people to do experiments on blockchain, bitcoins or cryptocurrency,” Sitharaman said at a conference organised by media company India Today, earlier this month. “We are not going to shut it off,” she said.

Crypto startups in India say that Blockchain—the record-keeping technology and digital ledger behind the bitcoin network—enables cross-border transactions with ease, beneficial for small and medium businesses (SMBs) and freelancer communities in India. Easing of regulations will only help them, reducing roadblocks and give birth to many startups in India, they say.

They have also started a campaign #Indiawantsbitcoin and a website indiawantsbitcoin.org where people can find ready-to-use drafts on the benefits of bitcoin that they can send their respective members of parliament, petitioning them to get the government to reconsider the proposed ban.

Another reason why India shouldn’t go the way of a blanket ban on private digital currencies is that the global crypto currency store could be a much-needed source of legitimate capital for the country’s businesses and, in particular, the millions of MSMEs (micro, small and medium sized enterprises). The estimated credit gap that India’s MSMEs face is about $219 billion.

“If MSMEs need capital, and if we can say that the capital in the crypto world, which is half a trillion dollars to a trillion dollars, if that is made accessible to MSMEs, and if they can grow, then we have an argument for that,” Nilekani said.

India is probably the only major economy with a young population in an ageing world, and if it is to deliver compounded 5-6 percent GDP growth for the next 15 years, it is going to need enormous amounts of capital. And therefore, apart from the regular capital it is already accessing, if it also accesses the bitcoin store of capital, “then that is only better news for the country,” Nilekani said.

The debate should be framed to bring out how cryptocurrencies will help India's progress, he said. “How will it help a billion Indians to do better; how will it allow 10 million India SMEs get access to capital? If you can frame it like that, I think we can also create a compelling argument.”
​