How Fire-Boltt is playing it smart with smartwatches

Fire-Boltt has set the smartwatch market on fire with its hyper-affordable, feature-loaded products. But how sustainable is the 'import-from-China playbook'? 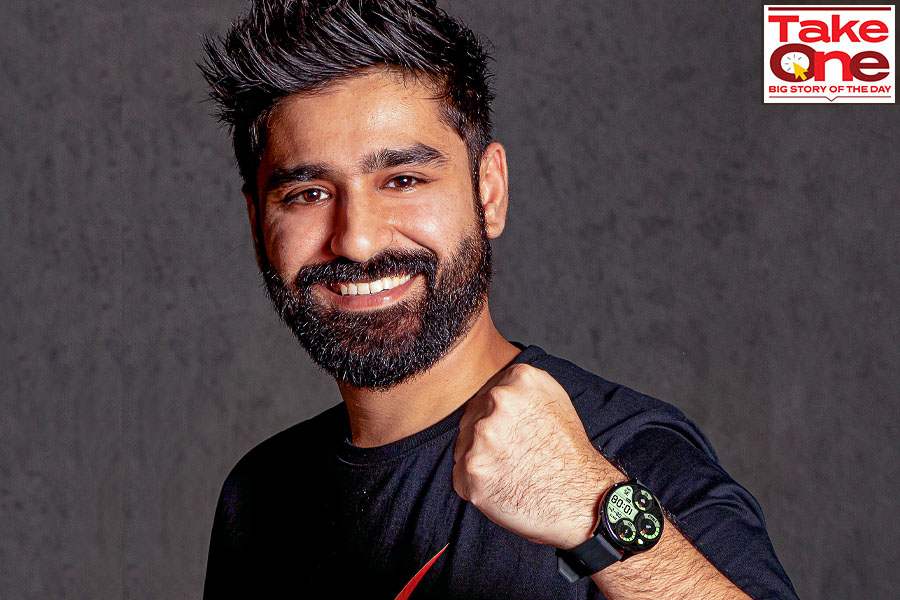 In 2015, Arnav Kishore thought himself to be a smart Alec. He rolled out Fire-Boltt with his sister Aayushi, prepared an exhaustive blueprint to make the business tick, and made a brilliant move by tying up with top Chinese manufacturers to sell smart bands at a mouth-watering rate of Rs1,999. There was an established and successful playbook created by the likes of Micromax and other desi hustlers—‘import from China, and then brand and sell in India—which Kishore was trying to ape. So the strategy was presumed to be a sure shot blockbuster.

The young entrepreneur also had another huge edge. Fire-Boltt was incubated and backed by Savex Technologies, India's third-largest IT and telecom products distributor based out of Mumbai. What this meant was that Kishore could easily piggy ride on Savex’s massive retail network. In short, it meant instant success. He looked like the ‘right man, at the right time, and with a right product’.

The band, though, didn’t have much elasticity over the next five years. The reason was simple. India was in the midst of a heady smartphone revolution, Chinese brands like Xiaomi were breathing fire and there were not many takers for smart wrist bands from Fire-Boltt. As the market dynamics remained heavily loaded in favour of phones and bands from the Chinese biggies, the ‘Gully Boy’ didn’t stand a chance. 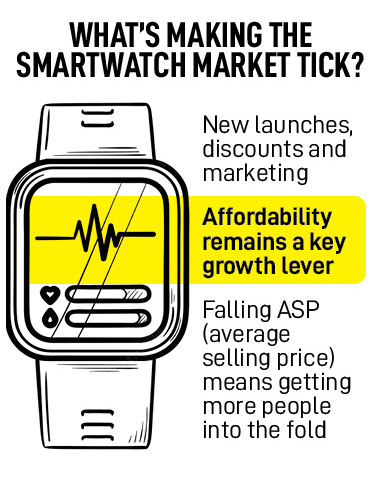 Kishore, though, didn’t give up. “I knew our time will come,” says the founder and chief executive officer of Fire-Boltt. Though the business stayed muted for years and Kishore didn’t have any reason to stay optimistic, the chartbuster from Gully Boy in 2019—‘Apna time aayega’ in 2019—kept the fire in his belly alive. Interestingly, a year later, India was in the midst of a pandemic-induced lockdown and Kishore thought it was the right time to take a leap of faith. He launched smartwatches in October 2020—the starting range was Rs2,999—and ended the year with a minuscule market share of 0.3 percent. Kishore continued to keep a close watch on market trends.

In 2021, he fine-tuned his strategy. He rolled out the Ninja series of smartwatches at a tempting tag of Rs1,699, roped in a battery of celebs—Bollywood actor Vicky Kaushal in June, cricketer Virat Kohli in October, and his teammate Shubhman Gill followed suit—to endorse the brand. He loaded his smartwatches with industry-first features such as Bluetooth calling, heart rate monitor, and better and bigger screen display. The move also coincided with the trend of bands losing popularity. From 0.37 million bands shipped in the second quarter of 2021, the numbers dipped to 0.13 million during the same quarter this year. Meanwhile, Fire-Boltt saw a massive jump in its fortunes as market share leapfrogged from 0.3 percent in 2020 to a staggering 11.6 percent in 2021. 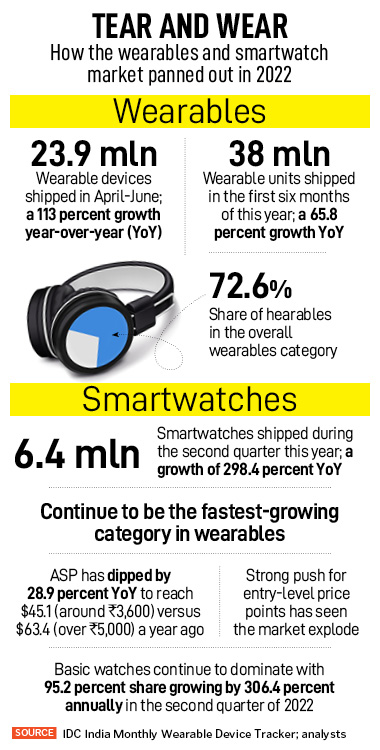 The good times continued to roll in 2022 as well. In the second quarter this year (April-June), Fire-Boltt pipped Noise to emerge as the biggest smartwatch brand in India with a market share of 28 percent, according to the latest data by Counterpoint Research. Increasing offline presence, a flurry of launches, and rolling out features at affordable prices helped the brand to take the lead, underlined the research agency in its assessment of the brand’s performance.

IDC India, though, puts Fire-Boltt second in the pecking order with a 24.8 percent market share. The research agency, though, dishes out similar reasons explaining the brand’s blockbuster performance. Fire-Boltt, it underlined in its latest quarterly report, made an aggressive push in the watch category with several new models, undertook strong promotions across the online and offline channels, and gained popularity in the wearables category. “It has found an appeal with price-conscious consumers who are looking for a device complementing their smartphone,” contends Navkendar Singh, associate vice president (devices research), IDC India, South Asia & ANZ. Fire-Boltt, he underlines, is one of the largest brands in the offline space, a fact which explains why it has picked up feverishly across smaller cities and towns.

Kishore, for his part, maintains that a clutch of factors helped it ace the game. First was loading smartwatches with features which pushed smart bands out of the game. Second was playing price warrior. “Non-metro cities constitute over 70 percent of Fire-Boltt’s sales,” he says, claiming that the brand sold 2.5 million units in FY22. “The plan now is to triple our revenue to Rs1,500 crore by the end of this year,” he shares an ambitious target. And lastly, the strategy to bombard consumers with multiple SKUs seems to have paid off. “We have launched over 30 smartwatches during the last six months,” he says, adding that the Ninja series accounts for more than 55 percent of total sales.

Though Fire-Boltt has spread like wildfire, its business model might result in a rude jolt for the company. The reason is simple. So far, the brand has been importing from China and selling in India. “The ‘import-and sell’ playbook is not a sustainable marketing and branding strategy,” points out Ashita Aggarwal, marketing professor at SP Jain Institute of Management and Research. She sounds a word of caution. If the only differentiator lies in importing watches, loading it with features and selling it, then the model can be replicated by anybody. Even Snapdeal had actor Aamir Khan as brand ambassador, but did it help a bit in building consumer stickiness? she asks. “Can Noise and boAt not play the same game? In fact, they are much better equipped to do so,” she underlines.

Industry analysts point another threat. Though Fire-Boltt takes pride in having an extensive range of watches suited for all pockets, it is spreading itself too thin. “It has to also ensure that quality doesn’t go for a toss,” says an analyst requesting anonymity. “There is a parallel,” he says. The first wave of electric two-wheelers in India was dominated by cheap imports from China which cared little about quality. “We know what happened after that,” he says. 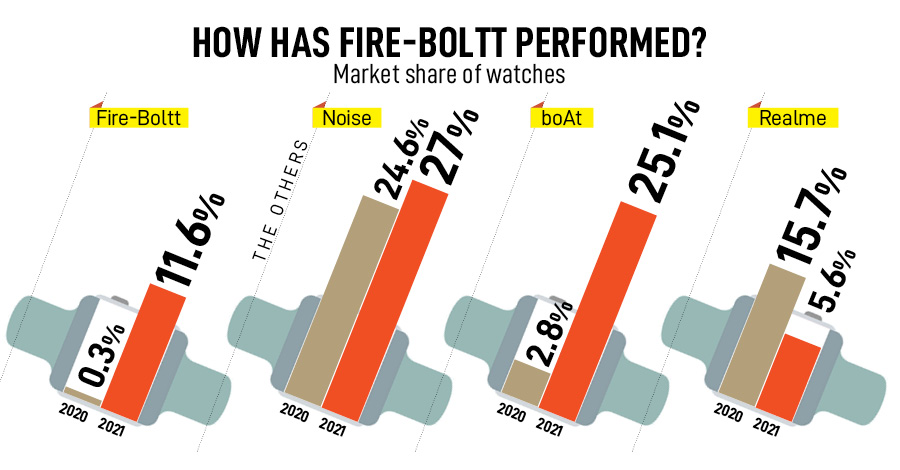 Kishore, for his part, is aware of the challenges. The brand, he points out, is working aggressively on cutting its uber dependence on imports from China and is at an advanced stage to roll out local manufacturing. “Our design and R&D make us unique,” he says, adding that the brand will continue to maintain its dominance. The brand, he lets on, is expanding its product portfolio, entering into new segments of IoT (Internet of Things) devices and truly wireless earphones, and looking to expand operations to the US, Europe and Africa. “We have just started our fireworks,” smiles Kishore.

What the young entrepreneur now needs to do is to play smart and watch out for likely jolts. After all, the disruptor also might get disrupted if the rules of the game change.