He becomes the first Indian to hold the position in the company's 126-year history. Now, he'll need to replicate successful strategies across global markets as growth is likely to pick-up in mid-2021 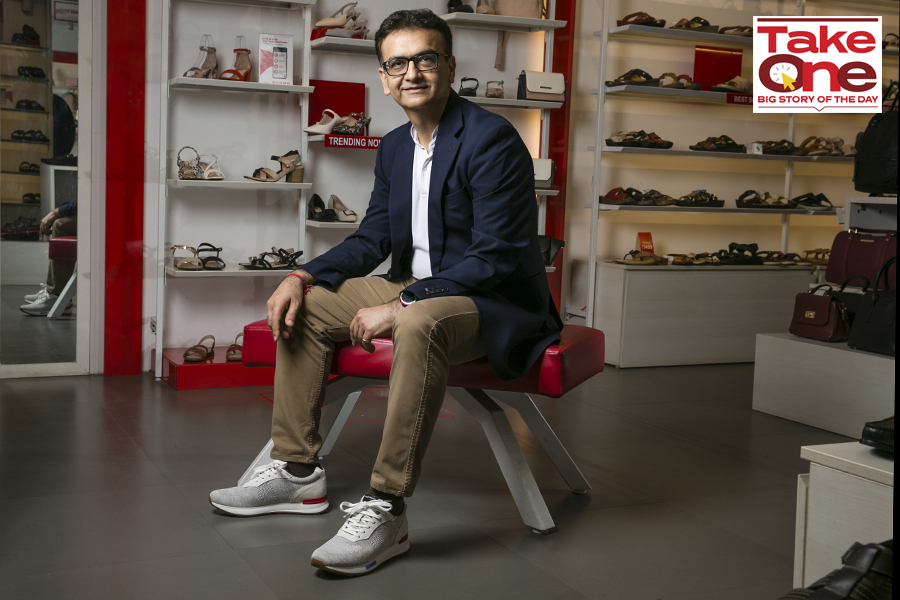 The discretionary nature of going to buy footwear from a store has meant that retailers across the globe have been hurt hard due to the pandemic-induced lockdowns. Bata India is no exception, having seen a tough nine months, with revenues slowing down for the last three quarters in calendar year 2020, compared to the year-ago levels. It has also reported net losses for the last two successive quarters, hurt by lower sales growth.

It wouldn’t have been wrong to assume that the performance of its India chief executive Sandeep Kataria could have come under scrutiny. On the contrary, on November 30, the Swiss-headquartered, family-owned multinational announced that it has made Kataria, 50, its global CEO—the first Indian to hold the position in the corporate’s 126-year history.

“It is always a pleasant surprise when you are recognised by the company you work for,” Kataria tells Forbes India during a Zoom call from Bata India’s headquarters in Gurugram. “[When told about the global CEO appointment] I just felt privileged to be a part of Bata’s success. We have grown up wearing Bata shoes at our first jobs or at sports grounds,” he says in one of his first interviews since succeeding Alexis Nasard as global CEO.

A closer look at the India business shows that Kataria had been ticking all the right boxes since taking charge in August 2017, and making strategically right decisions during the pandemic to boost revenues, sales and enhance customer experience.

India is Bata’s largest market by volume, where it has around 1,500 stores and contributes about one-fifth of total revenues, followed by Italy. Chile and Columbia are Bata’s other major markets. Founded in 1894, Bata Shoe Organisation has a presence in 70 countries through 5,300 stores across Africa, North and South America, Europe, Southeast Asia and the Indian subcontinent. 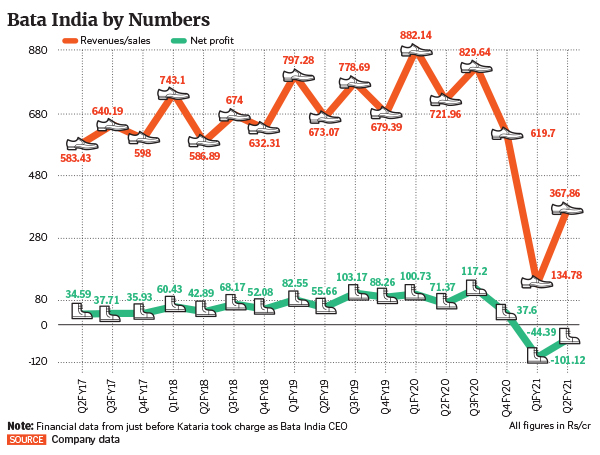 What got Kataria the global role?
Kataria and the team in India have been able to gradually boost revenues and bottomline for Bata India (see chart) through the introduction of new and higher-value products and better brand positioning. Bata is India’s largest footwear retailer by value of sales, ahead of rivals such as Paragon, Relaxo, Liberty Shoes and Puma.

Bata has focussed on millennials as its target audience to boost growth. This led to the introduction of the 9-to-9, Power Fitness and Athleisure collections in recent years; their campaigns were introduced by actor Kriti Sanon, the late actor Sushant Singh Rajput and India cricketer Smriti Mandhana, as Bata’s brand ambassadors.

During the pandemic, the consumer trend for footwear has changed with demand higher for open and washable footwear such as sandals and slippers rather than closed corporate leather shoes. Demand for loafer shoes, casual shoes, active and sportswear shoes is also up, especially after the festive season. With people still working from home and preferring to limit outdoor activity, Bata will continue to see more traction for casual and active wear footwear, at least till offices and schools reopen.

“In the past few years, the Bata India team has delivered growth in footwear volumes, revenues and profits, and has strengthened customer measures in a highly competitive market,” says Bata India chairman and independent director Ashwani Windlass.

Explaining how Kataria clinched the global CEO post, Windlass says: “India is not only a diverse market but in the past few years it has also witnessed several complex situations such as the Goods & Services Tax, sweeping digital innovations, the global economic slowdown and now the pandemic. To navigate this space with innovative marketing ideas and then translate them to the P&L is what matters.”
During the pandemic, Kataria introduced Bata Chatshop, whereby customers can text message, call or video chat with a nearest store representative about the footwear they seek, purchase it online and get it delivered home in a few hours.

Another initiative that it introduced is the Bata Store on Wheels, where temporary stores have been set up in residential complexes and condominiums to provide a safe and convenient shopping experience to customers. In case a relevant size, colour or design is not available, these can be sourced from a nearby Bata store. Bata has set up the Store on Wheels in more than 35 Indian cities and attracts about 100 new activations each week, including in Delhi, Mumbai, Kolkata, and Chandigarh.

In 2019, the company relaunched its flagship loyalty programme Bata Club, which has 15 million active members. Some key features included use of advanced analytics to drive relevant and personalised campaigns and introducing technology driven in-store tools like customer single view at point of sale (POS).

Kataria and his Indian team executed each of these plans successfully. “The best part is that we can translate all these [initiatives] into a global practice,” Windlass says.

About 15 to 18 percent of Bata India’s sales come through digital and these new-age marketing initiatives. Bata reported sales of 49.3 million pairs in FY20 of value Rs3,122.2 crore in the same period. Relaxo, another listed footwear rival, sold more than three times more pairs (179 million) in the same period but on lower priced products, clocking revenues of Rs2,410 crore in FY20. Bata India has a market capitalisation of Rs20,144.12 crore while Relaxo’s market cap is at Rs17,928.82 crore, as of December 9.

Kataria’s stint as chief commercial officer at Vodafone India in 2015 has proved to be beneficial. “The location-based targeted messaging, identifying customers in store vicinity, offering reward points and other promotion campaigns have been deepened with my telecom experience,” he says.

Growth resumption mid- 2021
India, like other Asian economies of China and South Korea, has started to see a rebound in business activity in the past three months. High frequency indicators are positive for the September-ended quarter, but pain points such as job losses or salary cuts, rising bounce-rates in debit transactions from customers and sluggish fresh borrowing from banks indicate that the economy is not completely back on track.

Even as economies move towards the year-end holidays, Kataria is not losing time. “We will see more casualisation as a trend, even in our dress shoes and fashion footwear,” he says. Bata will also place a stronger focus on innovations and sale of its broad range of sneakers—the ‘Power’ brand and the eponymous ‘Bata’ brand—in India, explains Kataria.

Two other existing labels, Bata Comfit and the 9-to9 collection, aimed for the young, working women, are also lined up for more innovations and designs in the new year, he adds, without disclosing specific plans.

There could, however, be some more pain for its premium leather segment. “This is still a difficult situation. We have to see how things move in the coming months,” says Kataria, particularly as mobility of people has reduced. Overall sales are back to about 75 to 80 percent of pre-Covid-19 levels and consumer spending, too, is a little higher. “Currently we are seeing a strong uplift in demand for dress shoes, particularly the Red Label collection,” says Kataria.

As business activity opens up and mobility improves, demand for footwear is “broadening out” from just open footwear in smaller towns. “December will definitely look better than the September-ended quarter,” he says. Windlass says growth is expected to resume towards the end of Q1FY22 (June 2021) “as consumer spending picks up”.

Currently, Bata India has more inventories in the school shoes segment, but Kataria says they would be better placed when schools reopen. He declines to talk about the strategies for Bata’s other international markets, saying it is “too early”. Bata will announce the head of its India operations soon, he adds.

Bata India will place a strong emphasis on growth through the franchise model in 2021. “There are more queries coming in to open franchisee outlets in smaller towns. Bata has about 1,200 of its own branded stores, 100 Hush Puppies brand stores and another 200 franchise outlets across India. The focus will be more on franchise business,” Windlass says, as 50 more franchise stores are scheduled to open by December-end 2020.

Bata closed around 48 to 50 store outlets in India in 2019, as part of “routine” network optimisation, Windlass adds.

The company has been stringent in following pandemic norms in its daily business. It had a second set of staff as back-up at factories and some of its main stores, so that they could take charge of the shift or operations in case of infections or quarantine requirements for others. Footwear, if tried by a customer, is also sanitised and kept quarantined for 72 hours before being tried on others.

Footfalls to stores and shopping malls are expected to improve in the early part of 2021. But as demand for various brands picks up, revamping the current product portfolio and offering discounts will put pressure on margin growth next year.

Kataria’s biggest challenge will be to revive growth in some of its key markets—currently facing the second wave of the pandemic, which has resulted in intermittent lockdowns. Kataria has joined a select band of Indians or those of Indian-origin to lead global organisations, including Microsoft’s Satya Nadella, Alphabet’s Sundar Pichai and DBS’s Piyush Gupta. But, like them, he will need to replicate successful strategies across global markets. Luckily, he has time on his hands to execute his plans.