How ClearTax is transforming to a full-stack fintech player

Though ClearTax started as an online income tax filing platform for individuals, it diversified to cater to professionals and enterprises. The growth has been astonishing—and ClearTax is ready for its next step now 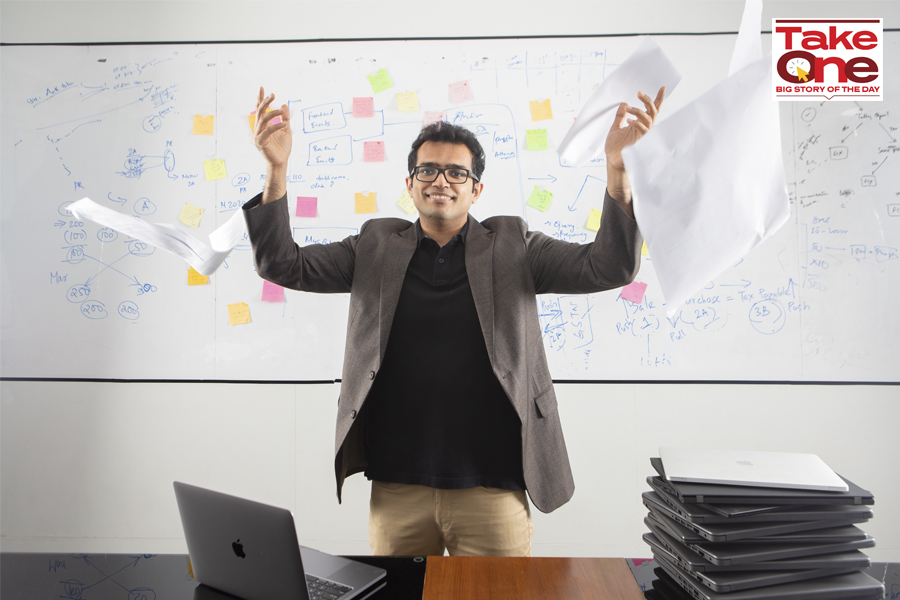 “The right path is having large revenue from tax, lending and financial services, and IPO at the right time.” - Archit Gupta, founder and CEO, ClearTax

It was not a calculated move. And Archit Gupta knew it. But in 2011, what mattered most for the software engineer—a 27-year-old startup employee in the Bay Area in San Francisco—was to back his counter-intuitive instinct. The early-stage firm Gupta worked for was acquired, and the IIT-Guwahati alumnus didn’t want another job; the idea of starting on his own began to brew in his mind. The logical move would have been to set something up in the Bay Area itself, the Mecca of startups. The less predictable move was to go back to India and take fresh guard. A quick chat with his father, a chartered accountant, made Gupta see the elephant in the room: Vexing tax problems for consumers and enterprises. “I knew there was a problem, which meant an opportunity,” he says. The volley of problems was as diverse as the country to which he was planning to go back to. First, in India, taxpayers accounted for a meagre one percent of the population; this meant a limited market to cater to. Second, most of those filing taxes were doing it with the help of a chartered accountant. This meant there was no technology used in the process, either by the government or by consumers. Fintech, in fact, was an alien word. Third, instilling trust among taxpayers to use an online platform for paying taxes was well-nigh impossible. Fourth, feedback from both colleagues in the Bay Area as well as friends back in India was unanimously dissuading. Undeterred, Gupta backed his instinct. “If I am wrong, so be it. What’s the big deal?” he thought. “I take deep comfort in being wrong and misunderstood,” he smiles. Gupta, along with his father Raja Ram Gupta, and friends—Srivatsan Chari and Ankit Solanki—started ClearTax in 2011. The venture stayed bootstrapped for over three years. “The first few years were crazy, we had very little revenue,” says the founder and CEO. Cut to 2020, ClearTax posted revenue of Rs 60 crore in FY20, a 163 percent surge over the previous year’s Rs 22.8 crore. The pace of growth gets amplified when contrasted against just Rs 80 lakh in fiscal 2017. The increase in the number of individual users over this period—from 8 lakh to 40 lakh—is equally staggering. “Today, ClearTax has a 10 percent market share in income tax (IT) filing,” claims Gupta. This, he adds, makes the platform the biggest among organised players in India.

Though ClearTax started as an online income tax filing platform for individuals, it diversified to cater to professionals and enterprises. The growth has been astonishing (see box). “We process over $200 billion of GST (Goods & Service Tax) in India. This makes us the biggest platform,” claims Gupta, adding that the company started offering GST services in 2017. What started as a B2C company in 2011 now gets 85 to 90 percent of its revenues from enterprises, making ClearTax a predominant B2B company. Ask Gupta about the bottom line, and he doesn’t get hassled. “In B2B, we don’t lose money,” he says. The consumer side of the business, he informs, is at a breakeven level. “We aspire to become a profitable company. For us, the right path is IPO at the right time.” Buoyed by the success, Gupta and his team have seen in diversifications, ClearTax has started pilots to lend to small and medium enterprises. The move, again, is counter-intuitive. The lending market is highly cluttered. In a segment where everyone—from banks to startups to NBFCs—is lending, especially to SMEs, does it make sense for ClearTax to throw its hat in the ring? Gupta gives himself a strong chance on the basis of three advantages: Data, relationships and trust. “In this space, there is no first-mover advantage,” he says. ClearTax, he adds, is well-placed to manage the financial lifecycle of a consumer, be it an individual or an enterprise. Investors back Gupta, and the diversification gambit. ClearTax has been on a journey to broaden its offerings from IT filings to wider fintech software as a service offerings, reckons Mridul Arora, managing director at SAIF Partners. “The company now is at a great vantage point and scale to be a full-stack fintech player,” says Arora. One, it’s one of the most trusted fintech brands with a decade-long presence. “This trust will stand the company in good stead as it broadens its financial offerings,” he says. Two, the startup boasts of a strong base of SMEs, accountants and enterprise customers. “Enhancing offerings for them is a natural progression,” adds Arora, adding that an extreme customer obsession, a product-led founding team, and the ability to quickly iterate have worked well for ClearTax. “We’re excited about the next phase of growth for the company,” says Arora. The early phase, though, was a roller-coaster. From the beginning, ClearTax was missing external validation. Venture capitalists (VCs) then had an appetite to back ecommerce ventures only. There was no risk capital for models which didn’t have any precedent in India; even angels shied away from putting money in something as alien as online income tax filing. ClearTax, says Gupta, stayed bootstrapped for three-and-a-half years. That meant shoestring budgets and minimal expenses. “We just had enough to pay full-time engineers,” recalls Gupta. In fact, Chari and Solanki didn’t have enough money to buy first-class train tickets to travel from Bengaluru to their hometown Mumbai. For inter-city meetings as well, the mode of travel was either bus or train. And second-hand laptops were the norm. “There were times when I thought of giving up,” he admits.

Two years into operations, ClearTax faced its first big fight. It was much like David versus Goliath. A billion-dollar American tax filing company—H&R Block—made its India debut. “Their offerings were similar to ours,” says Gupta. The product communication, the language, “and even spelling mistakes” were the same. “It was ridiculous,” he says. The only difference was their marketing muscle, “which was over ten times ours”. The fear of losing the market, laboriously built over two years, was genuine. What the funders badly needed was not capital to fight capital, but strategy to take on a bigger rival. Enter Y Combinator, the storied Silicon Valley incubator, which picked ClearTax as its first investment in a company solely focussed on the Indian market. “Nobody was backing us in India. Everyone thought it was illogical,” says Gupta. Y Combinator, interestingly, bills ClearTax as the “Intuit of India”, alluding to the American accounting, tax filing, and financial planning software giant. The next turning point for ClearTax came in 2016, when the company decided to look beyond income tax filings. The startup was already sorted on the individual taxpayer front, with several lakh users. But that precisely was the problem. IT users will grow every year but will it boost revenue was the question staring at the co-founders. The answer was simple: Diversify into B2B, and start catering to enterprises. The solution was not that simple, though. In 2017, when Gupta was pitching GST solutions to large companies, all of them took a dig at the company’s offering. Clearly, ClearTax was no Deloitte, EY or one of the Big Four. The rejection, and the ridicule, were painful. Gupta had also taken a big bet on the GST business, ramping up a 30-member team in mid-2016 to over 300 people in eight months. Most of the money raised by the company was invested in GST. “If the best had not worked out, we would have died,” he says. The gambit paid off. The company now earns over 85 percent of its revenue from enterprises. VCs are not surprised by the growth story of ClearTax. “It’s a story built on the digitisation of the country,” says Anil Joshi, founder of Unicorn India Ventures. It’s also a story of making an early move. “When nobody backed them, they backed themselves,” he says. ClearTax, Joshi explains, started its journey when Indians were just warming up to the idea of digital shopping and payments. Conviction in the product and staying put by battling odds enabled them to gain the trust of the consumers. “In fintech, what is most crucial is trust. This can’t be gained overnight or by burning cash,” he says. The challenge for them now is to strike a delicate balance between the core and new business. Lending, he underlines, is not easy, and everybody isn’t cut out for it. Gupta, for his part, is willing to back his contrarian mindset again. ClearTax, he says, is going slow with the lending pilot. The idea is to make steady progress, not a rushed one. Is the company equipped to handle the challenges that lending brings with it? Gupta nods. “While headwinds keep coming, tailwinds too keep picking up.”

Tweets by @forbes_india
Brian Suder, a businessman who went from rags to riches
Superba revolutionising branding with augmented reality