Budget 2021-22 clubs various key schemes without providing specific allocations, the funding is cornered by a few ministries, and the government has not been able to leverage the potential of a gender-responsive budget as a tool for inclusive economic growth 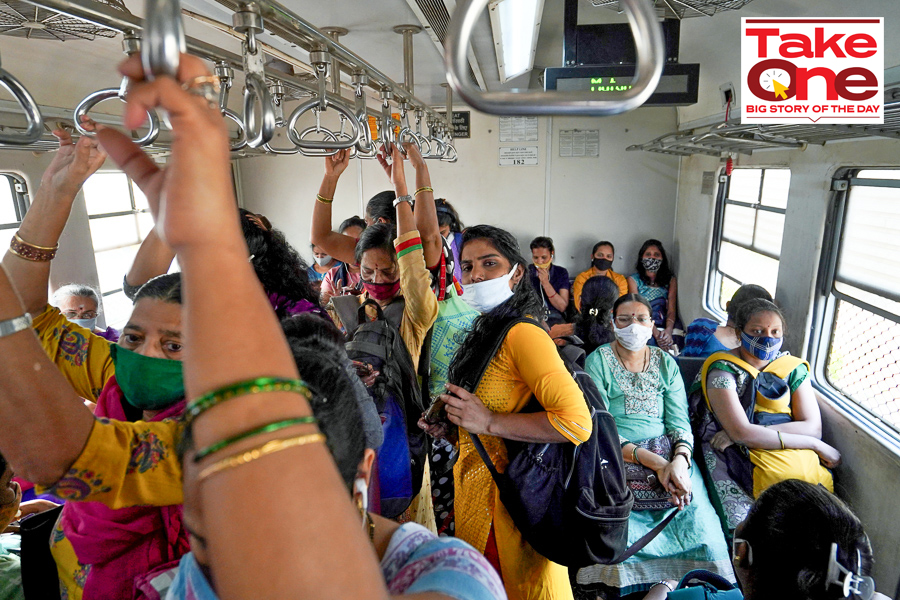 If we study the expenditure profile of the Union Budget of 2021-22, the gender budget has increased in absolute terms.

The budget estimate (amount outlaid for an expenditure at the start of the fiscal) stands at Rs 1.5 lakh crore, a marginal rise over Rs 1.4 lakh crore that Finance Minister Nirmala Sitharaman had allocated in 2020. However, over the course of the last fiscal, the gender budget was revised to Rs 2 lakh crore to meet additional expenditures due to the pandemic. Compared to that, the current budget estimates fall short by around Rs 53,000 crore.

The gender budget, as a percentage of overall expenditure by the government, has fallen to 4.5 percent in FY22, compared to 6 percent according to last year’s revised estimates.

In her 2019 Union Budget speech, Finance Minister Nirmala Sitharaman stressed on the equality of men and women in India’s development story, and called for fiscal allocations to be more gender-sensitive. Until then, gender-responsive budgeting (GRB), which India introduced as part of the Union Budget since 2004-2005 to ensure public resources are spent in a way that bridges the systemic inequalities between men and women, had stagnated at below 1 percent of India’s Gross Domestic Product (GDP).

The gender budget statement is divided into two parts, depending on the intensity of the gender component in public expenditure. Part A includes schemes that are 100 percent targeted for women, while Part B is composite schemes with at least 30 percent benefits to women.

FM Sitharaman’s 2019 announcement of making gender budget a priority and also form a committee to streamline targeted allocations was a ray of hope. In 2020-21, the gender budget was 1.06 percent of the GDP, the highest it had ever been. Cut to the Union Budget for FY22 presented on February 1, and the allocations are back to their conventional range, hovering around 0.7 percent of the GDP. The FY22 budget estimate projects GDP at Rs

22,287,379 crore, assuming 14.4 percent growth over the estimated GDP of Rs 19,481,975 crore for FY21. While Sitharaman made the announcement in February 2019, the committee was notified only towards the end of that year, according to sources. The members of the committee, comprising gender experts and policy think tank representatives apart from government officials, met more than once in 2020, and have submitted a report of recommendations for improving gender-responsive budgeting. They are yet to receive a response from the government.

In the gender budget for 2021-22, economists and policy experts say the overall allocations and outlays for individual schemes that are important for women have been disappointing, given that the pandemic not only hit women harder than men, but also more women than men worked as Covid warriors and frontline workers.

Human development indices look bleak too: The Global Gender Gap Report 2020 released by the World Economic Forum (WEF), for instance, indicates that India slipped four ranks from last year to 112 among 153 countries. The economic disparity between men and women in India is particularly staggering, according to the report, with only one-third (35.4 percent) of the distance being bridged. India ranks among the bottom four countries of the world when it comes to economic participation and opportunities for women (rank 149), followed by health and survival (rank 150).

Consider this: In the Budget, close to 86.5 percent of the overall Rs 1.5 lakh crore allocation has been cornered by five ministries, leading with the ministry of rural development, followed by health and family welfare, women and child development, agriculture and human resource development.

“It is only the obvious programmes that are getting space in the gender budget. A lot of other departments, like MSMEs, textiles, law and justice, which also impact the lives of women, are not reflected in the allocations,” says Sona Mitra, principal economist, Initiative for What Works to Advance Women and Girls in the Economy (IWWAGE). According to her, allocations must be outcome-oriented and be targeted according to the realities of women and their needs on the ground. “For example, a bigger allocation towards road transport could improve the mobility infrastructure for women, whereas an outlay towards textiles can go a long way in empowering workers in the garment industry, 70 percent of whom are women,” she says.

Mitali Nikore, founder of economics research and policy think-tank Nikore Associates, agrees. According to her, the Covid-19 pandemic severely impacted gender equity in five key areas: Jobs, mobility restrictions, increased burden of unpaid domestic care work, digital gender divide and domestic violence. She says that while the allocation of Rs 120 crore towards digital literacy for women will help, outlays for various other key schemes, like domestic violence, creche facilities etc, have been combined under new heads like Sambal and Samarthya. “It becomes difficult to predict what the allocations for specific schemes will be under these larger headers,” she says.

For example, take the case of the government’s flagship scheme to improve education and welfare services for the girl child: When ‘Beti Bachao, Beti Padhao’ was introduced in 2015 with an initial funding of Rs 100 crore, the scheme launched by Prime Minister Narendra Modi saw a big investment push in subsequent years, reaching Rs 280 crore each in 2018 and 2019, and Rs 220 crore in 2020. A closer look at the Union Budget for FY22, however, indicates no funds have been specifically allocated for the programme. Further, it has been clubbed along with other schemes like Pradhan Mantri Matru Vandana Yojana (maternity benefit programme), gender research, skilling and training. “In this case, what can be harmed is the individual allocations towards schemes, because clubbing outlays gives space for juggling funding between programmes. So the allocations towards Beti Bachao could be reduced or zero, and be turned toward Matru Vandana, if that is the government’s priority,” she says. “The exact allocations will be known only next year when we see the detailed demand for grants.” According to Mitra, usually, schemes are clubbed under a single head to improve monitoring efficiency, and while it might not cause too many implementation difficulties, tracking allocation numbers to understand which scheme got how much might be a challenge.

Fiscal councils, which usually take up the analysis relating to deviations in fiscal allocations are absent in India, points Lekha Chakraborty, professor at National Institute of Public Finance and Policy and an economist who helped institutionalise gender-responsive budgeting in India back in 2005. “The financing of gender equity models needs to be built in by identifying the needs and revealed preferences of women with clear outcomes. A roadmap of these gender budgeting components to reach the outcomes can be designed case-by-case,” she says.

Nikore recommends that even within the resource envelope of the 2021-22 gender budget, new schemes can be introduced to support employment creation through targeted wage subsidies for re-employing women especially in sectors that have been hardest-hit by Covid-19, like food processing, MSMEs, hospitality and travel.  “Schemes and initiatives implemented under the Atmanirbhar Bharat Abhiyan packages also need to have a gender lens,” she says. “Their audits should be undertaken to analyse the gender sensitivity of the government’s post-Covid-19 response.”

Mitra of IWWAGE adds that, for gender audits, it is essential to make a provision for gender disaggregated data in the outcome budgets of the ministries/departments that have undertaken GRB, which is currently missing. “We need data to see whether programmes targeted for women and directed at specific outcomes are realised or not, and plug in the gaps.” She explains that the momentum to produce gender disaggregated data has been lost over the years.

“The ministry of women and child development (WCD) is responsible for pushing other ministries and departments to adopt gender-responsive budgeting. While it has managed to convince some, it has not been able to do it properly with many. For example, it has not been able to push the ministry of statistics and programme implementation, which is responsible for data collection.” In 2015, the WCD ministry released a handbook on gender budgeting, offering states comprehensive implementation guidelines. Yet, as of today, only about 16 states have undertaken GRB.

Chakraborty says the size of the gender budget is determined by the overall fiscal rules framework, and the fluctuations in the allocations of the gender budget broadly capture this macro-fiscal reality. “If the fiscal consolidation path is achieved through expenditure compression rather than tax buoyancy, its impact will definitely spill over to human development related spending,” she says, adding that the gender budget is an accountability tool and the first step toward budget transparency. “But budget transparency per say will not lead to accountability,” she explains. “At least we are able to ask these questions about the volatility in gender budget allocations, just because the statement is on since 2004. That’s an achievement. However, accountability mechanisms need strengthening.”

All this can change, and gender-responsive budgeting can be taken to the next level, if there is continuous and sustained training of all departments and ministries, Nikore says. “We have to undertake capacity-building and training both at the centre and state-level to roll out the process of gender responsive budgeting properly.”

Tweets by @forbesindia
Andy Jassy: The man who hit Jeff Bezos on the head, and built AWS, to be Amazon's next CEO
The duo using drones to help farmers