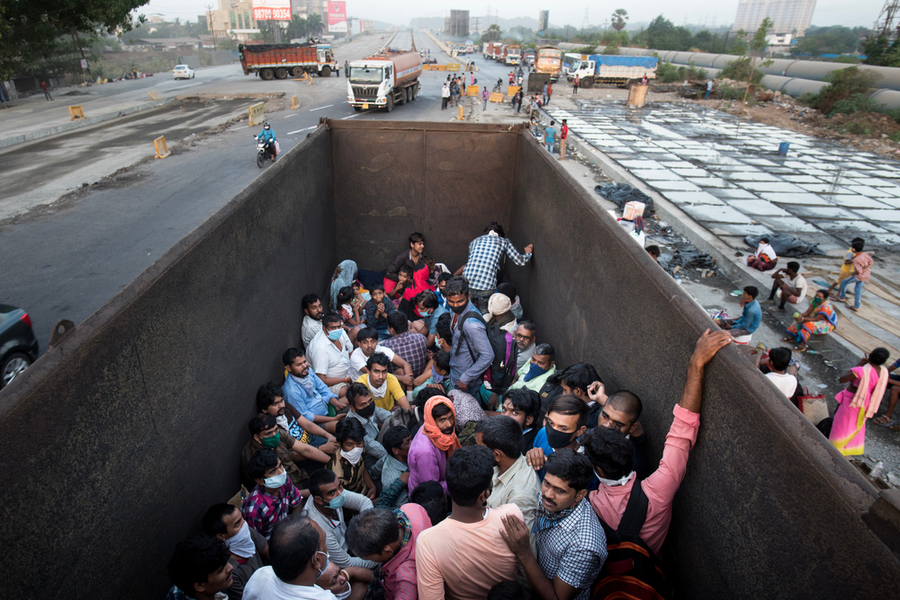 Migrant workers on a truck on the Mumbai highway
Credit: Shutterstock

The government plans to launch a common portal for the unorganised labour sector. It will collect information on gig workers, construction workers and others, and use it to “formulate health, housing, skill, insurance, credit and food schemes for migrant workers”. Finance Minister Nirmal Sitharaman, however, did not specify what kind of information will be collected from such workers to populate the portal and how schemes will be formulated using the data.

The Covid-19 pandemic saw multiple attempts by the government to monitor the movement of migrant labour across the country. One of them was the National Disaster Management Authority’s (NDMA) National Migrant Information System (NMIS), an online dashboard “to capture the information regarding movement of migrants and facilitate the smooth movement of stranded persons across states”. NMIS was meant to act as a central repository to allow states/districts to seek and give permission for the movement of migrants. It collected data, including name, Aadhaar number, age and mobile number, among other details. The status of NMIS is currently unknown. Forbes India has reached out to the NDMA about how this new portal will interact with NMIS. The problem with such a portal is that the government has been on a data collection spree ever since Aadhaar was introduced in 2009. The stated aim has been to formulate data-backed policies, but both UPA-II and the Narendra Modi governments have failed to provide evidence of where such data collection activities have led to effective policies. Instead, these data collection exercises have metamorphosed into integration of datasets across ministries and departments so that the government can create 360-degree profiles of its citizens for the purpose of surveillance. Case in point is this report. Drone-based rural title deeds to cover all states, Union Territories Sitharaman announced that the SVAMITVA (Survey of Villages Abadi and Mapping with Improvised Technology in Village Areas) scheme will now extend to all states and Union Territories. Under the scheme, rural areas are demarcated using drones and data collected from the drones is used to provide title deeds to owners of residential properties in rural areas. The scheme was introduced in April 2020 and aims to help villagers use their property to seek loans. The finance minister announced that about 1.8 lakh property owners in 1,242 villages have been provided the title deeds thus far. Similarly, the One Nation, One Ration Card scheme, which has thus far been implemented in 32 states and Union Territories, will cover the remaining states and Union Territories in the coming few months. It has reached 69 crore or 86 percent of the intended beneficiaries.  Artificial Intelligence, data analytics make an appearance E-Courts system will be implemented within the National Company Law Tribunal (NCLT) framework. In addition, in FY22, the government will undergird new MCA21 Version 3.0 with data analytics, artificial intelligence (AI) and machine learnings. MCA21 is an online portal where corporations, professionals and citizens can access services offered by the ministry of corporate affairs. The new version will also have additional modules for e-scrutiny, e-adjudication, e-consultation and compliance management. The buzzwords “artificial intelligence” and “deep analytics” also found themselves a place in an announcement about the goods and services tax network (GSTN). Sitharaman announced that deep analytics and AI have been used to identify tax evaders and fake billers, and special drives have been launched against them. “The results speak for themselves. We have made record collections in the last few months,” she said. To ease tax compliance and reduce discretion, a "faceless" Income Tax Appellate Tribunal Centre will be established wherein all communication between the Tribunal and appellant will be electronic. Personal hearings, when required, will be conducted via video conference. The government has been gradually implementing “faceless” interactions in the Income Tax department. In Budget 2020, the government said the Income Tax Act will include faceless appeals (Check). Before that, faceless assessment schemes were introduced to file returns, for assessment and for issuance of refunds. Other public technology-related announcements include: -        An indigenously developed automatic train protection system that will be used along high density network and highly utilised network routes of Indian Railways to prevent train collisions due to human error. - An outlay of ₹305,984 crore over five years to implement a scheme that would make power distribution companies viable. Through the scheme, the companies will be given assistance for infrastructure creation, including prepaid smart metering and feeder separation, and upgradation of system. This emphasis on smart metering is not new. Since 2019, the government has been planning to make a complete shift to smart meters by 2022, according to a Mint report. Last year, Sitharaman had announced that conventional electricity meters would be replaced with prepaid smart meters by 2023 to give customers a choice in rates and suppliers. This goal has now shifted to 2026 as per the outlay.  -  A new fintech hub will be developed at the GIFT-IFSC (Gujarat International Finance Tec-City – International Financial Services Centre). - An outlay of ₹50,000 crore for the National Research Foundation which was first announced in 2019. - Outlay of ₹3,768 crore for “the first digital census in the history of India”. No details of how it would be carried out. - ₹1,500 as “financial incentive to promote” digital payments - A new initiative—National Language Translation Mission (NTLM)—to make governance- and policy-related online content available in major Indian languages. The associated ministry and a budget outlay were not announced.