Forbes India 30 Under 30 2021: A feast of creativity and performance

The 20s is easily the best decade for creativity and imagination; for innovating and starting up. Which is also perhaps the best reason for Forbes India drawing up a list of go-getters and self-starters in their 20s (and younger) every year 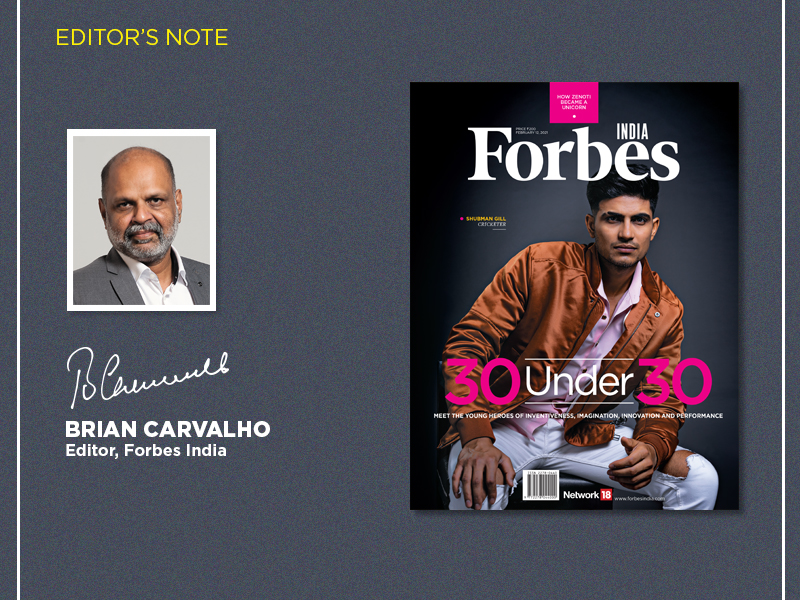 In one of the chapters of Walter Isaacson’s riveting biography of Steve Jobs, the digital visionary declares, just before turning 30: “It’s rare that you see an artist in his thirties or forties able to really contribute something amazing.”

Jobs may have well been speaking about himself, having revolutionised personal computing in his 20s through Apple Computer. Incorporated in 1977, the company with Jobs and co-innovator and designer Steve Wozniak at the helm developed the Apple II, an improvement on version one (whose design Hewlett-Packard had rejected), with a keyboard and in a sleek plastic case. The Apple II was the harbinger of the PC revolution, something that Jobs foresaw.

The 30s began on a disastrous note for Jobs, with the Apple board ejecting the co-founder for not finding enough takers for the Mac. Jobs went on to start up NeXT Inc to build workstation computers for education. A breakthrough deal that would pay off in the longer term was the purchase of Pixar, a computer graphics firm that was part of filmmaker George Lucas’s production company, which Jobs built into an animation studio.

Apple, meantime, was losing its way, and by 1996 had racked up huge losses. A not-so-simple twist of fate resulted in Jobs, now in the fourth decade of his life, getting back to the company he co-founded. You could call that decade Jobs’ roaring 40s. As Isaacson writes: “…after turning forty in 1995, he flourished. Toy Story (a Pixar-produced first ever full-length computer-animated feature film) was released that year… In returning to Apple, Jobs would show that even people over forty could be great innovators. Having transformed personal computers in his twenties, he would now help to do the same for music players, the recording industry’s business model, mobile phones, apps, tablet computers, books and journalism.” Jobs died in 2011 at 56, a year and a half after the launch of the first iPad.

Clearly, Jobs proved his own early notion wrong, that creativity dries up post-20s. In fact, Jobs had told Issacson in 2009, in one of the over 40 interviews for the book, that the past 12 years of his life had been his most productive in terms of creating new products.
Yet, what Jobs’ life trajectory does determine is that the 20s is easily the best decade for creativity and imagination; for innovating and starting up.

Which is also perhaps the best reason for Forbes India drawing up a list of go-getters and self-starters in their 20s (and younger) every year. It’s not just because it’s cool to be young; as Jobs proved, you can get cooler as you grow older. It’s just that it helps to begin early when passion and energy are at peak levels. Of course, how one flowers intellectually in one’s junior years in school has plenty to do with how one turns out in the 20s. Jobs, for instance, was as obsessed with science, tech and electronics as he was with Shakespeare (King Lear), Plato, Moby Dick, the poems of Dylan Thomas and music [“The best music came from here (the Bay Area)—the Grateful Dead, Jefferson Airplane, Joan Baez, Janis Joplin—and so did the integrated circuit,” Jobs told Isaacson.]

The Forbes India 2021 30 under 30 list is a moveable feast of creativity and performance in varied fields, from science and engineering to sports and entertainment.

And one more thing: If it’s digital innovation—which, let’s face it, is where much of the action is concentrated today—experience is pretty uniform, whether you’re 25 or 52. The internet, after all, like many of our 30-under-30 heroes, is only 25 years young.

Tweets by @forbesindia
Budget 2021: Financial inclusion means new portal for unorganised labour sector
Budget 2021 Highlights: From healthcare to investors, who got what