The fintech unicorn has gone beyond payments into neobanking and facilitating loans and insurance. The dream is to become the only financial platform a business will ever need 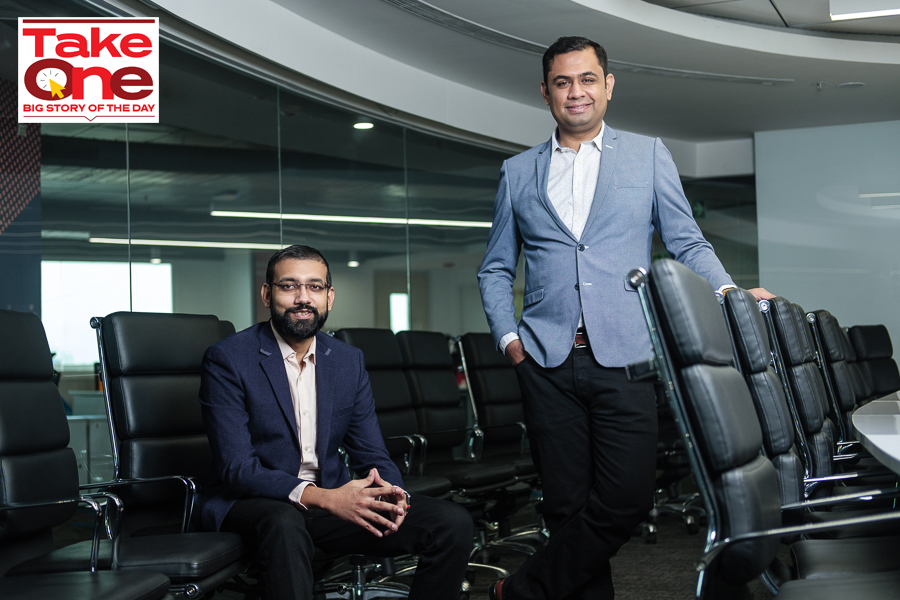 Deepak Abbot, co-founder of Indiagold, had a small story about fintech unicorn Razorpay recently, which he recounted on Twitter. Indiagold, a Gurugram-based startup that offers gold loans and coins via an app, ran out of balance at one of its bank accounts one Saturday night in early February after Abbot missed the email alert about it. The startup had regular payouts using that balance, and to make matters worse, the bank’s systems were under maintenance that night for eight hours. Abbot tried transferring money from his personal account but his bank had a 24-hour restriction after adding a beneficiary. And a transfer via unified payments interface couldn’t be done as the account where the balance was fast diminishing was a virtual one. A few other options didn’t work either, he recalled. “I pinged Harshil Mathur at 10.30 pm and asked for help,” Abbot wrote. He requested Mathur, co-founder and CEO of Razorpay, to add five lakh rupees to Indiagold’s balance. He knew it was a long shot because it wasn’t the payments platform’s responsibility to do this, but he tried his luck anyway. “I expected Harshil to pause and think but he said ‘let us add 10 lakhs just to be on the safer side’.” And even as the two were chatting, one of Mathur’s colleagues sent Abbot a WhatsApp message that money had been added to the account. “This is the startup collaboration and support system we need. This is how we grow the ecosystem together. I just can’t thank the whole Razorpay team enough for being so supportive and thoughtful,” Abbot wrote on Twitter the Monday after that weekend. “Customer for life,” he promised. If Abbot’s experience is less an outlier and more the norm for how Mathur and co-founder Shashank Kumar operate, it explains a bit about how and why Razorpay is doing so well in a crowded field where many payments services providers are vying for customers. And Covid-19 has helped because tens of thousands of businesses added digital payments options using Razorpay’s payments platforms, and millions of consumers took to making payments online using smartphones. Covid accelerated and compressed several years’ worth of adoption of digital tech into a year. It put an already vibrant fintech ecosystem in India into high gear, and investors in fintech startups anticipate the rise of many multi-billion dollar ventures in the sector. “The fintech space today is structurally poised for the big league—the founders are a powerful mix of financial services insiders and tech hackers,” Vikram Vaidyanathan, a managing director at Matrix Partners India, wrote in an email. Matrix was an early backer of Razorpay. Banks and infrastructure are now more ready for scale and speed, and consumers have more trust in technology to define their relationship with money, he said. “So, today I can tell you there will be multiple ‘decacorns’ in Indian fintech. I couldn’t make that statement in 2015,” Vaidyanathan added. By decacorns, he means startups privately valued at $10 billion or more. Razorpay became a unicorn—being valued at $1 billion—in October last year. The fintech market in India was valued at Rs 1,920 billion in 2019 and is expected to reach Rs 6,207 billion by 2025, expanding at a compounded annual growth rate of 22.7 percent, according to a May 2020 estimate by Research and Markets. At Razorpay, by July things were back at pre-Covid levels. And in roughly the last 12 months, payments volumes tripled over the previous year, Mathur told Forbes India in a recent interview. Razorpay’s efforts to simplify payments with its tools such as payments links, pages and buttons offered ways for merchants to quickly start accepting payments online without any cumbersome integration of their systems with Razorpay. This not only brought in many first-time users including small businesses, schools and restaurants, but freelancers and individuals as well. A whole ‘creator economy’ got a boost from the Covid-19 pandemic as people started monetising a wide range of activities from home—be it teaching music online or organising game shows or accepting donations for various causes. Many chose Razorpay. 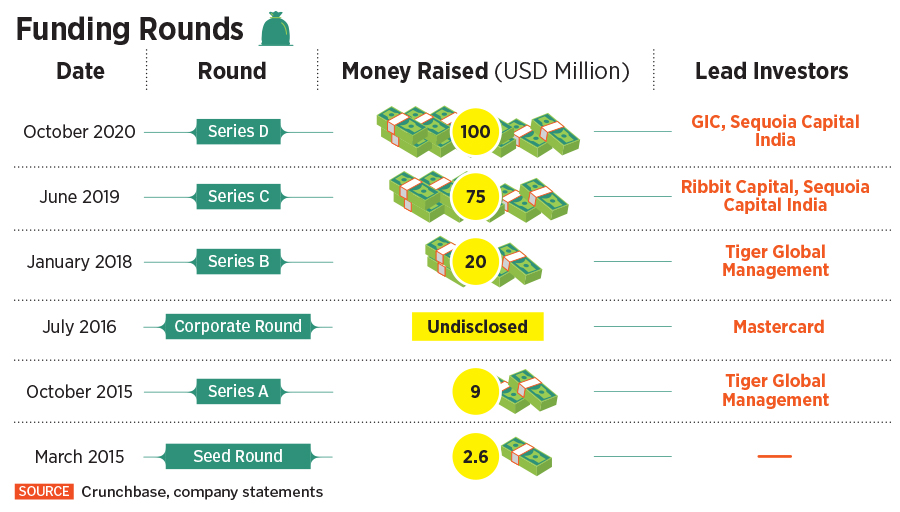 While no one could have anticipated something like the pandemic, Razorpay’s strong focus on products, churning out several of them every year—10 last year—helped the company add customers in multiple segments. When the pandemic hit, “we had a product for every use case,” Mathur says. The demand from freelancers, for example, was unexpected, but Razorpay already had the technology for individuals to quickly start accepting payments. Payments links, for instance, can be shared to accept payments straight from WhatsApp, Instagram, Facebook, and even just text messages. Second, the company has continually worked with banks and regulators to make it ever more easy for people to use its platform. When Razorpay started, some six years ago, it would take at least a week between a customer signing up and being ready to accept a payment online. Today it can be as fast as a couple of hours. Third, Razorpay’s tech infrastructure has been built with the need for scale in mind, especially as it serves customers like Flipkart, for instance, where there can be surges in transaction volumes during a popular flash sale or an event like the Big Billion Day sale and so on. “Today our platform handles 2,000 to 3,000 transactions per second, and that’s the highest in the country,” Mathur said. Amidst the pandemic, Razorpay raised $100 million in its biggest funding round so far, in October, in a deal that made the six-year-old Bengaluru fintech company a unicorn—valuing it at a bit over $1 billion. Investors in the funding round included Singapore’s GIC, Sequoia Capital India, Ribbit Capital, Tiger Global, Y Combinator and Matrix Partners India. Over the last 18 months, Mathur and Kumar have expanded their flagship payments business, but also added a neobank, called RazorpayX, and Razorpay Capital, a lending unit. They see their venture as a ‘full stack’ fintech provider. Last year they also started offering group insurance through partnerships with two insurers, Plum and ICICI Lombard. “Our goal has always been to help customers go fully digital, and that doesn’t happen with just payments being digital,” Mathur said. From paying suppliers to disbursing salaries to paying taxes, there are still many manual transactions that add a lot of friction to business operations today. One advantage of taking more of this digital is that it generates more data, which in turn can help businesses build a credit history and get better loans. With its neobanking unit RazorpayX, the startup allows customers to digitalise a multitude of different payments and money flows needed for their businesses. Or with salaries, a company has to only enter the ‘cost to company’ figure on RazorpayX and the platform will compute the different components such as contribution to provident fund, tax to be deducted and so on. “With one click, you compute and your compliance is met too,” he said. Having built the tech to help customers go digital with various payments processes, the next step was of course to add a lending unit too, which could take advantage of the data being generated. This unit was Razorpay Capital. Razorpay has tied up with various banks and NBFCs (non-banking finance companies), which can use the data on its platform to credit-score businesses and use those scores to give loans to them. This really took off during Covid-19, Mathur said, because it was a time when businesses needed money—and the data on Razorpay’s platform was more up-to-date compared with older balance sheets, reflecting how a business was actually doing during the pandemic. Today about Rs 250 crore in loans are being disbursed by the partner lenders monthly, based on credit scores computed with data from Razorpay’s platform. Starting these units wasn’t easy, Mathur said, especially because many banks were unconvinced that neobanking is the way of the future. While some banks understood the promise of these branchless digital banks, it took Razorpay over a year to convince a critical mass of banking partners so that RazorpayX could go live, although “we were talking about neobanking before it became the buzzword that it has,” he said. Razorpay makes money by charging fees for the transactions on its platform and for the various software-as-a-service tools that it offers. It also gets a fee from the lenders for helping them get customers for their loans. Revenue rose to Rs 509 crore ($70 million) for the year that ended March 31, 2020, compared with Rs 193 crore for the previous fiscal year. And in the last one year as well, revenue has surged about 2.5 times, Mathur said. Payments volumes on Razorpay are currently at $35 billion on an annual basis and the CEO expects it to double in the year ahead.

Tweets by @forbesindia
Photo of the Day: Death of an Angel
FILA 2021 Covid-19 Innovator: Prashant Warier, pivoting on point