Revv Up, Your H'ness

Honda, the biggest automatic scooter maker in India, is shifting gears by entering the 350cc segment and recalibrating its motorcycle strategy. Can it find its thump? 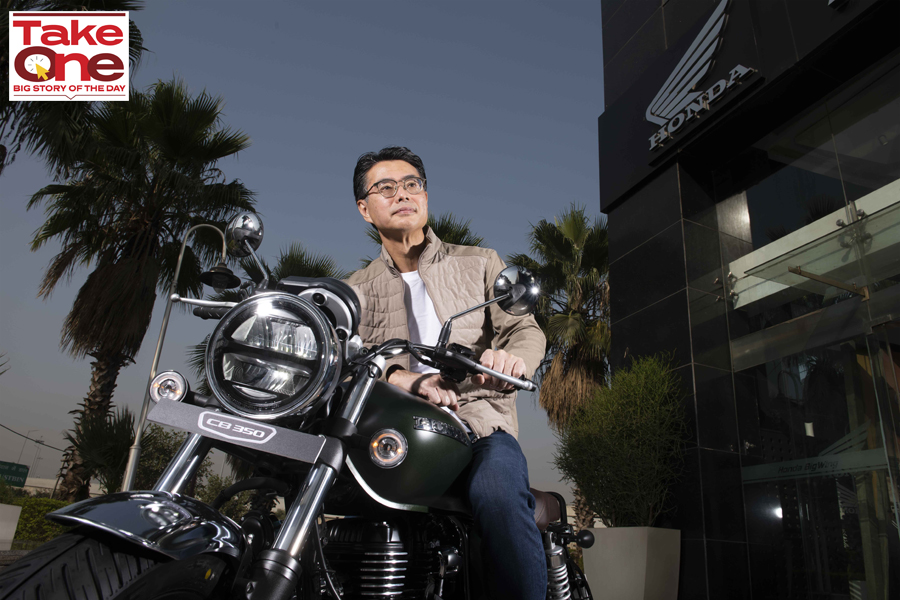 The ideation, and preparation for the 350 cc thump, started in 2017. Throughout the year, R&D engineers from the Tokyo headquarters of Honda Motor Co made multiple visits to a few cities in north and south India to get consumer feedback, and prepare a comprehensive blueprint. For Honda Motorcycle and Scooter India (HMSI), a 100 percent arm of the Japanese motorcycle maker, the idea was simple: To rev up its play in India. “In the 350 cc segment, the bikers are expressive and the bike personifies a rider,” says Yadvinder Singh Guleria ‘San’, director (sales and marketing), HMSI. “We were exploring what was missing, and what 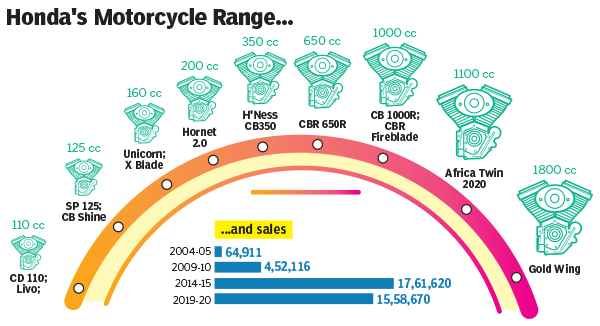 could be added.” For Guleria, who has had ‘San’, a Japanese title of respect, suffixed to his surname since March 2000 when he joined HMSI, the task was not easy.  There was the baggage from Honda’s joint venture (JV) with Hero, which started in 1984 and ended in 2010. The break-up of the partnership gave Hero a massive lead in the 100 cc-110 cc commuter bike segment, which has the largest volume of sales.

Honda’s solo play in India was constricted till 2010 because of two factors: It was not allowed to roll out any model in the first three years since setting up HMSI in 1999, which is why it launched its first bike Unicorn 150 cc only in 2004; Honda also couldn’t enter the commuter segment under the terms of the JV with Hero, thus missing out on the volume game.

Playing catch-up in the commuter segment didn’t make any sense for HMSI, which dominated the executive segment (125cc) with CB Shine, and so it zeroed in on a segment with headroom for massive growth: 350 cc.

350 reportedly making up over 75 percent of sales. This gave it a 95 percent share of the mid-weight segment. Not only had the Indian bike maker created the segment, it barely had any competition, with customers upgrading their vehicles to more premium models.

For Honda, globally known for bikes with large engines and a muffled sound, it seemed like a perfect opportunity and it began to gather customer feedback. Riders wanted a more comfortable ride with zero vibrations, a lighter bike that looked grand, a bigger fuel tank, and higher ground clearance. All this was implemented, except for the demand for a loud exhaust sound. While riders loved it, Japanese engineers found the thump too loud. After some debate between the Indian and Japanese counterparts, the former prevailed and Honda rolled out the H’ness CB350 in October.

“We are overwhelmed with the love and appreciation from customers,” says Atsushi Ogata, managing director, president and CEO, HMSI. “The Indian riders motivated the development of H’ness.” Ogata, whose stint in India started this August, has high expectations from the country, which is Honda’s biggest market in terms of volume. He acknowledges the pressure to ramp up its play in the scooter segment, where HMSI has over 50 percent market share. “The scooter market share [in India] is good,” he says, but Honda’s share in other Asian countries is much higher. “So if we compare this, we have low market share in India. Stakeholder pressure is very, very high.”

Not known for setting ambitious targets, Ogata has been trying to avoid talk about market share and daily targets. “At times, I become quite nervous because I wake up every day, go to the office, and get the evening result report against the day’s target,” he says. There is a lot of interest in the Indian market from the headquarters, but Ogata has found a way to tackle it. “I told them I need to fully concentrate on the Indian market. So, now there are no phone calls, and no emails from Tokyo.” What Honda needs to follow, he adds, is a plan of minimum commitment for every day and every month. “If we do that, market share will take care of itself.”

Honda, say auto analysts, is finally recalibrating its motorcycle focus and process in India. “With H’ness CB350, it is upping its game in India,” says Jaspreet Singh Bajwa, management consultant (automotive industrial consulting group) at Nomura Research Institute. While Honda’s share in the commuter segment fell from 55 percent in 2010-11 to 37 percent in 2019-20, the executive segment has gained a tad from 11 percent in 2015-16 to 14 percent in 2019-20. What this means is bikers are upgrading to the mid-weight segment (350-650 cc).

A generation of first-time bikers who are opting for 350 cc bikes is giving this segment much tailwind. For instance, Nishant Sharma (20), an MBBS student in Delhi, has grown up seeing his father ride a Royal Enfield and always wanted a 350 cc bike himself. Reason: More power, more brag value, more comfort and commute-friendliness. “H’ness CB350 ticks all the boxes,” says Sharma, who was one of the first to buy the bike in Delhi. “Globally, Honda is known for superbikes,” he says, and although in India Royal Enfield rules this segment, Sharma was looking for something more contemporary. For avid rider Mohit Ranjan (47) in Bengaluru, it was the excitement of a new bike in the market that made him buy the H’ness. “More and better options are always welcome,” says the vice president of an MNC. That he already owns a Honda Rebel 500 helped. “It was a no-brainer.”

For HMSI, too, opting for an inverted pyramid approach to selling bikes in India was partly by design, and

partly by default. In 2004, it rolled out the 150cc Unicorn because it didn’t have much choice under the JV with Hero. Two years later, it launched the 125cc with CB Shine, which became a blockbuster and remains the third-highest selling motorcycle in India after Hero Splendor and Hero HF Deluxe. Between this April and September, Hero sold over 9.48 lakh Splendors and 7.01 lakh HF Deluxes, while Honda sold over 3.69 CB Shines.

What, though, has remained mostly unchanged for HMSI over the last two decades are the chinks in its armour: A muted play in the commuter segment; premium pricing of models; and zero presence in the 350 cc segment. Ogata now wants to fix all of them.

The company is working on a plan to roll out a commuter bike that is also targeted at the rural population in terms of pricing. “We have competitors in India who have been managing such pricing, so why can’t we?” Ogata asks. “We have already proposed to Honda Motors to introduce new models catering to such consumers and have started this project.” The company’s engineering team is in touch with Indian suppliers to find ways to achieve target cost. “I know it’s hard, but we cannot survive for long in India, Africa or Latin America if Honda ignores such [price-sensitive] customers,” he admits. “In Africa, consumers are purchasing Chinese copycats that look like Honda. In Latin America it’s the same situation.” If Honda, he adds, needs to be a sustainable global company, then there has to be a change in mind set regarding pricing.

What Ogata is also trying to change in India is the mind set of Honda dealers and salespersons, who have traditionally opted for high-selling scooters in their showrooms. Their mentality, he says, is still concentrated on pushing automatic scooters because they are fast-moving models. “Now we need to prioritise other models in the motorcycle segment.” This is because, without a full line-up inside a showroom, a customer cannot see Honda’s full portfolio. “Dealers now must have the full line-up. It doesn’t matter whether the models are fast-moving or not-so-fast moving.” The consumer must have ample choice.

In 2017, Guleria had gathered what consumers wanted from a new 350 cc bike: A distinct thump, and the ability to turn heads. He added one more attribute: The bike should be gender agnostic. “H’ness personified everything.” There was a glitch, though. The name ‘Highness’ was too long to be printed on the bike. The solution was found in Japan, where Narita Express, an express train service, had found a shorter alternative—N’Ex. “Inspired by it, Highness became H’ness,” says Guleria.

Honda faces the twin challenges of slow execution and not making affordable bikes, says Amit Kaushik, managing director at Urban Science, a Detroit-based consulting firm. “It has to be done on a war footing.” The most critical challenge, he adds, is to rapidly expand the retail footprint of H’ness CB350, which has a new distribution structure. “The fight is not only from the deeply entrenched Royal Enfield, but also from Hero, which has tied up with Harley Davidson.” Hero, he adds, is not in the partnership only to manage the front-end. “They will surely come up with something in the 350 cc segment.”

The fight is also getting tough in the commuter and executive segments. While Honda is still working on an affordable 100 cc bike, Bajaj Auto has come up with the Pulsar 125 cc to rival Honda’s CB Shine. “Time, and speed of execution are what will decide how successful Honda is in its recalibrated bike strategy,” adds Kaushik.

Can HMSI make motorcycles a bigger component of its pie? “Well, what I can’t commit is numbers; but what I can commit is exciting times are here,” he says. Even in the history of Honda, he explains, Soichiro San (founder of Honda Motor Co) first rode on a motorcycle, and not a scooter.

In India, the automatic scooter is the mainstay. If that has to change, Honda has to crack the affordability code in the mass segment. Infographics designed by Sameer Pawar