The banks have seen their asset quality deteriorate due to the pandemic, but high capital buffers and lower cost of funds should help cushion the sector 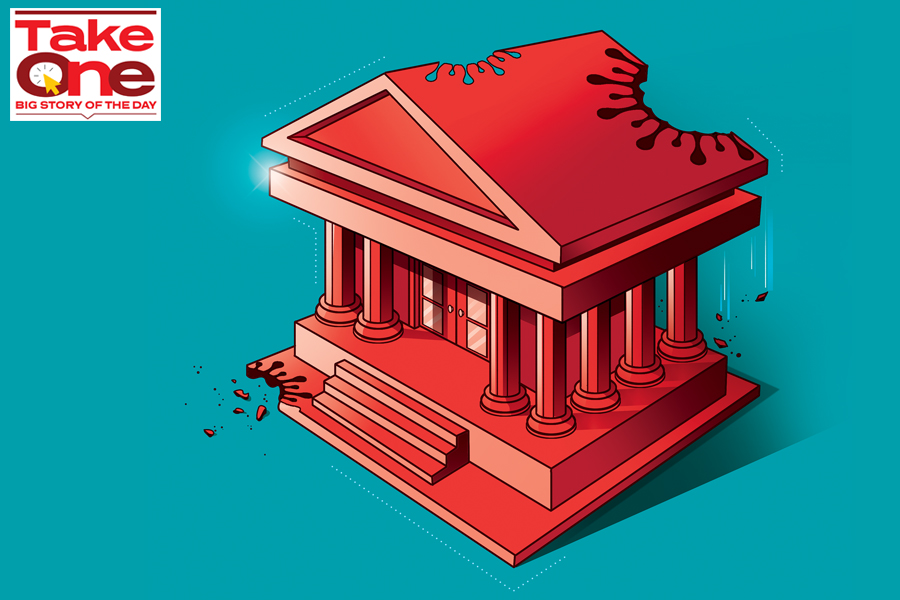 Kheda, an hour away from Ahmedabad, has for long been a testing ground for Fincare Small Finance Bank. Kiran Babubhai Chauhan, 42, and his wife Rina, 40, low-income farmers in Parsantaj village in Kheda district, were keen to boost their income but lacked the means to do so. In 2009 Chauhan started borrowing from Fincare, when it was still a microlender (Disha Microfin). The Chauhans started small, with a Rs8000 loan in 2009 for dairy farming. They now borrow Rs45,000 a year.
“Ame aa loan lidho che pashu-palan ane kheti mate. (We have taken this loan for both the dairy business and the agriculture business),” says Chauhan, speaking in Gujarati. The couple sells the vegetables they grow, tindli (ivy gourd), galka (sponge gourd) and lilva dana (a type of bean), at the local regional market in Kheda town. “Corona na vakte amne shaak-bhaji vechvani takleef thi hati, jyare mothi market bandh hathi. Vyapar mandi maan hati and dheere dheere sudri rayuch. (During Covid-19 we had trouble selling vegetables at the local market as it often used to be shut, which hurt income. Business was sluggish and is just slowly starting to improve),” he says. The dairy business has been less impacted by the pandemic and is faring better, he adds.
Without disclosing his monthly income, Chauhan says he earns a profit of Rs 10,000 per month, enough for him to pay his monthly loan instalments of Rs 2,400.
“Aama aagar jata aa banne business maa sudhar karsoon, toh loan aagar jata joise. (We plan to expand these businesses further, so may take more loans),” Chauhan says. Business, he adds, is starting to pick up again after months of sluggishness and his loan installments are now current.

Chauhan’s experience is hardly unique. And as businesses were shut during the two lockdowns since March 2020 a host of small finance banks, which have a total of Rs38,624 crore in microfinance loans according to industry association Microfinance Network, were hit. 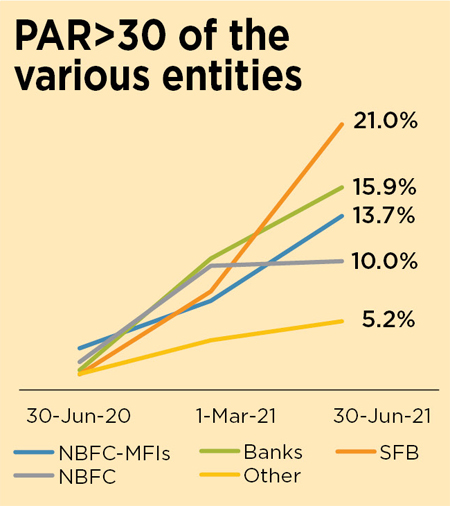 Under normal circumstances, since small finance banks lend to small borrowers, they are able to keep defaults in check considering there are no large loans that might affect default rates hugely. But with the pandemic a large section of borrowers saw their businesses either shut or affected, pushing up default rates. “When small business owners can’t open their shops there is little we can do but wait,” says P Vasudevan, CEO of Equitas Small Finance Bank.
Pre-pandemic NPAs averaged at 1-2 percent, which is about the same as for retail lenders. That number has now moved to as high as 6-7 percent. The delinquency numbers, too, as they stand, are high. Portfolio at risk >30—the percentage of the microfinance portfolio of eight small finance banks (SFBs) overdue by more than 30 days—is estimated to have surged to 21 percent as of June end, compared to 7.61 percent in March this year, according to data from ratings agency ICRA.
However, Krishnan Sitaraman, senior director and deputy chief ratings officer at CRISIL, points out, “Collection efficiencies have moved up in the last two months and incrementally they will continue to improve.”
While the final write-offs are still not known what emerges is a picture that shows that the new class of small finance banks (licensed by the RBI in 2017) will probably scrape through this crisis once the write-offs are complete. While some like Ujjivan Small Finance Bank may have to raise capital, others could see their return on equity stay subdued for a while.

NPAs, bankers say, are a result of their customer mix and most of the NPAs are the result of the portfolio mix. The legacy of several SFBs, who have emerged from being microfinance lenders, has meant that a majority of their loan book is skewed towards microfinance or MSME loans. Both these portfolios of unsecured loans are harder to make recoveries from. “An unsecured portfolio tends to have a cycle on account of group behaviour. Most of the losses [for SFBs] will be from the MFI portfolio,” says Rajeev Yadav, CEO of Fincare Small Finance Bank.
Most SFBs have recognised stress upfront and have accelerated provisioning. Sanjay Agarwal of AU Small Finance Bank says, “We look at this as a one-time event and will provision for it (through write-offs or increased capital) and then move on.” 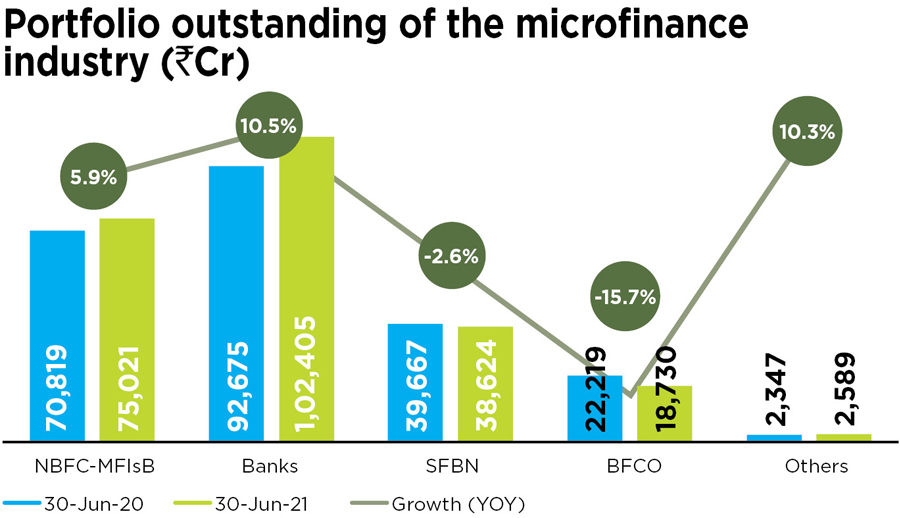 Ujjivan SFB, whose shares have nearly halved in 2021 to Rs 20.4 at the BSE, hurt by poor earnings growth and the exit of its former CEO Nitin Chugh in August, too has already made a Rs 11 crore provision on book restructured so far under Resolution 2.0.
Others like Equitas have handled the situation better. In Equitas’ case as 90 percent of customers (97 percent by value) took advantage of the moratorium announced by the Reserve Bank of India in May 2020, their NPA numbers, which are usually 2.6-2.7 percent, moved to 3.6 percent in March 2021 and 4.6 percent in June 2021. But Vasudevan says this number is manageable. Equitas, which saw an 80 percent drop in June-ended profit, made a provision of Rs 110.5 crore on the restructured book of Rs 897 crore.
Another factor that has worked in the banks’ favour is the lower cost of capital, which has fallen by 100-125 basis points in the last year. So far, lending rates for borrowers haven’t been lowered and this has allowed SFBs to cushion some losses from old borrowers.
Ajay Kanwal, a former Standard Chartered Bank veteran and current managing director and CEO of Jana Small Finance Bank, is confident that the pressures of weakening asset quality on SFBs will weaken. “The microfinance customer is resilient; they will bounce back from the current crisis. There will be months of discomfort but not months of disbelief.”

The market, meanwhile, is adopting a wait-and-watch attitude. Except for AU Small Finance Bank, which has a diversified loan book and trades at five times its book value, the other listed small finance banks—Equitas, Ujjivan and Surodyay—trade at about two times book or under.

As things stand, the 11 small finance banks that came up mainly through the micro-finance route have been able to reduce the cost of their borrowings, diversify into new business areas (commercial vehicle loans, small business loans) and move towards becoming universal banks. As per the RBI mandate, the banks must have 25 percent of their branches in villages with no banks. Half their loans should be less than Rs25,00,000 and priority sector requirements for SFBs stand at 75 percent instead of 40 percent for universal banks. 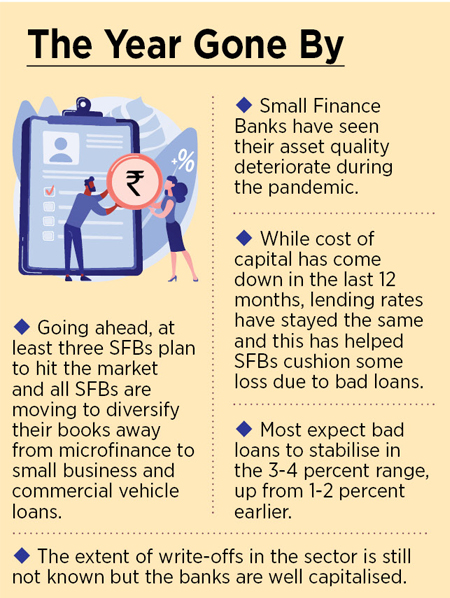 “From a growth perspective, SFBs are gradually diversifying into different product categories including property-backed loans, commercial vehicle loans and business loans, especially the SFBs which are predominantly unsecured-loan focused at present. Thus, it would be important for them to develop proper underwriting practices for these relatively newer product categories,” says Prateek Mittal, senior analyst (financial sector ratings), ICRA.
The ICRA team’s vice president and sector head Sachin Sachdeva says there is potential for several of these SFBs to grow to the next level but it will entirely depend on their “growth strategy on geographical expansion or diversification across products”.
In the current set-up, amongst the 11 banks, the North East Small Finance Bank (concentrated in the seven NE states of India and North Bengal) and Shivalik Small Finance Bank—which transitioned from a co-operative bank—are the two which might be limited in their reach or structure, or be able to expand in a rapid manner.

Most SFBs are well capitalised at this stage, with a capital adequacy in the 23 to 29 percent range, much higher than the 15 percent capital adequacy ratio (CAR) mandated by the RBI. And they are pushing ahead with their growth plans. Jana, ESAF and Fincare have lined up plans for IPOs.
As they expand their lending portfolio outside microfinance, investors are likely to get more comfortable with the predictability and durability of their earnings franchise. Just like in AU, SFBs’ case valuations could move closer to those of universal banks.

Tweets by @forbesindia
Photo of the day: Mumbai bridge has fallen
Merkel leaves the German economy with trouble under the hood