The good. The okay. And the ugly

With LIC preparing for a public listing, here's a look at its portfolio of investments 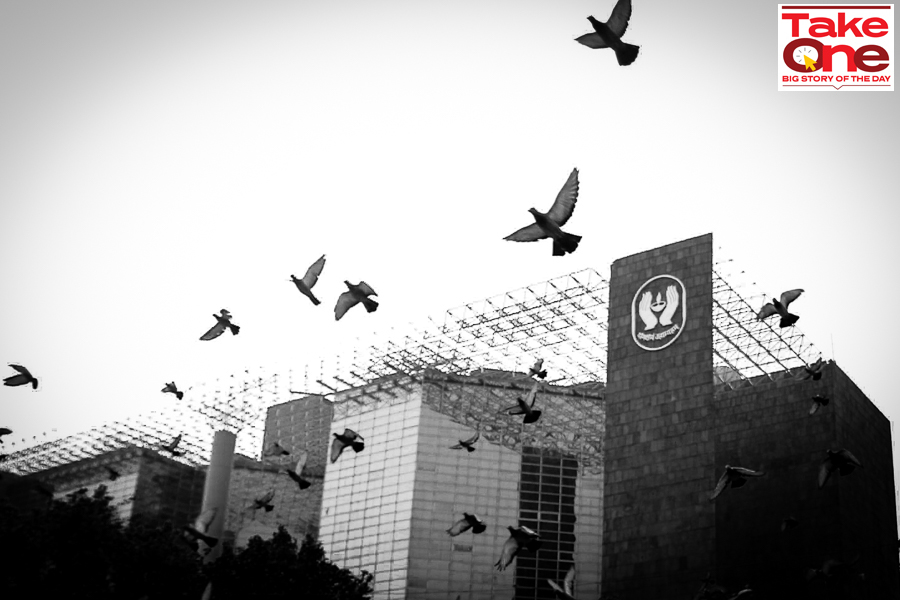 According to LIC’s September documents, over 90 percent of its policyholders’ equity investments in India are held in stocks that are part of the Nifty 200 and BSE 200 indices
Image: Nasir Kachroo/NurPhoto via Getty Images

It is no surprise that India’s largest insurer, Life Insurance Corp of India (LIC), invests in capital markets to make money for its policy holders. In fact, a year and a half ago or so, its total asset under management (AUM) was bigger than all mutual funds put together. According to LIC’s draft red herring prospectus (DRHP), as on September 30, 2021, its policyholders had total investments of Rs 39,49,516 crore on a standalone basis, which includes investments of more than Rs 9,78,493.81 crore in equities, representing 24.78 percent of its investments.

According to LIC’s September documents, over 90 percent of its policyholders’ equity investments in India are held in stocks that are part of the Nifty 200 and BSE 200 indices. According to a Crisil Report dated September 30, 2021, LIC’s investments in listed equity represented approximately 4 percent of the total market capitalisation of NSE as at that date.

Forbes India decided to pull out the entire list of LIC’s investments in Indian equities, with data being provided by PrimeInfobase.com.

According to PrimeInfobase.com, a capital markets data provider, LIC owns 48 of Nifty Top 50 stocks, which includes the likes of Larsen & Toubro Ltd, where it holds 12.62 percent worth Rs 30,189 crore.  Other stocks where it owns more than 10 percent holding includes Adani Ports & Special Economic Zone worth Rs 15,829 crore, Coal India Ltd worth Rs 12,554 crore, Grasim Industries and others. It completely offloaded 5.93 percent stake in Power Grid Corporation of India in the September quarter; the value of its shares was worth Rs 7,211 crore. 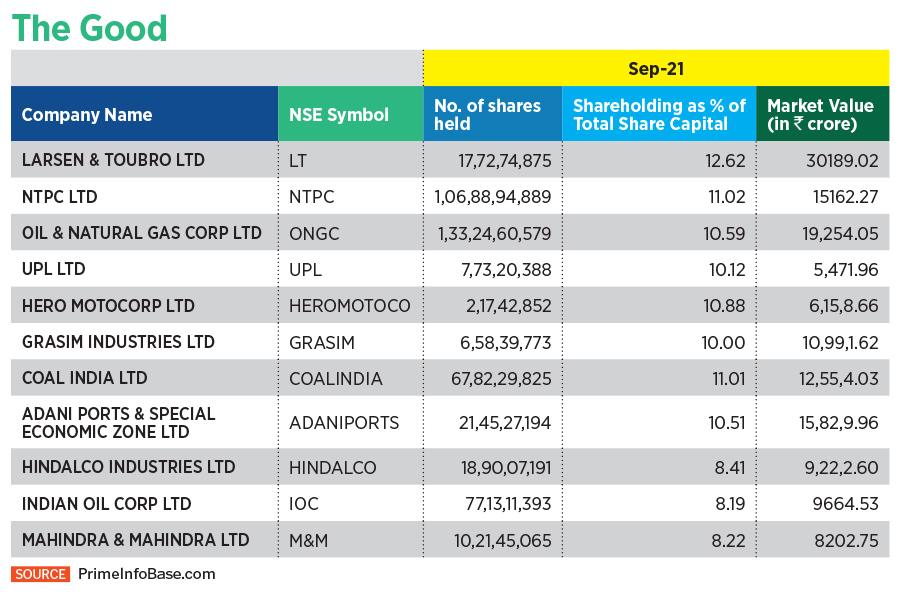 Its Nifty 100 exposures are companies across private and public enterprises, with the likes of State Bank of India and Bajaj Auto. But one thing that stands out in its mid cap exposure is that—if you leave its subsidiary LIC Housing Finance out of the equation—except for Rajesh Exports and Lupin, all others in the top 10 in terms of shareholding are government-owned entities. Which brings forth the question: Will LIC continue to be a saviour for the government even post the listing. In 2014, LIC and other public banks had rescued State Bank’s qualified institutional placement.

LIC’s capital market exposure has come down to an all-time low in the December quarter. According to primeinfobase.com, LIC owns 3.67 percent of the total listed universe based on available disclosures, the lowest since at least June 2009. Pranav Haldea, managing director at Prime Database, says, “LIC has been trimming its holdings and booking profit in many counters.” 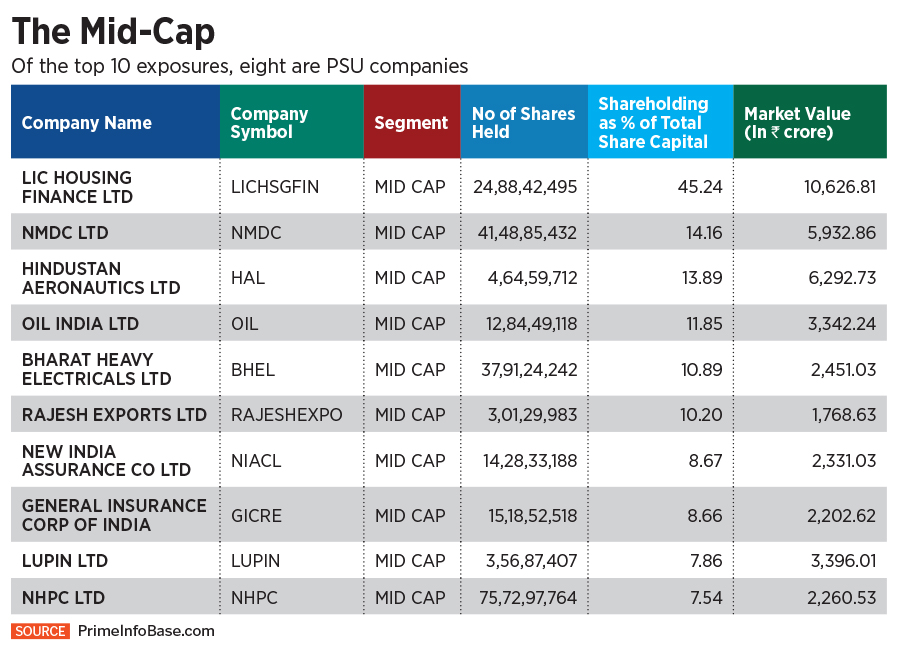 He adds, “LIC is and always has been an important investor in the Indian market. It has also been a contrarian investor by force. Whenever there has been heavy selling, especially by FPIs, the insurer has been called upon to stabilise the market. In the process, it has also ended up accumulating good quality stocks at attractive valuations. It has also been called upon to rescue several public sector IPOs and also QIPs by public sector banks.” 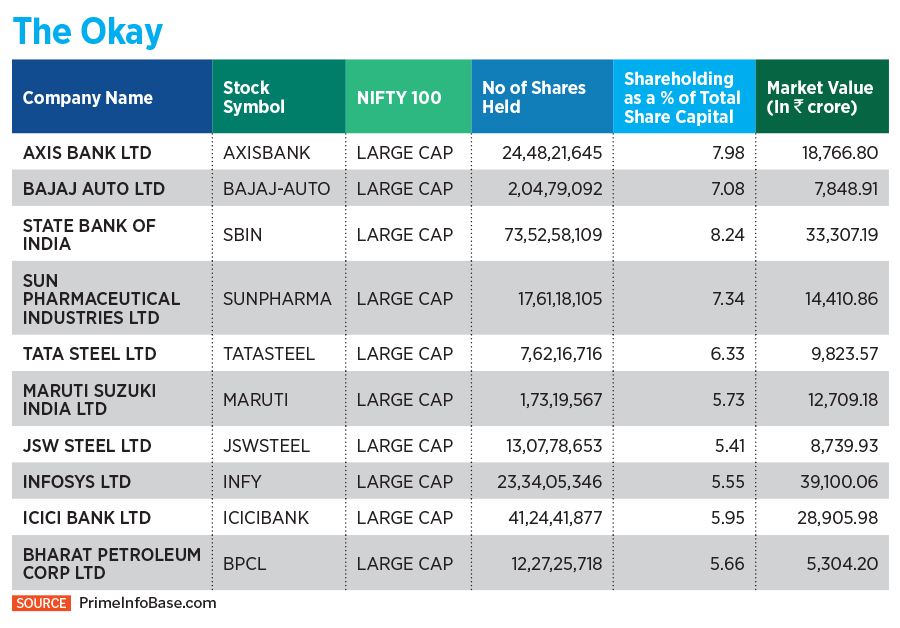 The insurer owns a bunch of companies that are now in the bankruptcy process, or are heavily stressed. For example, it owns 1.63 percent in Jaiprakash Associates, one of the companies in the midst of the bankruptcy process; its share value fell from Rs 50.13 crore in the June 2021 quarter to Rs 35.15 crore during the September, 2021.

Until a few years ago, it owned some of the dirty dozen companies that were sent into the bankruptcy process by the Reserve Bank of India. These include Electrosteel Castings Ltd, Alok Industries, and Jyoti Structures; others include ABG Shipyard, CG Power, Lanco Infratech.

Currently it holds a bunch of Anil Ambani-owned companies, of which its highest stake is in Reliance Communications at 4.31 percent, valued at Rs 36.94 crore at the end of the September quarter. To be very clear, the values quoted here are at the end of its holding period and does not show the real picture of when it bought the shares and how much it has paid. Almost all these companies have seen value erosion over the years, hence, the data on write-offs is not available. 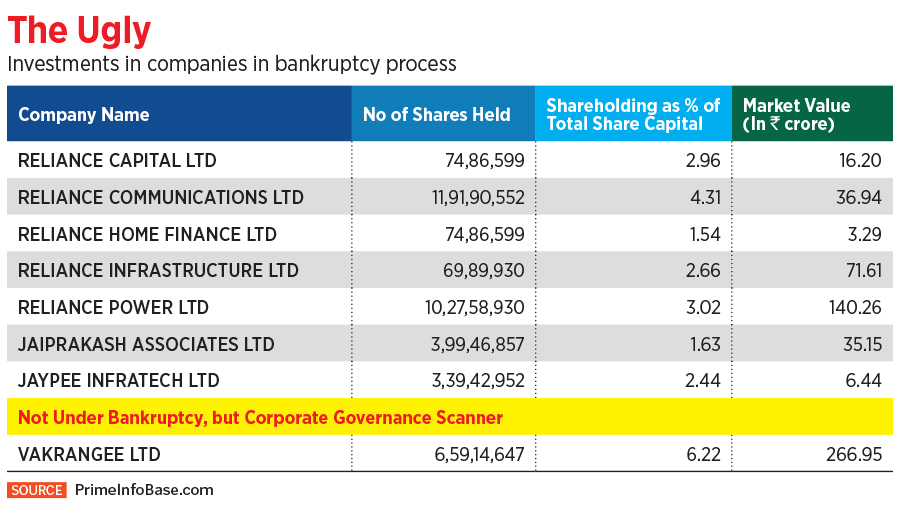 Tweets by @forbesindia
Find the right fit, not degrees for the job: Groww's Sweta Gupta
Jani Pasha on building the hyperlocal playbook, and experiments with monetisation at Lokal