Find the right fit, not degrees for the job: Groww's Sweta Gupta

Gupta has seen her share of ups and downs, and in the end has come away with a strong belief that it takes much more than CVs peppered with Ivy League degrees to be picked for the job 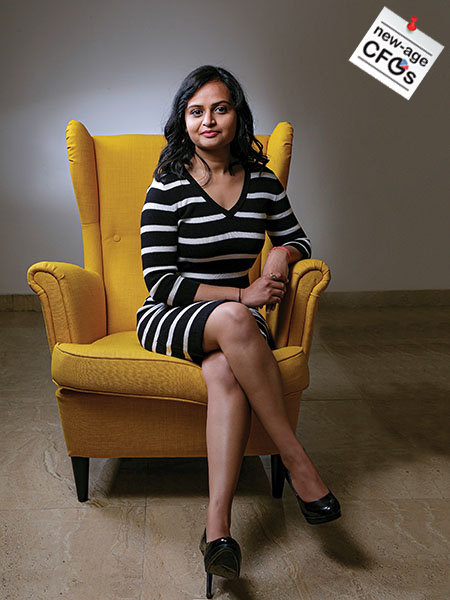 True value unlocks when growth is sustainable and can fund itself in the long term: Sweta Gupta
Image: Madhu Kapparath

The credentials carried a lot of heft. And why not? A clutch of professional degrees from Ivy League universities, and a couple of brief stints at retail firms, garnished the impressive CV of the candidate who was cocksure about his being a prized catch. And if the past was anything to go by, he thought, the interview would last for only five minutes, and the salary negotiation would be the only thing to thrash out.

Twenty minutes into the gruelling session came the first shocker. “I don’t think you are fit for the role,” Sweta Gupta made a blunt assessment after an intensely probing question-and-answer session. The candidate looked stunned. The vaunted degrees, which he had flaunted as war trophies till then, turned out to be empty calories. “They definitely qualify you for the job. But you don’t have what it takes,” Gupta made her concluding remark, wishing him good luck for the future.

Back in August 2019, it had been Gupta’s turn to feel devastated. For a different reason, though. The electrical engineer started her career as a graduate analyst at Barclays Capital in 2010, did heavy lifting during her four-year tenure at Novartis, and joined SRS Lifesciences as CFO in 2018. She then took a sabbatical for personal reasons, and now after a year, she was back in the job market. The exceptional performer was supremely confident of landing a job.

What Gupta got, though, was a spate of crude rejections from recruiters. Interestingly, most of the reasons were insanely frivolous. “You don’t have a CA degree,” was the first jaw-dropper. Gupta tried to reason. “What do you mean? I was a CFO in my last stint. Look at my work,” she implored. Her explanation didn’t cut much ice. “You have never worked in India,” was the second bombshell dropped on the beleaguered finance professional who had spent nine years working in Singapore and Switzerland. The third reason to reject Gupta was the most outrageous. “You have been out of a job for almost a year,” said one of the interviewers. “Won’t you feel out of place?”

Her world was crashing around her. Gupta’s dream run at Novartis, where she joined under the finance leadership programme in 2013 and rose up quickly to become the commercial strategy manager in a global role, looked like a joke. “Everybody was rejecting me,” she recalls. The irony was, she continues, the job was denied on grounds that had nothing to do with work experience, achievement and merit. “It shook me to the core,” she says. 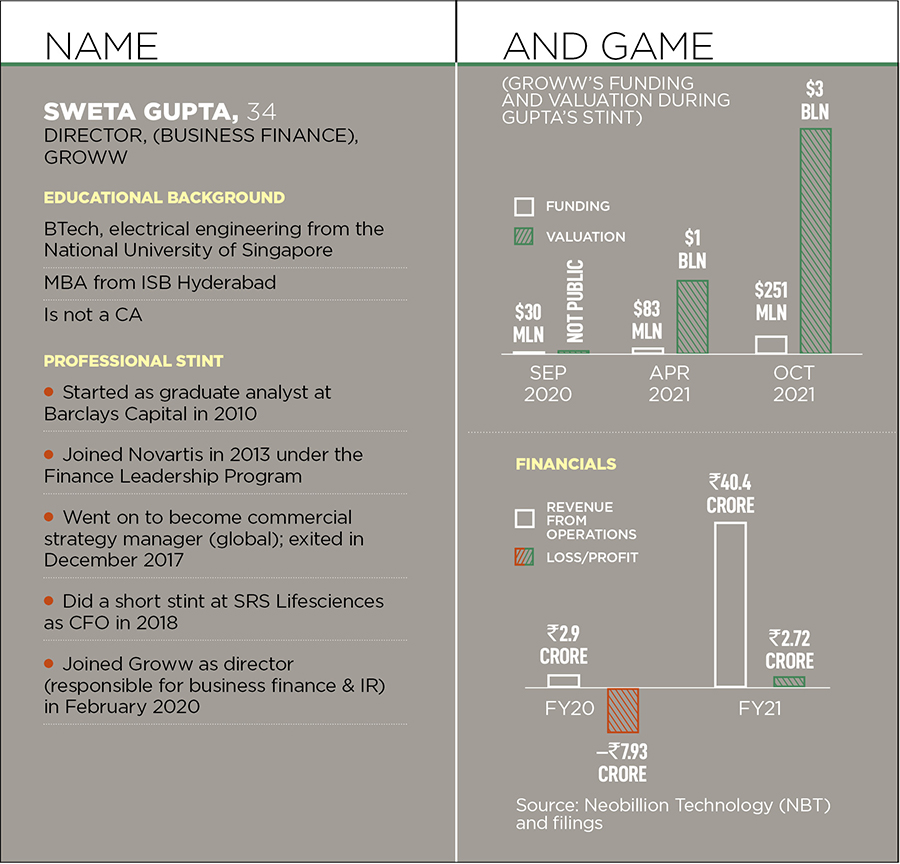 After six months of nays the elusive yes came along. And it was not from a traditional company but fintech startup Groww. “I was the first finance leadership hire for them,” says the 34-year-old, who joined the company in February 2020. Over the next few months, Gupta proved a point to herself. Questions were raised about her abilities, and she answered them. In September, Groww raised $30 million. Seven months later, in April 2021, the startup raised $83 million at a valuation: of $1 billion. Groww became a unicorn.

The funding spree continued. In October came the biggest round of $251 million, and its valuation soared to $3 billion. The quick pace of capital raising and steep valuation matched with the financial performance. In FY20, operating revenue stood at ₹2.9 crore, and the loss was ₹7.93 crore. A fiscal later, the top line grew by over 20 times and the loss changed into a tidy profit: ₹40.4 crore and ₹2.72 crore, respectively. “True value unlocks when growth is sustainable and can fund itself in the long term,” says Gupta, giving an insight into the thinking of new-age finance leaders. The magic, though, happens when one strikes a balance between quick wins in the short term, and operational and strategic advantage in the long term. Increasingly, finance needs to shift focus from cost reduction to increased effectiveness of spends in value-adding activities, she avers. “This leads to a smooth and sustainable future,” she adds.

Back in 2009, she had a rough start to her professional life. Born and brought up in Dehradun, Gupta didn’t want to become a doctor. So for ‘bright’ students, engineering was then the second-best option. She went to Singapore on a 100 percent scholarship and completed her electrical engineering from National University of Singapore (NUS) in 2009.

The timing proved to be terrible. In October 2008, the subprime mortgage crisis hit the world. Merrill Lynch, where Gupta did her internship for six months, retracted the pre-placement offer in 2009. As the crisis worsened, job offers almost dried up, and the ones that did come up didn’t have much appetite to pay. “I managed to get a few but all were almost half of the normal,” she recounts. Then came the big break. Gupta got through the trainee management programme of one of the top MNCs. The roadmap was clear: Reaching the CXO level in two years. That’s what the programme was all about.

The fleeting success turned into a nightmare. Due to harassment, Gupta had to quit in a few weeks. In fact, she had to fly back to India as her visa expired.

Luckily for her, Barclays Capital took her on as a graduate analyst in January 2010. “That proved to be a turning point,” she says. So far, Gupta thought her calling was in coding, but her boss at Barclays spotted something that even the young grad didn’t know. “You would make a good business analyst,” was what she was told after a few weeks of work.

For somebody whose exposure to finance was confined to internship, the new self-discovery was startling. Gupta, interestingly, was responsible for exposing her hidden talent. Whenever she was put on a project, she would not start work unless they explained where her work fit into Barclay’s larger scheme of things. Asking questions at every stage of her work led to a deeper understanding of the business and clients.

The next stint at Novartis in Switzerland gave her more responsibility, multiple roles, global exposure and loads of confidence. From business planning, analysis, setting up new units, managing investor relations and marketing, to heading finance and support services in HR and legal, Novartis broadened her horizons and taught her how to operate in companies with massive scale. And then after a short stint as CFO at SRS Lifesciences in Singapore, Gupta joined Groww in India.

Is there one big lesson that has helped Gupta grow in life? “I hire people who are fit for the job, and not those who are qualified for the job,” she says with a smile.

Tweets by @forbesindia
Actyv.ai raises USD $5 million in pre-Series a round
The good. The okay. And the ugly