The 34-year-old head of finance and chief strategy officer at Byju's is an engineer-turned-teacher-turned-strategist. She's the stronghand behind many physics-defying moves that the edtech giant has made across the world 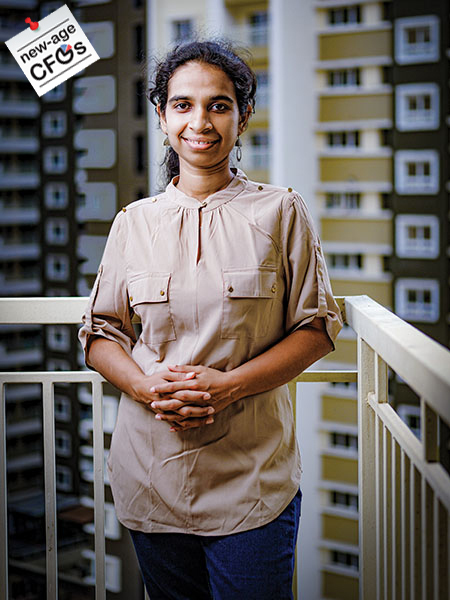 The biggest risk you are taking is not taking enough risks: Anita Kishore, head of finance and chief of strategy officer, BYJU's

In January 2019, Anita Kishore was taking her biggest, and boldest, bet. The timing seemed perfect. The engineer started her career as a consultant with the Boston Consulting Group in 2009. To continue with her passion for teaching, she took classes over the weekend for the next three years, and finally joined Byju’s in 2012. Over the next seven years, the maths and physics teacher diligently followed Newton’s Laws of Motion.
During the first few years, Byju’s, for sure, was an object in motion, growing at a constant speed. What this meant was making quick and decisive financial moves. “Any decision can’t be taken in isolation,” says the head of finance. “It has to be taken in the context of what the needs of the business are,” she adds, underlining the financial strategy in new-age, high-growth companies. By 2019, the edtech player had gathered enough pace and become the biggest in the segment. By snapping up four acquisitions since 2015, Kishore, who also dons the hat of chief strategy officer, had applied enough force to accelerate the growth across India.
Now, in January 2019, Kishore was getting anxious. Byju’s was about to make its first global acquisition, and the chances of the third law of motion—for every action (force) in nature, there is an equal and opposite reaction—playing out in full force was high and realistic. The reasons were simple. The biggest was the risk of the unknown. Byju’s was not present in the US market. Osmo, the edtech firm that Byju’s was about to buy, had a flat growth for the previous two years and had a revenue of $25 million in FY19. Second, Osmo’s offering—a blend of physical and digital learning for kids—was different from that of Byju’s. Third, the deal was going to cost a bomb: $120 million. The ingredients were perfect for any traditional CFO to play by the book and stay away from the deal. 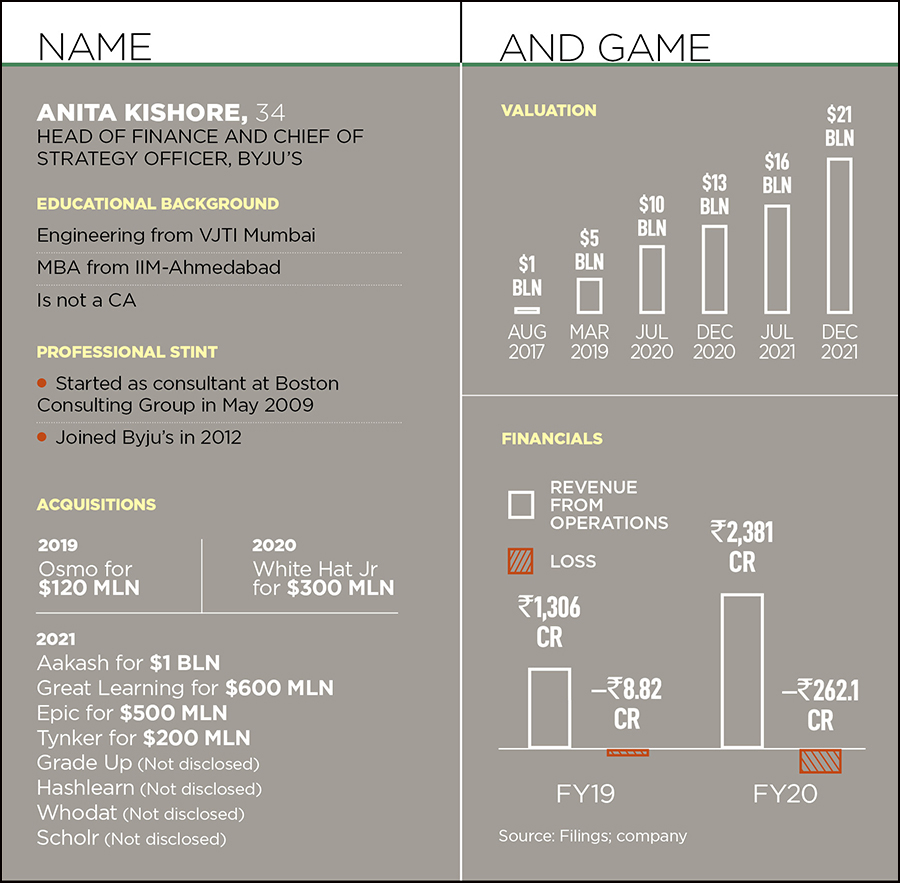 Kishore, though, was fearless. “The biggest risk you are taking is not taking enough risks,” she says. “If you do so, you’re leaving the opportunity on the table.” A finance person, Kishore says, must never look at the current numbers of the business. The focus must be what all an asset can bring to the table in the future. The maths teacher also dipped into the law of probability, but in her unique way. “Probability plays a role, but it should not dictate the decision,” she says. If one has succeeded at everything that one has done, Kishore underlines, then it simply means that one has not tried enough number of things.
Byju’s did try, and bought Osmo for $120 million in January 2019, its biggest buy till then.
Three years later, the gambit seems to have paid off. Osmo has grown four times and closed FY21 with a revenue of over $100 million. Kishore explains the secret sauce. In every decision, the strategic synergy of asset, the overall vision of the business, and where it fits in the larger scheme of the acquirer needs to be factored in while calculating the value. “The decision for us in any capital allocation is build versus buy,” she says.
For India’s biggest edtech player—which has swelled its buyout basket by acquiring over two dozen companies by reportedly shelling out close to $2.6 billion—Kishore has been framing strategies, planning finance, raising loads of capital, and cracking the ‘build versus buy’ puzzle. For a company that is valued at $21 billion and is reportedly in talks for a likely US listing via SPAC this year, the finance head has made judicious allocation of capital.
The crux of the capital allocation boils down to build versus buy. And to make a call, the new-age finance bosses are relentlessly pragmatic and aggressive. If the DNA of CFOs has changed, Kishore reckons a lot has to do with the context. It’s all about high-growth companies versus traditional organisations, which are more steady and grow at a modest pace. At such places, the job of the finance head is to ensure that nothing gets missed out. “It’s more like an umpire who ensures that everybody’s following the rules,” she adds.
Now contrast it with a high-growth company, which is scaling furiously. The rules, perspective and lens change. “Every decision is in the context of long term,” says Kishore.
The ‘build versus buy’ too is evaluated from a different angle. And emotions have zero role to play. Let’s talk about an ideal situation. If a company has a CPO (chief product officer) and a CTO (chief technology officer), then it’s their job to build a similar product from scratch. “After all, they have the conviction and ability to build,” she says.
Kishore, however, has a different lens. It’s never about taking into account ‘X dollars’ to buy and ‘Y dollars’ to build. It’s about the time saved, the synergies added, the new team that comes on board and the dynamism of the founding members. “All play a big role in what an investment will achieve,” she says, batting for a unified role for strategy and finance. “Actually one person looking at both these things is an ideal construct,” she says, dishing her reasons. First, a lot of financial decisions are related to what the strategic objectives are. “And for a lot of these decisions, there isn’t one right answer.”
Venture capitalists reckon that CFOs—irrespective of the different forms of nomenclatures across companies—are much more than custodians of financials and financial processes.

The CFO now plays a more generalist role in executing mechanised fundraising playbooks in conjunction with the CEO, says Shubhankar Bhattacharya, general partner at Foundamental. “Therefore they share some of the requirements and expectations that were previously set for the CEO.”
Kishore, for her part, is crystal clear about the expectations that the maths teacher has from herself. “Look for probability, but never let it dictate your decision,” she says.

Tweets by @forbesindia
Google plans privacy changes, but promises to not be disruptive
Solving problems before they start