How four ex-Flipsters built Groww into a unicorn

The online investment platform flipped traditional investment logic and scaled at a staggering pace in four years. Can it keep growing? 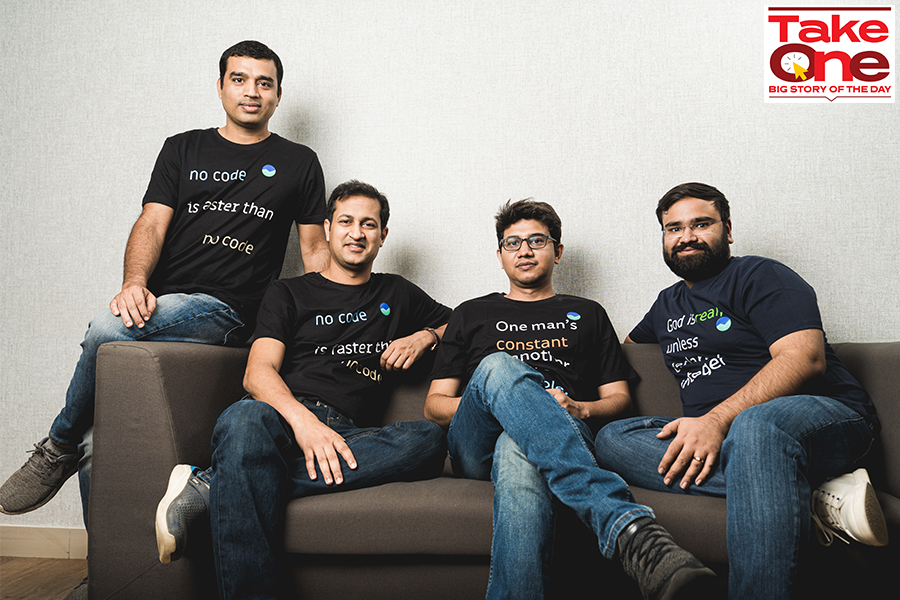 In 2016, when Sonia Chauhan was exploring investment options in mutual funds, the young fashion designer got intrigued by two things. First, companies were bombarding the viewers with all kinds of MF commercials on the television. Second, the ‘disclaimer voice’ towards the end of advertisements suddenly switched gears to supersonic speed: Mutual fund investments are subject to market risks. Please read all scheme-related documents carefully. “I could never figure out whatever jumbo mumbo they puked in the end,” she laughs. One word, though, stood out clearly: ‘Risk’. “I couldn’t understand and stayed away initially,” says the 27-year-old from Bengaluru. “I thought it’s risky.”A year later, in May 2017, Lalit Keshre very well knew the risk involved. He, along with his three friends from Flipkart—Harsh Jain, Neeraj Singh and Ishan Bansal—rolled out Groww, a direct mutual fund distribution platform. The four Flipsters—former Flipkart executives—were trying to take a stab at simplifying the process of buying financial products in India, which was largely slow, complex and opaque.

The biggest risk, though, still remained: Subdued consumer appetite. Less than 3 percent of population invests in equities in a country which has an estimated investible income population of over 200 million. What was also hampering efforts in getting people to come online to buy MFs was a lack of credible option. Keshre explains: While the intent to shift from traditional assets to financial assets was strong, there wasn’t a single platform that ticked all the right boxes. The risk, and the fear, was inhibiting people from taking the investment plunge.  The IIT Bombay alumnus knew a bit about the risk factor, and how to flip it into an opportunity. Keshre, who folded his first edtech venture Eduflix in mid-2013 after running it for close to two-and-a-half years as it failed to scale fast enough, positioned Groww as an online platform that made investment easy, fast and transparent for the DIY (do it yourself) generation. The Flipkart experience, too, came handy in designing the product and experience. “We had seen how technology and high-customer centricity disrupted the e-commerce industry,” he recalls, adding that such levers were missing in the investing space. There are only an estimated 25 million people in India who invest in stocks or mutual funds. The only way to add more, he underlines, is by making investing simple. “This is exactly what Groww does,” says Keshre.  The move seems to have paid off. Groww has galloped at a staggering pace on two fronts. First is the speed and amount of funding. While the undisclosed seed round happened in January 2018 and was led by CureFit founders Mukesh Bansal and Ankit Nagori along with Y Combinator, the next one—pre Series A of $1.1 million—happened in six months. Next year again, there were two quick rounds. Series A of $6.2 million in January 2019, and Series B of $21.4 million in September. The pandemic year—2020—saw just one round of $30 million in September, and then came the unicorn round in April this year. An $83 million Series D round led by Tiger Global pole-vaulted Groww into the unicorn stable. 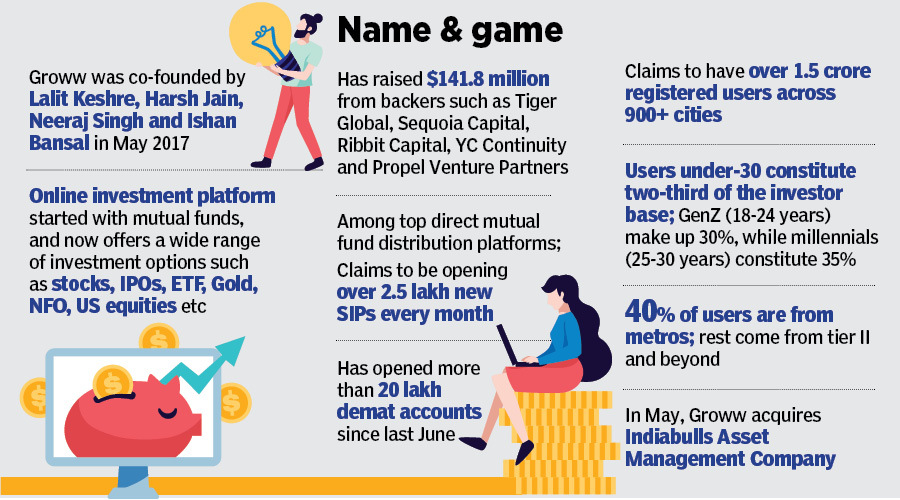 What started as a platform for mutual funds in 2017 has now morphed into an online investment platform offering a wide range of investment options such as stocks, IPOs, ETF, Gold, NFO, futures and options, fixed deposits and US equities. What has also grown at a lightning speed is the user base. Groww has over 1.5 crore registered users across 900 cities, claims Keshre. The fintech startup offers zero-commission investing in direct mutual funds and claims to have one of the lowest brokerage charges for stock investing. The startup, Keshre adds, has just started to grow. “We are firmly focussed on our mission to democratise investing in India,” he underlines.  Backers, meanwhile, are bullish about the growth prospects of Groww. A lot has to do with the massive headroom for growth that the country offers. 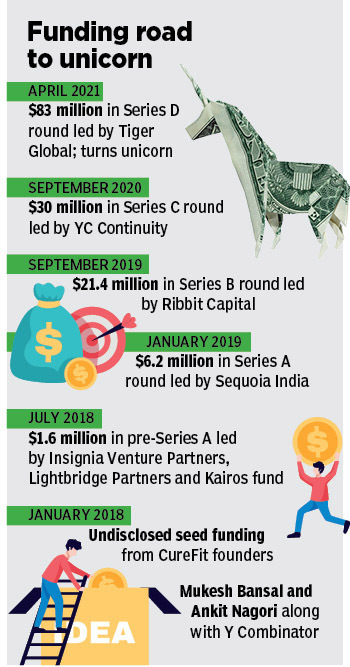 Ashish Agrawal, managing director at Sequoia India, explains the reasons. First, Indians save about 30 percent of their disposable income, with annual savings totaling over $450 billion, he wrote in a blog after leading the Series A round of investment in Groww in January 2019. Much of the savings, he says, has been invested in physical assets such as real estate or gold, in low-yielding bank fixed deposits or, even worse, sits as cash, where savings are eaten away by deflation.  While financial markets globally have offered the most efficient way for middle class investors to compound their savings over the decades, in India, retail investors shied away in the past. “Retail investor participation in Indian equities is less than 3 percent today,” he underlined. Compare this with US (around 55 percent) and China (around 7 percent). “The founding team’s product DNA and laser-like focus on serving the millennial investor stood out for us,” he mentioned, justifying the move to back Groww.  What has also helped Groww hit a high-growth trajectory is the financial rise of the middle class. “The growth in size and earnings of the middle class has created a larger investor base,” says Agrawal, adding the attractiveness of the traditional asset classes has declined. Add to this the efforts made by Sebi in driving growth of new investors and reduce commissions and expense ratios for investment products, and you get more growth tailwinds. “As a consequence, mutual fund SIPs (systematic investment plans) have replaced fixed deposits as the preferred investment for first-time investors. Back in 2019, only 18 percent of Indian publicly traded companies were owned by retail investors. The comparative numbers for the US and China were at 40 percent and 75 percent, respectively. “Efficient 'pipes', such as the one Groww is building, will help channel household savings into a wider suite of asset classes,” he contended.  Analysts are not surprised with Groww’s pace of growth. One big reason, they reckon, is the way the startup disrupted the segment. Most of the investment platforms were either too expensive because of high commission or were offline agent-driven models. Even the ones with some online presence had clunky user interface, which was not suited for smartphone generation. Groww plugged the gap.

“Groww has grown at an astonishing pace,” says Shivathilak Tallam, senior investment associate at Unitus Ventures. Scaling from offering services over WhatsApp to becoming a unicorn, the startup has jumped up the ladder by providing access to zero commission mutual funds, tapping a large and underserved middle income segment. The young, working-class segment needs access to savings and could not afford investing in real estate or do not see the returns as adequate. Groww, Tallam stresses, has enabled access to the common investible financial products under one roof for the Indian retail investor. “It has done a fantastic job of getting this large user base of young people who will be the next generation of wealth creators,” he says. Groww, though, has just scratched the surface. The headroom for growth is massive. Still a tiny fraction buys MFs and equities online. According to estimates, 95 percent of Indian wealth is in physical assets and a lot of it will move to financial assets in the future. This means a stronger demand for equity. As every economy evolves, savings move from physical assets to financial assets. “This is now happening in India as well,” Tallam explains. Groww, he points out, has built a large user base, especially from tier II and beyond, and now the challenge would be to see how well it can monetize the user base by catering to all their financial needs.  Back in Bengaluru, Keshre has hit the growth highway and is driving at a furious pace. In May this year, the unicorn bought the mutual funds’ business of Indiabulls Housing Finance—Indiabulls Asset Management Company—for Rs 175 crore.  What next? For Keshre, the biggest challenge is to grow responsibly and keep creating value for all stakeholders. “As we keep growing bigger, the responsibility keeps growing bigger and bigger,” he says. The unicorn tag, he adds, doesn’t excite him. “Nothing much has changed. We are still working the way we used to before becoming a unicorn,” he smiles.

What, though, is changing in India is the birth of a new set of unicorn founders with more risk appetite. Such startups are buying much older and established players. Take, for instance, Byju’s buying Aakash, PharmEasy acquiring Thyrocare or Groww snapping up mutual funds’ business of Indiabulls. “Most of them who became unicorns in 2021 have done so much faster than the ones that came before them,” says GV Ravishankar, managing director at Sequoia India. Though a buoyant market with surplus cash has also played a role, he underlines that markets decide valuations. “In a buoyant market, more companies will benefit from rich valuations,” he says. Though he is quick to add a rider. Companies, he says, don't become unicorns without exhibiting leadership in their segment or through scale or growth.

The new unicorn founders are more ambitious and are supported by more capital to build enduring companies. While conceding that some companies will fail in their journey, the VC maintains entrepreneurship is inherently risky. “But without that risk, there will be no greatness either,” he says.    Groww’s success in the long run will depend on how smartly it keeps flipping risks into opportunities, and charts a sustainable growth plan. The most crucial thing to remember is the risks involved. Keshre contends he knows his cards. “When one invests in stock, one needs to be aware about the risks involved,” he flashes a growwing smile.

Tweets by @forbesindia
Sony rallies big-screen hopes with 'Spider-Man' and 'Ghostbusters' at CinemaCon
India Vs US: Different impacts and outcomes of the mediatization of public health outbreaks