How Mindtickle wooed customers and investors to turn unicorn

After five years of 'selling petrol to cyclists' in India, Mindtickle pivoted in 2015 to target 'bike riders' in the US. Six years later, the sales-readiness Saas platform has turned unicorn 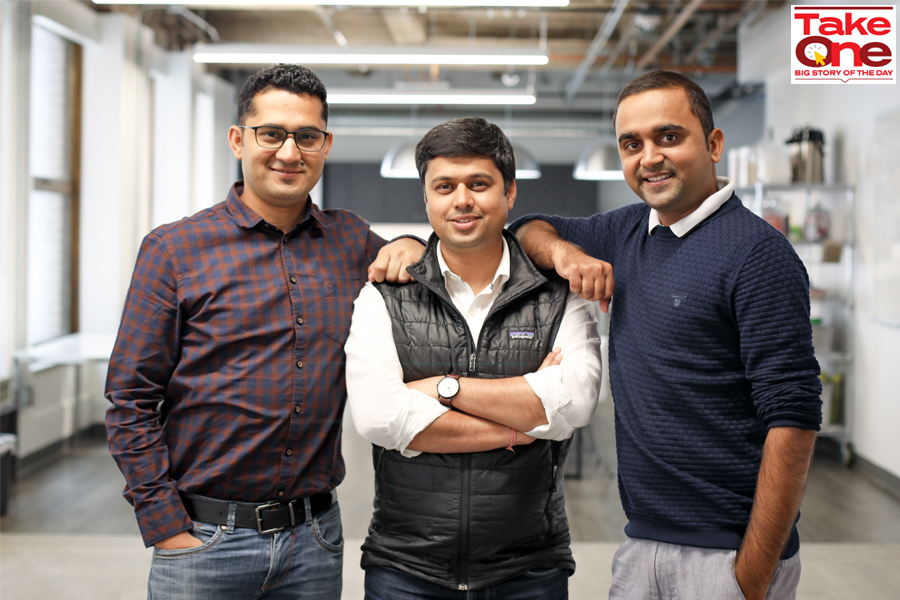 A decade back, four engineers started a virtual treasure hunt for fun. In fact, it was more of a part-time hobby for Krishna Depura, Deepak Diwakar, Nishant Mungali and Mohit Garg. The idea was not only to do something interesting, which could be at the intersection of fun and learning, but also transform the boring life of corporates. Tickled with the tantalising prospects of making a business out of their passion, the grads went to a bunch of investors in 2011, pitched them the idea of Mindtickle, and positioned the startup as a sort of gamification platform for corporates. “We thought we had figured out the sweet spot for the B2B product,” recalls Depura.

The four co-founders did find bounty quite early on their trail. Mindtickle managed to grab the attention of marquee venture capitalist (VC) fund Accel, which led a seed investment round in 2012. Then came companies like Yahoo and InMobi, which backed the gamification gambit and started doing employee on-boarding using Mindtickle. The corporate life was getting spiced up. Like players in treasure hunts, employees would get points, learn more about the company, and then move on to the next level. 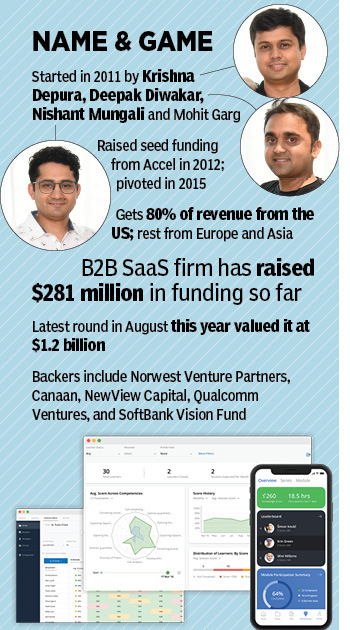 Over the next five years, though, business kept trickling in, and the B2B startup failed to grab the mindshare of investors. The Mindtickle gang, and the treasure hunt, was running out of steam. And nobody had any clue why. “Everybody was cheering us from the ringside. But nobody was willing to take a bet on us,” rues Depura, alluding to the reluctance of VCs to back the venture. Every knock on the funders’ door was met with a polite snub: Come after six months. “They wanted more data, more customers,” he recounts. Though the co-founders didn’t go ‘wrong’ in their approach, what they couldn’t figure out was the elusive ‘right’ that was needed to excite the guys who needed to write the cheque. Then came the ‘aha’ moment in 2015. Depura figured out what was going horribly wrong. “We were trying to sell petrol to people riding cycles,” he laughs, explaining what was missing in their approach. Mindtickle, he lets on, had the hammer—gamification—but the startup was wooing people who really did not need the product. The market, Depura figured out, was not in India. There was another thing that the co-founders discovered. The product, to begin with, was about employee engagement, and companies were not averse to trying it. “But it was vitamin for them. It was not a pain killer,” he says. 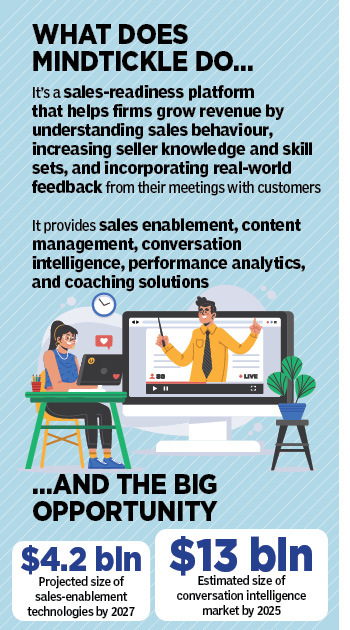 The pain was in the US market, and the diagnosis was done by data analysis. “We realised that a lot of companies in the US were using it to on-board more sales people,” says Depura. The Mindtickle team then went to LinkedIn to figure out if there was a buzz around training needs for sales executives. Bingo! The team had found the right clue. Companies were hunting for tools and technology to upgrade their sales army. Mindtickle realised that their product suited the US market. They quickly pivoted to a sales-readiness platform, focussed sharply on solving the pain points of business leaders who were looking for sharper and ready sales staff for their fast-growing businesses, and went to Silicon Valley. “Now we geared up to sell petrol to those with bikes, and they wanted high speed,” Depura smiles. The result was instant. Within six months of launching in the US, the startup managed to get a bunch of US companies. Suddenly, from being nobody, Mindtickle became the talk of the town, and the topic of discussion in boardrooms. For any sales pain, Mindtickle was fast turning out to be an effective pain killer. What came along with a steady and heady jump in users was a new set of cheerleaders. And this time they were not just mute spectators. They joined the show. In November, Mindtickle raised $12.5 million in its series A round of funding. Six years back, Depura underlines, the amount looked big. “We got our first validation in the US, not in India,” he adds. What series A also brought in its wake was a tsunami of new customers. Interestingly, most of them came through referrals and word of mouth. From closing deals less than $10,000, to bagging ones worth $100,000, Mindtickle started getting multi-million dollar deals with single customers. “People understood the value we were bringing,” Depura underlines. For Mindtickle, now there was no looking back.

The American treasure hunt gathered momentum. In 2017, Mindtickle raised $27 million. Two years later, came $40 million in a series C round. Next to follow was a hefty cheque of $100 million from SoftBank Vision Fund in November 2020, which made Mindtickle SoftBank’s first software-as-a-service (Saas) investment in India. Nine months later, SoftBank Vision Fund pumped in another $100 million, which valued Mindtickle at $1.2 billion—a unicorn. The startup now claims to have over 250 customers, and gets 80 percent of its revenue from the US, with the rest coming from Europe and Asia. “We are a truly global company,” Depura asserts, declining to share revenue details. What he does share though is a peep into the business strategy of charting aggressive growth. “We are not profitable. But that’s by design,” he says. Back home, in India, the pandemic is silently redesigning the way companies look at Mindtickle. “Now you don’t need to build technology. You can buy it, you can subscribe to it,” Depura adds. “Looks like we are in a different era,” he says. “There are unicorns all around,” he smiles.

The backers are delighted with Mindtickle’s success. “We continue to be impressed by Mindtickle’s performance in creating and becoming a category leader in the sales readiness space,” says Munish Varma, managing partner at SoftBank Investment Advisers. The product, he adds, has become an essential part of any sales organisation. Sumer Juneja, partner at SoftBank Investment Advisers, too gives full marks to Depura and his team. Since the last funding round in 2020, Mindtickle has consistently delivered ahead of plan across all metrics. Mindtickle, he lets on, has managed to add more customers, expand contracts, roll out new products and get wider acceptance. “We are delighted to be increasing our exposure to Mindtickle,” he adds. Interestingly, the biggest backer of Mindtickle once shied away from investing in the startup headquartered out of Pune and San Francisco. Depura still vividly remembers the chronology of events that played out a few years ago. Back in 2013, he recalls, Softbank was more known for its B2C bets. “This is what the wide perception was,” he recounts, adding that he happened to bump into a few employees from SoftBank at an investor summit organised by Accel. The co-founder had a good discussion and the business model was liked by the SoftBank executives, but there was a glitch. “We only write large cheques,” is what Depura was told by one of the funders, underlining the investment philosophy of the Japanese conglomerate. 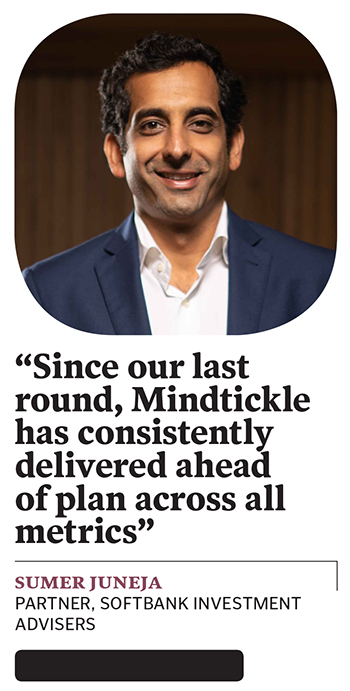 The entrepreneur was not amused. Reason: Saas companies usually don’t need big money. “We never thought that we will ever take money from them,” he recalls. Though both the parties stayed in touch and exchanged emails, Depura knew that the founder and funder were not on the same wavelength. Nothing moved ahead till April 2020. After being hounded for over eight months by Juneja and his team for a meeting, Depura reluctantly agreed to a 30-minute call. He, though, bluntly set the context: Mindtickle didn’t need investment. “We don’t need money,” Depura spoke his mind on the call. Juneja, though, didn’t relent. He managed to get another call, and introduced Depura to the senior leadership team at SoftBank. A few months later, Depura got onto a Zoom call with the Softbank CEO on one of the weekdays. The meeting started at 4 in the morning. Masa—that’s how Masayoshi Son is addressed in the tech world—stumped the Indian entrepreneur with a searing question. “Whatever you want to achieve in five years, why can’t you do that in one year?” he asked. Depura was dazzled. The conversation reinforced, and validated, whatever he and his team at Mindtickle had been doing since 2015: Dreaming big. “We had a dream. Things can happen, and we made it happen,” says Depura, adding that it’s still early days for the startup. “Now the market is defined by the way we define it. We just need to execute and capture it,” he says.Back in 2012, Accel backed the dream of four engineers who dared to thnk differently. “When we spoke to the Mindtickle team, what delighted us was that they were willing to think out of the box,” recalls Dinesh Katiyar, partner at Accel India based out of Silicon Valley. Early stage investors, he explains, can't get too hung up on the very specifics of the business plan. The entrepreneurs were excited about the new landscape, and were trying to take an initial stab at how to create value on that landscape. “And very often, you might be wrong about your initial stab,” he says. Mindtickle did pivot in 2015. Katiyar calls it a part of the learning experience. The team, he points out, realised two things. First, only gamification won’t be enough. Second, broad learning—because that could end up getting caught in HR departments—was a bit slower. “You can’t learn these things by doing research on the web,” he says, adding that the team was smart enough to make a course correction.Meanwhile in Pune, Depura and his team are still waiting for a long-pending course correction, though of a different kind. SoftBank, he stresses, has made two big investments in the startup, but Depura is yet to meet his backers. “Pune is hardly 3 hours from Mumbai. Right? All you need is just one trip,” he smiles. Well, it definitely makes sense to meet the ‘treasured’ unicorn, and SoftBank has enough petrol to do that. Can it get tickled?

Tweets by @forbesindia
Tradewinds blowing strong for India but seas could be choppy
Discovering Slovenia's underground labyrinths, one cave at a time