Migrant workers walked thousands of kilometers to villages after losing their livelihood in big cities. Many of them are slowly returning to work in the metros once again while the Covid-19 threat looms large 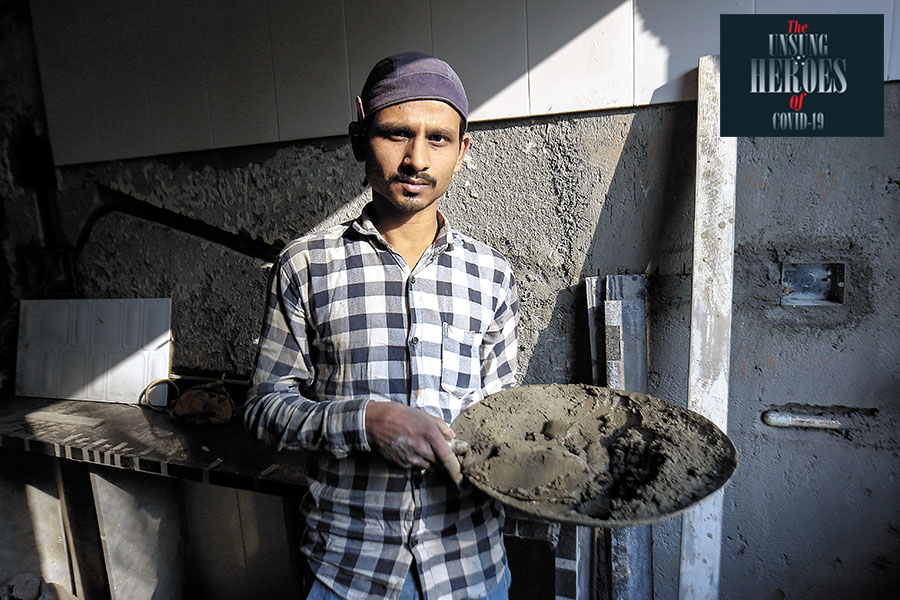 Shivshankar Pashwan walked about 2,000 kilometres to get home to Bihar from Mumbai in May. He returned to the city in September
Image: Emmanual Yogini for Forbes India


Shivshankar Pashwan was one of the many migrant workers who lost his job at a construction site when a nationwide lockdown was announced in March 2020. He initially stayed put in Mumbai but soon ran out of money and rations, and there was no one around to help him. He was also unable to find a seat on the Shramik special trains, which started on May 1 to ferry stranded migrant workers home.

With no other option in sight, on May 4, packing with him a small bag of essentials, the 37-year-old set out to walk 2,000-odd kilometres to reach his home in Darbhanga district of Bihar. Pashwan, who walked with 25 other workers, says he decided to do this despite the fear of contracting the virus because he felt he would “die of hunger” if he continued staying in Mumbai. He had no option but to leave the city that had helped him earn a living for 10 years.

A report by Stranded Workers Action Network (SWAN), published in April, found that 79 percent of workers returning were daily wage factory or construction workers while another 8 percent were domestic workers and drivers. About 72 percent of those returning home had almost run out of rations, usually provided by the local state government, and cash. Many said they did not receive salaries for March, nor cash handouts from states.

“We started from Andheri and after we reached the Maharashtra-Gujarat border, the cops didn’t allow us to go. There were many others like us who weren’t allowed to move. Our group figured out a different route through jungles and we continued our journey,” recalls Pashwan. After reaching Nashik, the group managed to convince a truck driver to give them a lift, which dropped them off somewhere in Madhya Pradesh. The constant walking left Pashwan’s legs swollen and feet blistered. Thankfully, community-run relief camps on the way offered food and medical assistance.

Between March 25 and May 31, more than 1,400 road accidents killed 750 people, including 198 migrant workers, according to the SaveLIFE Foundation, a charity that works towards improving road safety and emergency care in India. These migrant workers lost their lives while walking and cycling in intense heat, and travelling in trucks.

After walking day and night, enduring physical pain and mental stress, Pashwan reached his village after 15 long days. “When we were about to reach our village, people from nearby villages tried to block our way. They started hitting us with pebbles and asked us to go back. They kept saying that we have carried the virus from the city and because of us they will also get affected. We couldn’t go home, and spent 14 days in quarantine in a school near our village,” says Pashwan, who met his family 30 days after he first decided to go back home. 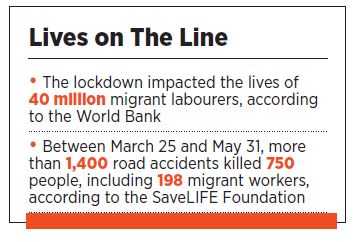 “I didn’t get paid for the work I did before the lockdown. Till date I have been following up with that contractor but he doesn’t respond,” laments Pashwan. Despite having felt alienated in the city during the lockdown, Pashwan chose to return to Mumbai in September.

“I got to know from my friends that work had gradually started and contractors were offering work so I decided to return. I was sitting idle for so many months and couldn’t have continued that way because of the huge debts on my family,” adds Pashwan, referring to the ₹1 lakh loan he had taken for his sister’s wedding earlier in 2020. Initially, he struggled to get work after returning to Mumbai but now things are “back to normal” for him.

Considered to be the backbone of India’s urban economy, migrant workers suffered the most during the pandemic. According to a World Bank report, the lockdown impacted the lives of 40 million migrant labourers. More than 50,000-60,000 migrant workers moved back to their villages within a few days of the lockdown.

Like Pashwan, another migrant worker who left Mumbai in early May was Harish Kumar, who, along with a friend, decided to ride his two-wheeler to his village Khetri in Rajasthan. “I knew surviving in the city would’ve have been difficult, so when the lockdown was announced I immediately started planning to return to my hometown,” says Kumar who reached his village in three days after covering a distance of 1,300 kilometres.

The journey was full of obstacles. Kumar ran out of petrol and had to drag his two-wheeler in the scorching heat. No one was willing to help. Somehow he and his friend managed to reach home. “I have been working in Mumbai since 1992, but when I needed help after the lockdown was announced, nobody came forward,” recollects Kumar.

“My family is dependent on me. In 2018, my 24-year-old son met with a car accident and the injuries left him disabled forever. A lot of money goes for his medications,” he adds.

Kumar, who worked as a construction worker in Mumbai, tried looking for jobs around his village in Rajasthan, but couldn’t find anything. He didn’t want to but eventually returned to the city in November to make ends meet.

Tweets by @forbesindia
Whatsapp, Telegram, Signal: Which one is more secure?
How Parler, a chosen app of Trump fans, became a test of free speech