Lightspeed: The fund that bets on getting in early

Lightspeed, which did not have an India fund until 2015, now counts multiple Indian unicorns in its portfolio 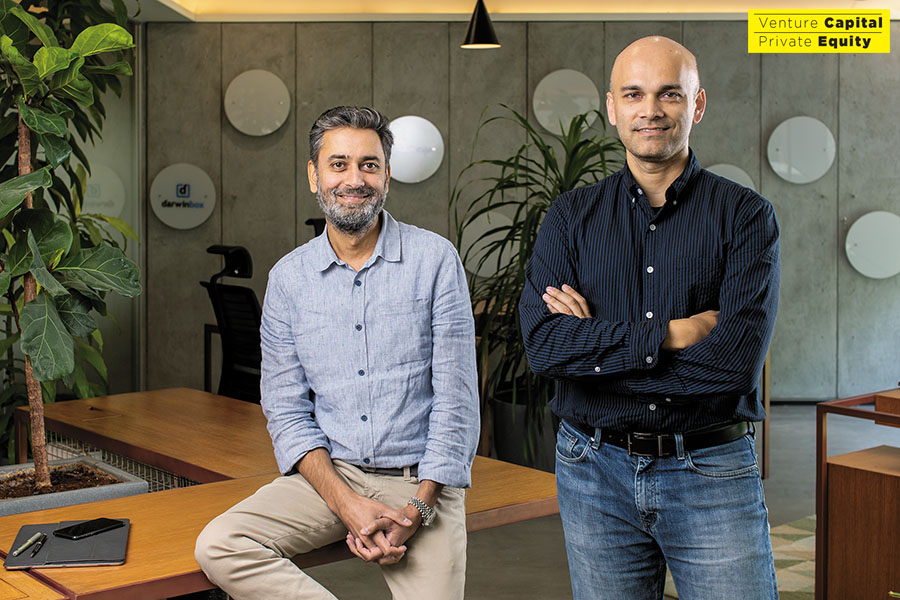 When Lightspeed India Partners set up its first India fund, worth $135 million (₹926 crore), in 2015, it had already had a taste of the potential of Indian startups. Beginning with a $7 million (₹48 crore) investment in online tutorial Tutorvista in 2006, the US-based Lightspeed Venture Partners had zeroed in on future unicorn Oyo in 2013. Within a year of being set up, the India fund pocketed two more future unicorns, Udaan and Byju’s.

For a venture capital firm that started its India fund only four years ago, this early-stage investor now stands out for backing companies that have become some of India’s most valuable startups. It even raised a second India fund worth $175 million (₹1,200 crore) in 2018, and has 30 startups in its portfolio by now.

Through the volatility of the markets, Lightspeed maintains its investments by “developing a thesis and conviction” in each of them, says Bejul Somaia, the firm’s senior most partner in India. It then finds high-quality entrepreneurs who “square off” with those theses and who have read the market in the same way.

“Oyo is a classic example of that,” says Somaia, who had been involved with online travel as a principal at US-based firm General Catalyst Partners, before joining Lightspeed India as managing director in 2009. He understood that profits in the travel industry lay in hotels, and that when the internet is adopted by industries, the first categories to move online are commodities. This is because while buying flight tickets, music downloads and books, “you know the product that you are going to get”.

In the hotel segment, four- and five-star properties in India were already online but formed a very small part of the market. Whereas, the large segment that comprised economy-class and one-star hotels was not available online since people didn’t know what they were going to get. So there was a need to create a trusted brand. And that meant going beyond aggregation—away from the Silicon Valley mindset that spawned AirBnB—and standardising the supply of rooms, and creating predictability.

Oyo’s founder Ritesh Agarwal had first caught Lightspeed’s attention when he joined the 20 Under 20 Fellowship programme funded by billionaire entrepreneur Peter Thiel in 2013. When Somaia met Agarwal that year, the venture had just evolved from Oravel Stays, which was more like AirBnB, to two Oyo properties.

Somaia recalls: “I said to him, ‘Ritesh, I love your passion, but in India, I think you have to fix supply.’ He smiled and said, ‘let me tell you about Oyo’, and he had two properties at the time.” Those properties had 20 to 25 rooms, but Agarwal’s reading of what was needed in the industry squared off exactly with Somaia’s and “that’s where the connection happened”.

They spent another hour-and-a-half discussing it and “that’s when you realise that this entrepreneur has read the market. That’s where conviction comes from,” he says. “That conviction translates to how we are going to work with a company after we have invested in them,” says Dev Khare, a partner who joined Lightspeed India in 2011. “We know the important levers in the business, we discuss that with the entrepreneur and work with them to pull those levers.” 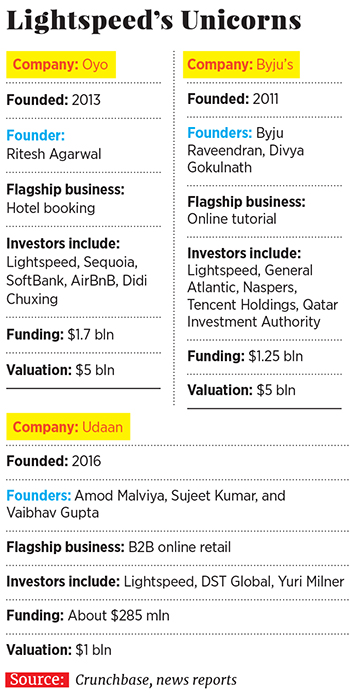 In Oyo’s case, Lightspeed helped with a lot of recruitment—including getting the COO and the CFO—and got involved even though it was a seed investment at that point. One Lightspeed principal, Maninder Gulati, who was instrumental in bringing Oyo to Somaia’s notice, eventually joined the startup as chief strategy officer in October 2015.

“Because of this conviction, it actually doesn’t matter what stage we go in at—whether it is a seed investment or series A or series B,” says Khare.

Somaia adds that an understanding of the space and the entrepreneur are important. “Building conviction has enabled us to invest in each of our companies. If you look at a lot of what we’ve done, we’ve gone in so early.”

For instance, Lightspeed was among the first to invest in Indian Energy Exchange (IEX), a power trading platform; it was also one of Lightspeed’s early investments in India. Today IEX is a public company. At OneAssist Consumer Solutions, a customer protection and insurance provider, Lightspeed “literally helped found the company”, says Somaia. It committed the money and helped founders Gagan Maini and Subrat Pani get started. For shopping portal Limeroad, it wrote founder Suchi Mukherjee the first cheque to help her move from the UK to India. When it wrote Agarwal a cheque for Oyo, he was 19 years old and had two properties to manage. It invested in Udaan when it was at a pre-product stage, and still building its technology, while at ShareChat, an Indian vernacular social media company, it invested in series A.

Most companies that Lightspeed has invested in are in categories that were not popular among investors. Referring to Oyo, Khare says, “In hindsight it’s obvious to everyone that lodging is a big space, but at that time [in 2014] nobody was doing it.”

When Lightspeed invested in ShareChat, everybody thought an India company couldn’t build a local social media company competing with Twitter and Facebook, says Khare; but there are local social media companies now and ShareChat is one of the leading ones. Lightspeed has invested in several India-facing software-as-a-service companies in the last couple of years, something that is still unpopular with investors, Khare says.

Lightspeed has been an early investor in categories that it prefers. These categories become mainstream over time, and their investees become category leaders.

“It’s amazing what talented entrepreneurs can do, and you can’t predict it,” says Somaia. That’s why their emphasis on people also becomes so important. In 2007-08, the prevailing perception about ecommerce in India was that it would not take off in India, that Indians wouldn’t buy online, that people didn’t trust online transactions and there was poor credit card penetration.

Along came Sachin Bansal and Binny Bansal, with Flipkart and cash-on-delivery payments. It became clear that Indians would do things similar to advanced economies, but with nuanced differences, Somaia adds.

When Lightspeed invested in OneAssist in 2012, the perception was that Indians won’t buy insurance, Somaia says. Today 1.5 million people have OneAssist plans. Similarly,  while investing in Udaan, convention indicated that small businesses would not make online purchases. Today, hundreds of thousands of them buy on Udaan’s app-based platform.

The Lightspeed partners believe that strong entrepreneurs can solve seemingly intractable problems. Somaia believes that just going out and meeting people is another way to find companies and opportunities, by getting to know people even before they’ve become entrepreneurs. “We want to get to know good entrepreneurs, people who are leaders in the ecosystem and, who knows, maybe it will lead to nothing but a friendship, and learning,” Somaia says. “But we found that it usually does lead to something.”

The Udaan investment happened this way, he recalls. He got to know founder Amod Malviya when he was CTO at Flipkart, and had impressed many in the ecosystem as a leader. “I thought I’d love to meet him and learn something from him. That turned into a friendship, which turned into an investment partnership,” he says.

The market has changed too, for the better, becoming broader and deeper, throwing up founders who are serial entrepreneurs and “just know what not to do,” says Khare.

Lightspeed is backing a new breed of entrepreneurs in India who are playing on the front foot to go out and win. That most of its partners have themselves been entrepreneurs previously helps them empathise with founders they invest in. Both Somaia and Khare—classmates at the Harvard Business School—co-founded their own companies in the US, which got acquired. They witnessed the dotcom boom and bust, the financial crisis from 2008, all the way to 2015-16 when there was a rush of investments in startups in India.

Krishnan Ganesh, founder of Tutorvista, recalls that he had met Ravi Mhatre, one of the founders of Lightspeed Venture Partners in the US, when he was visiting India. “What I really liked was that even though they hadn’t invested in us and we weren’t raising money [when they first met], Lightspeed’s partners were willing to spend time and share their experience and views on the US market,” which Ganesh was looking to target. “That was very proactive of them, and because of that, when we were raising series B, they were an automatic choice.” However, when Ganesh saw a large opportunity for his startup in India itself, he went to Lightspeed with the proposal. It would have been easy for any VC firm to try and dissuade the entrepreneur, because the original plan was for the US market.

“But they themselves had been entrepreneurs. And while they asked all the tough questions, they were willing to listen, to see the opportunity, to acknowledge that the idea had merit,” Ganesh says. “I’ve seen this again and again with them.”

Lightspeed India has had three good exits, Tutorvista being one of them. It invested $7 million (₹48 crore) in a series B round in it—with a post-money valuation of $35 million (₹233 crore)—and exited fully when Pearson acquired it by valuating the company at $213 million (₹1,460 crore) in 2011. Pearson sold Tutorvista to Byju’s in 2017.

The other two exits were Itzcash and IEX. Itzcash was acquired by US-based Ebix, valuating the payments firm at $150 million (₹1,028 crore). Lightspeed had invested ₹35 crore in 2010 in IEX, which went public in 2017 at a valuation of ₹5,000 crore. Lightspeed continues to hold a stake in it.

“Now they are unstoppable,” Ganesh says, with their dedicated India fund. Lightspeed India no longer has to worry about fund allocations in competition with the more advanced markets of US, China or Israel where Lightspeed operates.

This is one of the challenges that global funds have, because in India things take longer and ticket sizes are smaller. Now, Lightspeed has the best of both worlds, with the larger global fund able to invest at Series B or C, while the Indian fund focuses on early stage investments, Ganesh says.