Within a decade, Kanwaljeet Jawa has taken Daikin to a dominant position among India's air conditioner brands 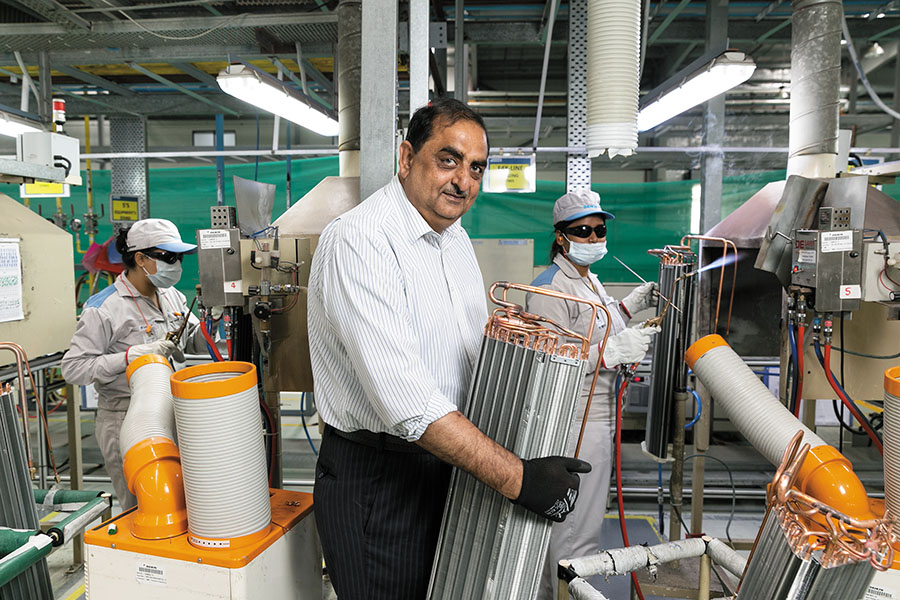 The meeting started over a cup of coffee,” says Kanwaljeet Jawa, vividly remembering the chain of events from 2009, when he informally met Toshio Nakano, the then general manager of Daikin Asia-Oceania, at a five-star hotel in Delhi. “The coffee then got stretched over to a mug of beer, and finally ended with a glass of wine at night.” Jawa, who was then managing director of Uniflair India, an Italian MNC specialising in precision air conditioning (AC), was not in the market for a job, and getting an offer from Daikin was the remotest thought in his mind.

Daikin was already the biggest air conditioning company, in terms of revenue, in Europe, China and Asia-Oceania. It had entered India in 2000 through a joint venture with Usha Shriram Group, but by 2009, the Japanese company was languishing at a distant No 7. In 2006, Jawa recalls, Daikin had announced that it aspired to become the biggest air conditioning company in the world.

Nakano, who Jawa credits with driving Daikin’s aggressive growth, next invited Jawa for a visit to the company’s factory in Thailand. The discussion, this time, revolved around how the Chinese, Americans and Koreans were working in India. “The dinner meeting turned out to be an interview,” says Jawa, who was impressed by the knowledge that the Japanese had accumulated about the Indian market and its rivals. In May 2010, Jawa joined Daikin as deputy managing director and COO.

As Jawa completes nine years at Daikin this May, the company has not only achieved its ambition of becoming the largest in the world, but has also pipped its Korean, American, Chinese and Indian rivals to become the biggest air conditioner company in India, residential and commercial markets combined, in terms of turnover. 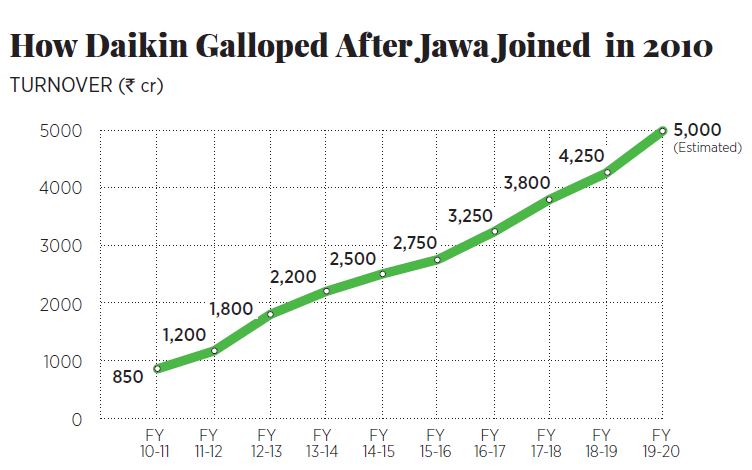 Nakano acknowledges the role played by Jawa. “Jawa has been the ‘change agent’ for Daikin India’s turnaround since 2010,” said the chairman of Daikin Industries Thailand and Daikin Air-conditioning India Pvt Ltd in a press release last year.

Daikin’s biggest product differentiation in its early years was its ability to stay quiet.

“Its silence turned out to be deafening,” says Abraham Koshy, professor of marketing at IIM-Ahmedabad, alluding to a Daikin TV commercial in 2006. In the ad, sculptures of three wise monkeys—each covering their eyes, mouth and ear respectively—are shown sitting on a ledge, next to a wall with an air conditioner. Suddenly, the third monkey takes his hands off its ear, looking with wonder at the silent air conditioner. A voiceover says: “Daikin air conditioner. Complete silence.” While every other AC brand in India was claiming its cooling power to be better than the rival’s, Daikin spoke about a different functionality. “ACs are supposed to cool. Then isn’t it stupid if brands are tomtoming their cooling prowess?” asks Koshy. 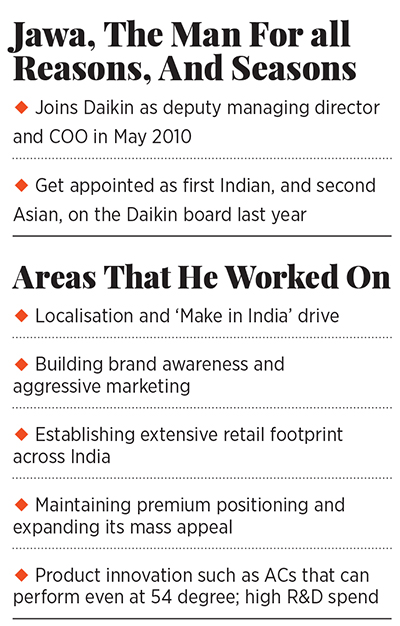 Jawa’s biggest contribution to Daikin’s growth in India, Koshy adds, has been the manner in which he has gone about his job. Smart marketing, a sharp focus on expanding its retail footprint, and investing in the country to set up production plants changed the game for the Japanese brand, which, in the early 2000s, trailed Samsung, LG and Voltas. “Slowly but steadily, he made the brand visible,” says Koshy.

Its premium positioning, however, brought its own set of challenges. Jawa recalls that the biggest impediment to growth was the perception of Daikin being an “exorbitantly pricey” brand. “We were expensive,” he concedes, “but not prohibitively expensive.” Although Daikin ACs were 40 percent more expensive than others, the brand was perceived to be almost 100 percent more expensive. “The average customer thought it was better to buy two LG ACs rather than one Daikin,” chuckles Jawa. This perception—Daikin still costs about 15 percent more than other brands—kept the brand confined to affluent customers, while limited distribution meant it couldn’t expand beyond Delhi, Mumbai and Chennai.

Jawa detected yet another problem. “It was too silent for too long,” he says, referring to the low level of brand awareness Daikin had created in India. “It needed to move from prominence to dominance. If you want to dominate, then you need to talk about yourself. You can’t be silent.”

Jawa’s plan, however, had an ominous beginning with Japan being struck by a devastating combination of an earthquake and a tsunami in March 2011, followed by floods in Thailand a few months later. “We airlifted 3,000 to 4,000 ACs from our Thailand manufacturing plant to India,” recalls Jawa, adding that the cost incurred then was more than the cost of the ACs. But dealers in India could not be left in the lurch during summer. “This helped build enormous trust among the dealers and channel partners,” says Jawa. 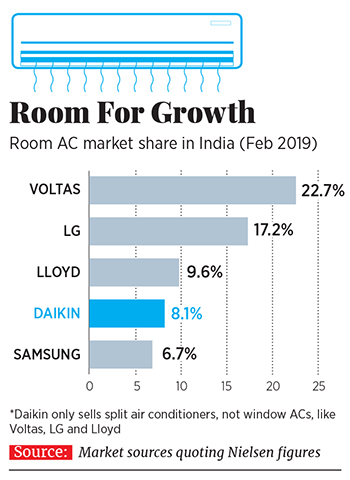 The crisis taught another crucial lesson: Daikin needed to speed up localisation. A second factory was set up at Neemrana, Rajasthan, in 2016—its first was set up in 2009 at Neemrana—along with an R&D centre; the company now uses 65 to 75 percent of locally manufactured components. It is looking to set up a third factory in southern India.

Over the next few years, Daikin turned its attention to marketing. “The focus still remained on high quality products,” says Jawa, while talking about a 2010 ad campaign that generated high brand recall. The high-decibel outdoor campaign, starting with a massive hoarding at DLF Square shopping mall in Gurugram, was rolled out. It said, “Daikin. With love from Japan.” The result was instant. From being perceived as air conditioners for commercial buildings, Daikin was perceived as a room AC.

A large part of the company’s success in India, Jawa contends, had to do with the autonomy granted to him. “The parent company remained honest to the core,” he says. By 2012, Daikin toppled South Korean giant Samsung from the third position. Breaking the dominance of the LG-Samsung combine was a massive morale booster. “We declared war. We wanted to dominate and win,” he recalls. In 2016, Daikin overtook LG at the second position.

What probably helped Jawa win the Indian market was the fact that, unlike Daikin, none of its rivals manufactured only air conditioners. With Voltas—India’s biggest player in the room AC segment—now selling fridges, washing machines and other home appliances in a joint venture with Turkey’s Arçelik, Daikin might find it easier to topple the Indian giant. “I have deep respect for them,” he says of the company where he had worked for five years. “But we will win the last frontier.”

The most satisfying moment for Jawa, though, was the compliment he got from Masanori Togawa, president, Daikin Industries. At a function to felicitate Jawa last year, Togawa remarked that he had believed that the slow and steady won the race; but “India taught us speed”.