By harnessing the power of video on its app and using machine learning to serve personalised content, news aggregator Dailyhunt plans to touch 200 million users in 2020 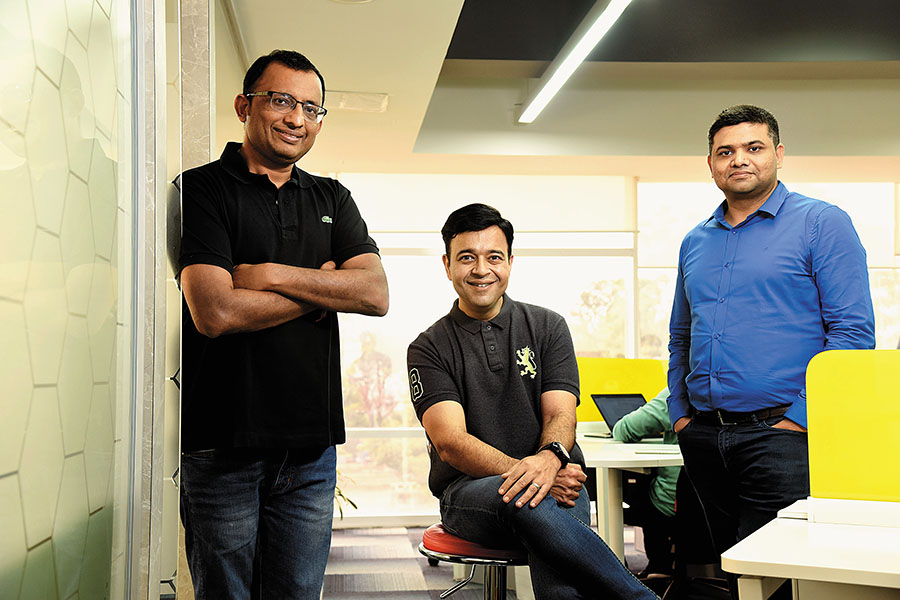 
When Umang Bedi left as Facebook India head in December 2017, he wanted to do something entrepreneurial. The one trend he was acutely aware of was that internet in India was pivoting from an English-focussed medium to an English-plus-vernacular-language medium. He joined vernacular digital media company Dailyhunt as president in January.

There were around 200 million monthly active users on the internet in India at the beginning of 2017 and almost all of them were English-content consumers. Over the last 20 months, the number has roughly doubled, says Bedi, with much of the growth coming from vernacular consumers, who stand at about 234 million. The figure for English content consumers is around 175 million, as per various industry estimates.

The internet is growing (in India) thanks to the “Jio effect”, he says. Reliance Jio Infocomm and other telcos brought down the price of data to affordable levels: A ₹150 monthly plan gives 1 GB of data per user per day. The internet user base is set to double again by 2022—to between 750 million and 800 million—as estimated by IMAI, KPMG and Google, says Bedi. The English content audience, however, will only grow to about 200 million and the remaining would be people speaking the local language.

“That is a massive opportunity to serve them with content for both information and entertainment,” Bedi points out. “We felt that Dailyhunt, which had switched to mobile and local languages five years ago, was in a good position to take advantage of this macro opportunity to create the largest Indian media entity in the digital space.” And video, in vernacular languages, matched to each user’s individual taste, is the way forward for the company’s next stage of growth.

Versé  Innovation—a telecom value-added-services provider started in 2007 by Virendra Gupta and Shailendra Sharma—saw the opportunity in vernacular a lot earlier compared to the others. In 2012, it acquired Newshunt—a news aggregator platform—as part of the acquisition of Eterno Infotech. It was renamed Dailyhunt in 2015. “Five years back, talking about local language was a sin… there were only 30 million users [overall],” says Gupta, who is Dailyhunt CEO. 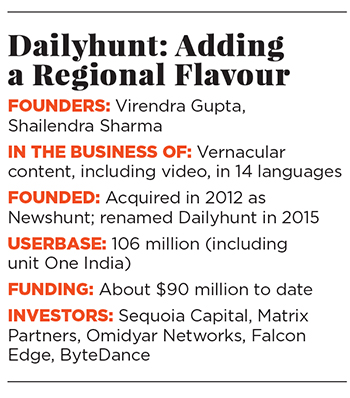 “When Jio came in, local language became sexy,” says Gupta. “This market will go through a huge explosion and we need to be in the big league, because competition is from Google and Facebook.” Presently Google and Facebook dominate the overall digital media landscape in the country with about 80 percent of the market, both in terms of share of time and advertiser wallet. They have between 225 million (for YouTube) and 250 million (for Facebook) monthly active users who spend more than 20 minutes individually on an average on each of these platforms. Dailyhunt’s ambition is to create the largest Indic language platform.

The game plan to achieve this is two-pronged. The first involves ramping up Dailyhunt as a local language Indian-digital-media platform by adding more users, and building up the infrastructure needed. Dailyhunt currently serves vernacular content from more than 1,500 partners in 13 Indian languages apart from English. The second is to develop deep familiarity with each user’s tastes, using machine learning, with a special focus on video.

“It’s a natural evolution. The audience is the same, but we are changing with the changing habits and preferences of that audience,” says Gupta, adding that with the explosion of data, video and multimedia consumption are becoming popular. “We are reinventing ourselves to be in line with this change, while retaining the core of our value proposition.”

In older versions of the app, “it was a stack of cards around news, from authentic sources”. Over the last 7-8 months, video has become the central experience and the main feed has a mix of multimedia content. “It’s like the entire package about India, and in vernacular,” says Bedi.

“At the heart, it’s a true multimedia feed, with local formats, large cards, visually immersive and video,” says Gupta. Starting this year, however, video has become central to the app experience.

This is also essential to making money. Dailyhunt’s main source of income is advertising, and video will help it double its revenue this fiscal compared to the previous one, Bedi says, because the cost-per-thousand-impressions (called CPM, with M standing for mile, Latin for thousand) is “two to three times” that of static display ads.

The reinvention also involves machine learning to better understand the consumer, and serve personalised content, says Sharma, who is CTO. Over the last 18 months, he has led the efforts to build features of personalisation and search.

“We’ve been focussed on personalisation, processing large amounts of data to build real-time user profiles, build their preferences. While recommendations on, say, Facebook might happen on the basis of a user’s social network, in Dailyhunt, they will happen on the basis of the content network, says Sharma. Everything a user does on the Dailyhunt site or app becomes a signal that the company tracks in real time, he adds.

For this, “we have deployed a lot of machine learning models, which categorise the content into various dimensions and features”, says Sharma.

There are 30 to 40 algorithms building out content graphs for each user who don’t even need a login. Over time, graphs are built on the basis of user interests, how they browse content, spend time on the app, click-through rates, likes, dislikes, shares and comments.

“We form a deep persona of who you are, the kind of content you like to engage with, the formats you want,” says Bedi. All these profiles comprise some 16 TB of what Sharma calls ‘User Stores’—each one consisting all the preferences of a given user.

“News is one aspect; there’s also local and hyper local news with more than 1,500 licensed partners and Dailyhunt’s publishing engine called One India which was acquired in 2016. We further work with thousands of professional content creators and contractors who supply local content. The content is automatically populated based on a user’s location,” says Bedi.

At the other end are algorithms that work to figure out how much time a user might spend on a particular piece of content. These are continuously being trained, helping Dailyhunt move from click-based predictions to machine-learning based ones.

“ The audience is the same, but we are changing with the changing habits and preferences of that audience.”
Virendra Gupta, CEO, DAilyhunt

Dailyhunt’s daily and monthly active users are spending an average of 25 minutes on the platform, which Bedi claims is higher than the corresponding figures for Google and Facebook. Between Dailyhunt and One India, there are 106 million monthly active users. “We are the largest Indian media platform,” claims Bedi.

“We’ve been privileged to be early partners at Dailyhunt and see them emerge as the largest local language platform,” Vikram Vaidyanathan, a managing director at early stage VC fund Matrix Partners, wrote in an email. “Dailyhunt’s focus on building a sophisticated content recommendation and personalisation engine is the key to having sticky engaged users. We are excited about their next big leap towards an immersive video-first platform.”

However, profitability is still at least a couple of years away, says Gupta. “We are investing in building new formats of content, new products and acquiring a lot of users. The Indian market is on a huge growth path, so you have to invest heavily in the product, infrastructure—video serving requires huge amount of infrastructure costs—and a great tech team for the type of personalisation that Dailyhunt wants to achieve.”

Dailyhunt is also building integrated experiences with new business models around distribution. For example, users opening the Dailyhunt app would recently see a tab on Comicstaan, a show on Amazon Prime Video in India. Clicking on it would take them to Comicstaan on Amazon Prime Video. “It was aimed at boosting viewership and subscriptions of Amazon’s Prime Video service. It was an immersive experience and nothing that compared with a conventional video ad,” says Bedi.

Distribution, whether it is Amazon or another partner, is a mechanism that will become increasingly popular and make money for Dailyhunt. In the case of the Comicstaan tab, Amazon paid a fee every time a Dailyhunt user clicked through to Comicstaan and Amazon Prime Video.

Dailyhunt has also built capability to target ads locally, making it an attractive proposition for small and medium businesses that might want to put out ads only within their cities or even a small set of localities. Dailyhunt can show ads based on postal PIN codes. Its founders are betting that they will be an attractive proposition to advertisers because of the growing reach they can provide to an audience that prefers the vernacular.

Another form of monetisation is an “app-in-app” experience. Dailyhunt is working with partners to have their apps show from within its own app, “so there is a whole distribution strategy: 98 percent of all buying in ecommerce today is happening from tier 2 and tier 3 and 4 cities and towns, where local language is the preferred format. Imagine an experience where you saw an ad for something and you could instantly place an order for it (within the Dailyhunt app itself)—that’s where we are headed”.

Other partners that Dailyhunt is working with include Flipkart, MakeMyTrip, Ibibo, Zomato and Limeroad. The rate at which Dailyhunt is growing makes it the fastest growing app in India by absolute numbers in any category, adding more than 12 million new monthly active users every month, says Bedi. “This is projected to increase to 20 million new monthly active users every month by the end of this year.”

Which means they expect to be “well over” the 200 million milestone over the next 18 months to two years. “Over the next two years, we would be as large, if not larger than the global players,” Bedi says.

Tweets by @forbesindia
The price of the (really) good life
Dabur vs Patanjali: Veda wars