V Resorts: Off the beaten track 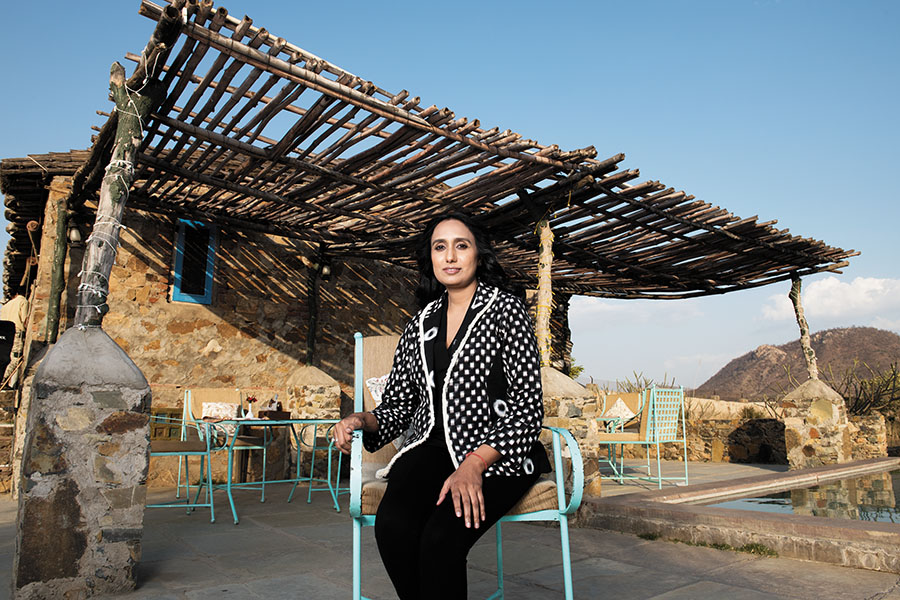 At times, it takes ages to understand the essence of a stanza. For Aditi Balbir, it took well over a decade to grasp the crux of the phrase ‘road less travelled’ in Robert Frost’s poem, ‘The Road not Taken’. Balbir, founder of offbeat resort management startup V Resorts, had her first tryst with Frost’s masterpiece when she was studying in class VIII at Delhi Public School, RK Puram. ‘Two roads diverged in a wood’, Balbir, vividly recalls the concluding lines. “And I took the one less travelled by, and that has made all the difference.” “What would a 14-year-old make out of it? Those were mere lines for me,” she reminisces.

Fast forward to Tehla village in Alwar, Rajasthan. Around 230 km from the national capital, Balbir is enjoying her evening tea at Utsav Camp, one of the properties managed by V Resorts. Utsav Camp is roughly 90 km from the main safari gate of Sariska National Park, around which a rash of hotels has mushroomed.

Utsav Camp, in contrast, is cut off from the cacophony of urban Sariska. Spread over 10 acres, the resort is an antithesis to what conventional hotels offer. The internet connectivity is intermittent, mobile network plays truant, there is no idiot box in the elevated tent house for guests, and the last few miles leading to the resort leave a dusty trail in the semi-arid area of Rajasthan. The panoramic scene of the hills from the elevated open space and the breathtaking view of a setting sun add to the tranquil charm of the place. The property stands true to the punchline of V Resorts: Get Lost.

Ensconced in a cushy blue chair next to the plunge pool, Balbir, now 40, sips a hot ginger masala tea. “I indeed took the road less travelled,” she grins.

With a meagre revenue of over ₹20 lakh after the first year, there were serious doubts about the business model of aggregation. In fact, after three years—which coincided with the boom of budget hotel aggregators like Oyo, Fabhotels and Treebo—the idea of offbeat locations looked out of place.

Balbir, the founder and CEO of V Resorts, persisted with the gambit of staying unconventional, although she pivoted the model from aggregation to full-stack management. The move paid off. From ₹1.5 crore in fiscal 2015, V Resorts’ revenue leapfrogged to ₹10 crore three years later. The startup is set to close fiscal 2019 at ₹30 crore, and has set a target of ₹100 crore for 2020. From just five properties across two states in 2015, V Resorts now has 170 properties in 21 states.

“Offbeat is the new heartbeat of travellers yearning for experiences,” says Balbir. From organising a lakeside high tea—just 2 km from the resort—to a bush dinner in the nearby wilderness of the jungles to village tour and birding expeditions, the experiential offerings at Sariska and other properties have helped the startup carve a niche in the cluttered travel space.

‘DIFFERENT’ IS THE NEW COOL
V Resorts’ encouraging start, reckon experts, is largely due to the quest of young as well as seasoned travellers for differentiated experiences. “Experiences are a defining factor for all travel, and in fact, overall happiness,” avers Amit Somani, managing partner at Prime Venture Partners, an early stage venture capital firm. Somani, who was the chief product officer at MakeMyTrip before joining Prime Venture Partners, contends that mass emergence of social sharing of photos and videos—from Facebook to Instagram and WhatsApp—is further accelerating the word-of-mouth for novel experiences. “It is no surprise that differentiated offerings and experiences are getting traction,” he says, adding that India has a lack of differentiated, experiential supply.

What’s also helped the unconventional travel firm grow is the emergence of millennial travellers opting for experiential holidays, rather than conventional hotels or places. A December 2018 study by travel portal Booking.com testified to this growing trend. Enriching experiences were at the core of travelling last year, and 2019 will see this trend getting more pronounced. Indians taking shorter but more frequent trips and picking unique experiences are also boosting the trend. “Three out of four travellers plan to take more weekend trips in 2019,” the study predicted. Curated travel itineraries squeezed into shorter time frames is seen as one of the big trends in 2019, it concluded.

Investors in the startup travel firm are also excited with the growth trajectory. V Resorts has almost 2,000 rooms under management, which is just 30 percent lower than Mahindra Holidays, with a much lower capital cost, claims Shailesh Vickram Singh, executive director at Seedfund, an early stage venture capital firm that invested in V Resorts in 2014. “V Resorts is seeing strong organic growth and we expect it to be a large and substantial player in the holiday space,” he says, adding that there is always money available for better business models with a large market.

FALSE START
In spite of a robust tailwind that V Resorts experiences now, the trek was not easy to begin with. Founded in 2011 as an aggregator of offbeat properties, V Resorts didn’t have the best of starts. The biggest stumbling block was the business model itself, which didn’t give any elbow room to have control over services, which were erratic and not standardised. 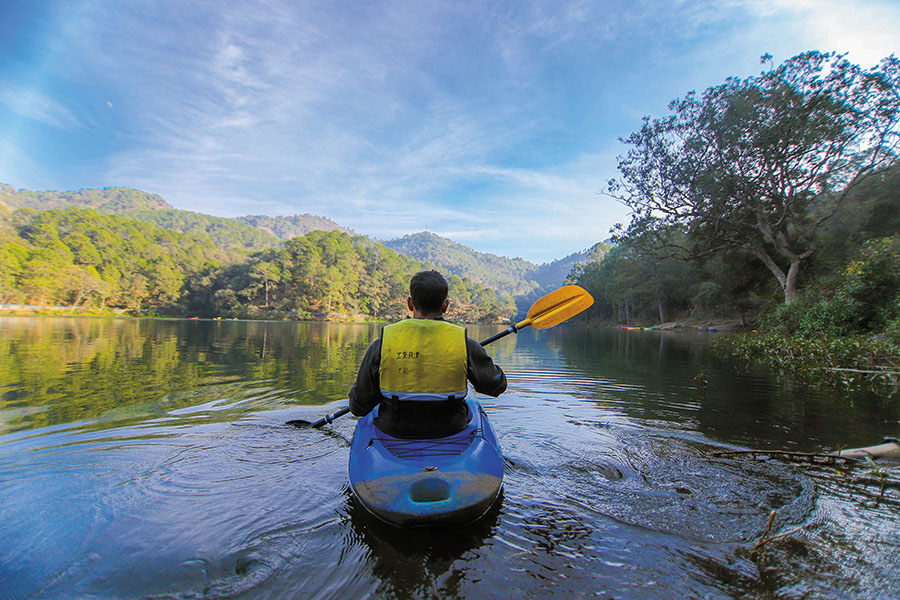 Sattal, a hill station near Nainital in Uttarakhand, has a water body that is a confluence of seven freshwater lakes

Word of mouth, which was largely instrumental in driving business in the first place, became a double-edge sword. Another issue was lack of infrastructure development, and convincing independent players with small chains to come on board. The results were disastrous. The footfalls started dwindling, business was hard to come by and V Resorts was getting lost in the wilderness.

By 2014, Balbir was thrown in at the deep end. A venture capitalist working at Bedrock Ventures, which incubated V Resorts in 2011, Balbir was given the mandate to start from scratch. She was given founder equity, was made CEO, and allowed to pivot the business model from aggregation to complete management. In her maiden innings as an entrepreneur, Balbir started her experiment from Sattal, a sleepy and unmapped hill station near Nainital in Uttarakhand. Reason: Though she was convinced with the model of offbeat properties, she wanted to prove to herself and stakeholders that it could be scaled. 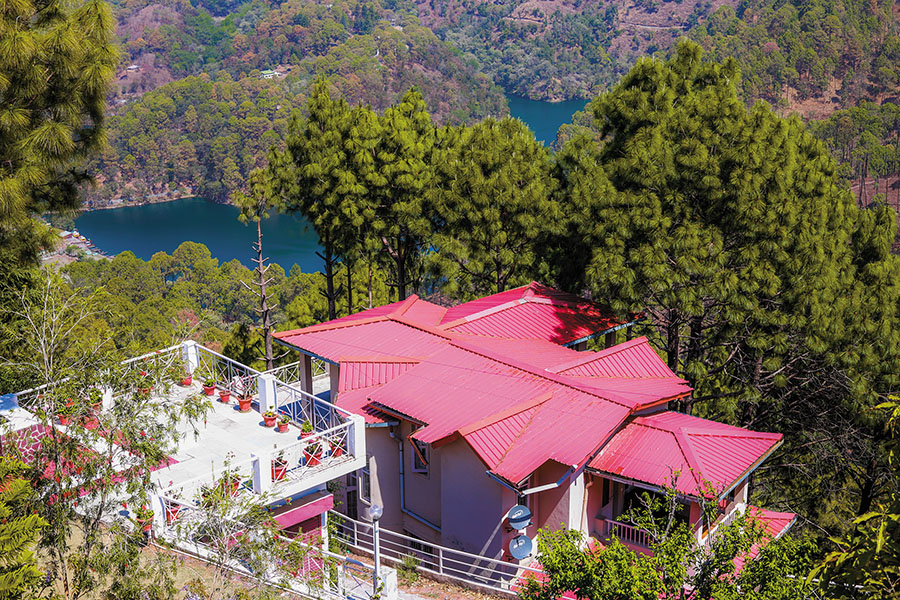 Sattal, which is blessed with a water body that is a confluence of seven freshwater lakes, attracted only seasonal travellers in May and June. “Off-season occupancy was zero, and year-wise numbers were under 15 percent,” she recalls, adding that there were only a couple of cottages in the area, and the vendor ecosystem was not developed which increased the procurement cost. In spite of being fenced by dense forests of pine and oak, which made it perfect for a serene vacation, Sattal was not on top of radar of travellers, who preferred the much-hyped Nainital, some 26 km from Sattal. “It was unviable to manage hotels,” she recounts.

A ‘local’ strategy was devised to develop infrastructure around the quaint town. Unskilled landless labourers were trained with hospitality skills to fix the manpower problem; local vendors were encouraged to take care of rations and other needs; experiences at the local level were curated such as ‘Boat Tea Service’ and the ‘Night Trek’; a waste management process was kicked off around the village and Sattal was put on the weekend gateway map.

Within three years, occupancy jumped to over 70 percent, and a three-month destination was transformed into a year-round stop. “Sattal made us realise that a business model can be built around circular economy,” reckons Balbir, adding that an overwhelming majority of staff employed at all resorts are from the local community. More importantly, Sattal firmly established that ‘offbeat’ can sell.

In spite of the smooth journey, V Resorts is faced with some steep and sharp curves. The biggest is lack of visibility. “The brand proposition of ‘Get Lost’ doesn’t mean that the brand gets lost from travellers’ radar,” says Ashita Aggarwal, marketing professor at SP Jain Institute of Management and Research. Unless V Resorts aggressively advertises and spends some marketing dollars, it might remain a niche player, largely dependent on word of mouth. “Their exotic locations should be hard to find, not the brand,” she adds.

Another challenge for V Resorts is to hunt for a deep-pocket investor that stays for the long term so that the brand can expand its reach. Though V Resorts managed to raise $10 million from a clutch of high net worth individuals this January, what’s still missing is a big venture capital fund. “I am sure V Resorts will find backers, although it must be said that hotels are a capital-intensive business with a long gestation period,” says Somani of Prime Venture. “So it needs a patient, long term investor.”

Balbir, for her part, is focussed on the ‘road less travelled’. V Resorts, she lets on, is set to make its international foray by entering Sri Lanka. “I took the one less travelled by, and that has made all the difference,” she grins. Now, she’s hoping that more and more travellers take that same road.

Tweets by @forbesindia
Podcast: Royal Enfield's silver bullet
India can have a vodka future despite a whisky past: Rodney Williams