In mid-March, software firm Ebix offered to acquire Yatra Online reportedly for $336 million--a premium of over 84 percent of what Yatra was trading in early March 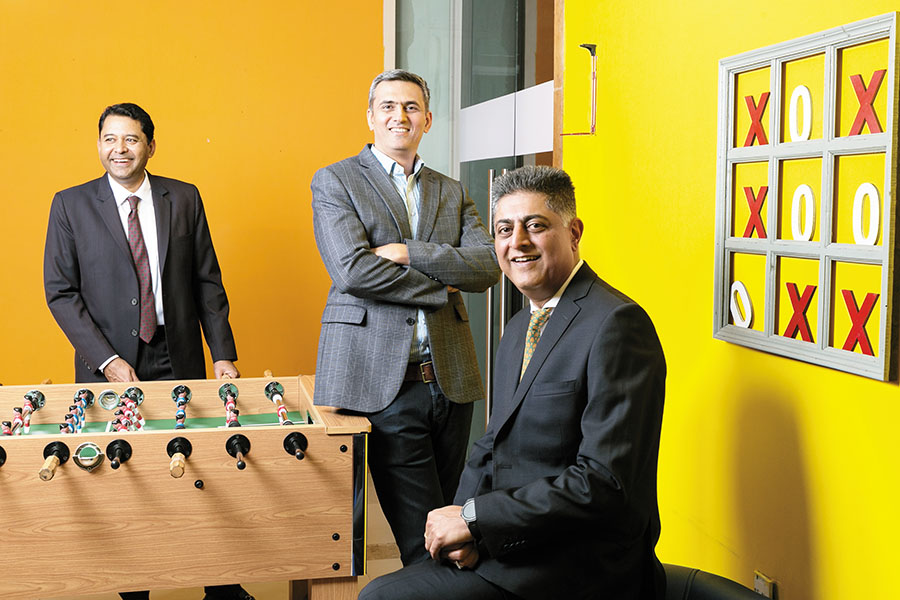 Yatra co-founders Dhruv Shringi (centre), Manish Amin (right) with COO Sharat Dhall
Image: Madhu kapparath
In a research report last July, Citi reckoned that Yatra could be a potential buyout target. Reason: The largest Indian online venture in corporate travel and the second largest in the consumer/leisure market would be a perfect launch pad for a global player looking to enter India. Nine months down the line, the prophecy has turned out to be true. In mid-March, the Nasdaq-listed software firm Ebix offered to acquire Yatra Online reportedly for $336 million, or ₹2,345 crore—a premium of over 84 percent of what Yatra was trading in early March. In a media release a few days after the buyout offer, Yatra informed it had entered into a ‘mutual confidentiality agreement’ with Ebix to further consider the proposal. For Dhruv Shringi, co-founder of India’s second biggest online travel aggregator (OTA) by revenue, it’s been a long, eventful trip since he along with Manish Amin and Sabina Chopra incorporated Yatra in 2006. The launch was just a year after rival and India’s biggest OTA MakeMyTrip (MMT) started India operations. MMT was founded in 2000, with a focus on the United States.

Yatra had a smooth run to begin with. Actor Boman Irani became its first brand ambassador in 2007 with Salman Khan following suit five years later. However, it was towards the end of 2012 that the Gurugram-headquartered venture started facing strong headwinds.

It all started with the grounding of Kingfisher Airlines due to its bloated debt and mounting losses. The turmoil at the private airline coincided with a two-year period in which oil prices ballooned, air fares surged, and flight bookings dipped. The worst, though, was yet to come. Goibibo, owned by South African media conglomerate Naspers, became hyper aggressive in offering hotel discounts in 2015, triggering a bleeding cash burn game among all major players who were trying to match the financial might of their deep-pocketed rival.

“There was this worry that if we didn’t participate, we would miss out,” recalls Shringi, adding that the two years beginning 2015 were intense in terms of cash burn. Every player, he recounts, was trying to figure out the best course of action. For Yatra, shifting focus on corporates seemed to be the best way out. Cut to 2019. “The fear of missing out has dissipated on the back of the strength of the brand,” beams Shringi. The Nasdaq-listed Yatra is now the largest corporate travel service provider in India in terms of gross bookings, boasts of over 800 corporate clients, and its business to business (B2B) segment—which is estimated to contribute 60 percent to revenue—is profitable. “Corporate travel in India is a more exciting and larger opportunity for us,” he says. Yatra’s unique strategy, he lets on, of creating a symbiotic relationship between business and leisure travel, has enabled it to capture the highest spend and loyalty of corporates, as well as to serve the low cost-conscious and opportunistic leisure travellers.

What is adding credence to the corporate makeover of Yatra, from a B2C brand catering to discount-hungry consumers to a B2B one meeting tough expectations of business clients, is the progress made towards achieving operating break-even in the near-term. Take, for instance, steps taken during the October-December quarter (Q3). It optimised marketing cost, drove up cross-sell revenues, closed some loss-making accounts in corporate customer portfolio, outsourcing call-centre operations, and shut down physical retail stores. Yatra’s corporate avatar, underlines Shrinji, is an extension of its consumer activity. Over the next few years, the lines between business and leisure travel will blur, with employees being the consuming class of India, predicts Shringi. The target now is to strike a balance between healthy growth and profit. In a recent Q3 earnings call, Shringi contended that Yatra might be closer to break-even or marginal profitability in 2020. “We are looking at 2021 for free cash flow profitability,” he claimed. That may explain the attractive premium Ebix is willing to pay for Yatra. Network18, publisher of Forbes India, holds a minority stake in Yatra. The premium commanded by Yatra, reckons Saurabh Jindal, analyst at Bonanza Portfolio, shows how lucrative the company has become for those eyeing its corporate portfolio. It also underlines the potential of the Indian corporate market, which is pegged to reach $51 billion in 2021 from $32 billion in 2017. “The pie that Yatra is eyeing is massive,” says Jindal, pointing out the big untapped potential of the corporate travel market in India, which also happens to be the fastest growing corporate travel market in the world. Over 60 percent of India’s travel spend comes from more than 8,000 large corporations and 100,000 SMEs. That Yatra’s B2B venture is profitable is icing on the cake for a potential acquirer. While Yatra’s estimated Ebitda margin for its B2C venture stood at a negative 73 percent in 2017, the same in B2B was a positive 15 percent. The corresponding numbers projected for fiscal 2020 fiscal are a negative 49 percent and a healthy 22 percent, according to a report by Citi Research. In spite of the fact that MakeMyTrip’s consumer business revenues were roughly 13x more than Yatra—based on financial year 2018 results—Yatra seems to be on a firm footing. “Its focus on consumer/leisure travellers in tier II and tier III markets also gives it a substantial differentiation,” says Jindal. What also helped Yatra in undertaking its corporate journey was a timely realisation that it’s almost impossible to make money in the cash-guzzling consumer business. “We decided to conserve cash and get out of the cash burn game,” says co-founder Amin. “You can’t buy loyalty in consumer business by doling out incentives.” In the corporate business, there is client stickiness because of the service provided. “The burn is almost negligible, orders are high—in volume as well as value—and margins are healthy,” he adds. 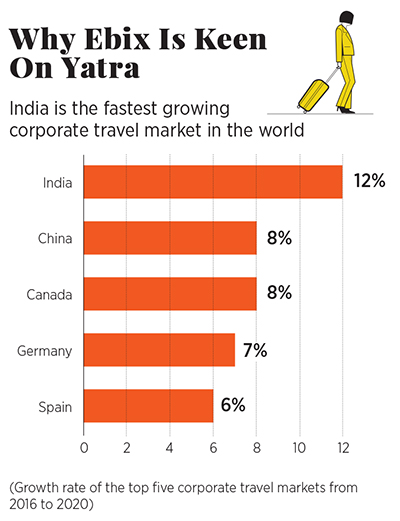 When you are a listed company, points out Shringi, it (high cash burn) becomes even more challenging. “We didn’t want to get sucked too deep into it,” he says. The corporate business, he maintains, allows you to grow in a more sustainable manner.  One should look at raising capital when it’s available, as opposed to when one really needs it. “It’s better to build a war chest… as you can’t time the external markets,” he says. If the deal with Ebix does go through, the co-founders will doubtless be left with a war chest but with little else. It would perhaps then be time to set out on a new yatra.

Tweets by @forbesindia
Video: With a Modi government taking charge again, where will markets go from here?
Thoughts on nobility