In this special issue, India's finest minds share their views on what 2016 could hold for the country

If 2014 was the year of euphoria, thanks to the promise of better days and the decisive mandate with which the Narendra Modi government was elected, 2015 was a reality check for the Indian economy. While the government started fixing several bottlenecks, it became increasingly clear that it would take longer to clear the cobwebs of the past and address the problems holding India back from reaching its true potential. As a senior banker recently told me, the true extent of the patient’s illness had not been understood earlier and the road to sustainable economic well-being would be longer than expected. 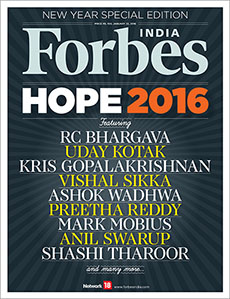 However, viewed dispassionately, the government has been working on a series of steps which, over the medium to long term, will begin yielding results. There have been serious efforts to introduce greater transparency in the allocation of natural resources, reform in the power sector by way of the Ujwal Discom Assurance Yojana (UDAY) scheme, allowing foreign direct investments in a slew of areas and a plan to improve the health of public sector banks. The government is keen to improve the ease of doing business and its efforts are beginning to show results, with India jumping 12 places in the World Bank’s ease of business rankings.

In this New Year Special issue, we are delighted to bring you a formidable lineup of India’s finest minds—across sectors and disciplines—who share their views on what 2016 could hold for the country. They convey a sense of optimism that, despite the problems, there is enough firepower to ensure that the economy will be on the road to prosperity. The second quarter of FY16 saw India grow at 7.4 percent, faster than China in the same quarter, powered by a robust growth in manufacturing. While some like rating agency ICRA have recently pointed out that only a few sectors are driving economic recovery, those like Ashok Wadhwa feel ‘structural resets’ by the Modi government entail some short-term pain for long-term gain. And despite his opposition to the government’s policies, Congress MP Shashi Tharoor says he is hopeful, because India’s fundamentals are positive.

This, in essence, is what 2016 will be: A year of hope. A year when the government is expected to clear more policy roadblocks to ensure that the energy of India’s youth and enterprise is unleashed in spectacular fashion on the world stage. Because India is an idea whose time has come.

Have a prosperous and peaceful 2016!