M&M and the Power of Chance

M&M showed that if an organisation has the stomach for calculated risks and a focus on product development, results will often follow

In October, Pawan Goenka, the executive director who heads the vital automotive and farm equipment sectors at Mahindra & Mahindra, made a presentation at this year’s Forbes India Leadership Awards in Mumbai. He demonstrated how, in a resource-constrained country like India, jugaad, or homegrown innovation, can help overcome major challenges. Goenka is, perhaps, the best person to speak on the subject. In the 21 years that he has been with Mahindra, he, together with present group chairman Anand Mahindra, has successfully transformed the company from a relatively insignificant player to one of the biggest names in India’s auto sector, and one with serious global ambitions. M&M has demonstrated that if an organisation and its leadership have the stomach for calculated risks and a focus on product development and innovation, results will most often follow. 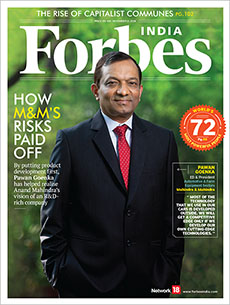 The fear of failure has often pushed some of the biggest corporations away from critical decision-making. But when Goenka decided to place his bets on in-house product development capabilities, Anand Mahindra backed him. Today, the automotive and farm equipment businesses contribute 75 percent of M&M’s nearly Rs 44,000 crore revenues; profits have surged 55 times and revenues 25 times since Goenka joined.

The M&M product development thrust gained serious momentum with the launch of the Mahindra Research Valley in 2005, and that has been strengthened by the establishment of a technology centre in Detroit this year. The North America centre is meant to expedite the company’s development expertise. However, despite the obvious successes, M&M’s top management is acutely aware that if the company is to aim for leadership in the premium SUV segment, a lot more will need to be done on the product development side. Deputy Editor N Madhavan, who had multiple conversations with the M&M top management over several days in Mumbai and Chennai, finds product development is a constant work-in-progress at the company.

This issue also showcases the Forbes list of the World’s 72 Most Powerful People, where Indian Prime Minister Narendra Modi debuts at number 15. He is among 12 new entrants in this year’s power list, along with Alibaba founder Jack Ma, now a true-blue global phenomenon. And beyond their current power quotient, it will also be worth following the trajectory of their subsequent rise over the years.