A quintessential entrepreneur, the Myntra founder has decided to test himself all over again

There are entrepreneurs who set up businesses, achieve success and valuations and then choose to continue on that journey on cruise control mode. And then there is Mukesh Bansal, the 40-year-old founder of India’s best-known online fashion retailer Myntra. 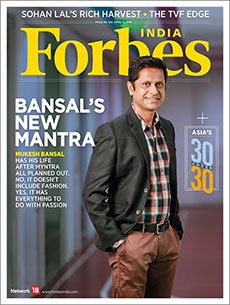 Bansal, whose company was acquired in 2014 by Flipkart in order to create a behemoth and take on the might of Amazon in India, has decided to shake things up for himself. Typical of a quintessential entrepreneur who is never satisfied with what he’s achieved, Bansal has decided to quit the Flipkart-Myntra combine and head into new terrain. Not that he was short of work after Myntra was acquired: Bansal became chairman of the Myntra board and head of Flipkart’s commerce system; he was recently given charge of Flipkart’s advertising business. But that clearly wasn’t enough for him, and he has decided to test his skills as an early-stage entrepreneur yet again.

Not many in Bansal’s position would do what he’s done: Leave the relatively cushy confines of a successful business, the $15-billion Flipkart, and move into uncharted waters. But Bansal is not new to the unpredictable yet exciting world of startups, having worked in four of them during his days in San Francisco where he moved after quitting his job as a Deloitte analyst in Chicago. As Bansal candidly tells Senior Assistant Editor Debojyoti Ghosh: “I want to feel like an early-stage entrepreneur again and see if I can do it one more time.” Joining him in his latest gig—he says the new venture will not be in the world of fashion like Myntra was, but a mix of sport, fitness and health care—is Ankit Nagori, Flipkart’s former chief business officer who also quit along with Bansal.

Armed with an entrepreneurial drive and the zest to build a successful business yet again, Bansal has set out on his new innings with confidence and the will to win. His second outing, those who know him say, may turn out to be even more interesting than his first, given his track record in pivoting Myntra from a personalised gifting company to a highly successful online fashion retailer.

This issue also has other interesting entrepreneurial stories, notably that of Sohan Lal Commodity Management, a company which, by sheer dint of innovation, has become a major success in the complicated and tough world of agri-commodity storage. The asset light model which Sohan Lal has opted for also eliminates wastage, a huge problem in Indian agriculture, by conducting random checks and timely reporting through hand-held tablets. Not surprisingly, Sohan Lal and its chief executive Sandeep Sabharwal are the toast of investors. And a story of enterprise worth taking note of.