It's just the dawn of electric mobility, but Coimbatore-based Ampere Vehicles' plants are churning out e-bikes and e-cycles in top gear 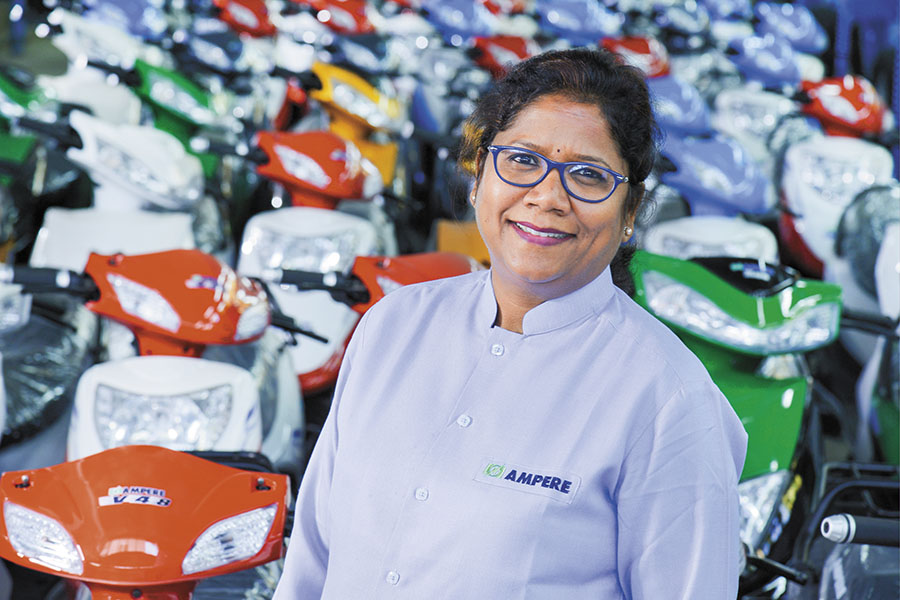 Hemalatha Annamalai refuses to disclose how old she is despite numerous requests. “You really need this data?” asks the founder and CEO of Ampere Vehicles Pvt Ltd (AMPVL). Set up in 2008, the Coimbatore-based company, which counts Ratan Tata and Infosys co-founder Kris Gopalakrishnan as investors, manufactures electric cycles (where one can switch between a pedal and battery mode), scooters and three-wheelers.

There’s something else she’s not willing to divulge: AMPVL’s revenues and profits. “We are in advanced discussions to raise funds. So I can’t share these details,” she says.

While Annamalai fiercely guards such information, what cannot stay hidden is her entrepreneurial streak. “Hema is not financially savvy, but she has built the foundations of a valuable game-changing enterprise,” says Hemchandra Javeri, co-founder and MD, Forum Synergies (India) PE Fund Managers. The fund was the first big investor to back AMPVL in 2013, “as we believed in Hema and identified her as a pioneer with a disruptive model in the e-bikes market,” adds Javeri.

After much goading, Annamalai relents, but only just. “I’ve crossed my half century, okay,” she says of her age. And they’ve been a productive 50-plus years during which she co-founded four companies across domains such as embedded software tools, ticketing services, talent acquisition and technology training services. She has since exited them.

“I was tired of the services business—writing code and selling software. I wanted to do something different,” says Annamalai. Her husband, Bala Pachyappa, who is CTO of AMPVL, was at a conference in Japan in June 2007 where a unit head of automotive giant Toyota spoke of the “end of the era for internal combustion engines”. Immediately after the forum, he called up Annamalai. “I didn’t know what he was talking about,” she confesses. But after much research and a trip to the International Mobility Conference in Geneva in December 2007, Annamalai saw a future in building electric vehicles.

With two facilities in Coimbatore, AMPVL has an installed capacity of 60,000 vehicles a year. The fund raising that Annamalai speaks of is meant to scale up production and R&D capabilities. “Currently, we are focussed on developing our own integrated battery vehicle management system,” she says. The company has also developed an electric three-wheeler named Trisul for the needs of women mill workers in Tamil Nadu.

“Hema has extraordinary passion and perseverance, with a strong sense of purpose and the dream of providing affordable mobility solutions for the masses in India,” says Javeri.