Up or down, is the question after the Indian rupee has been playing snakes and ladders against the dollar in 2022 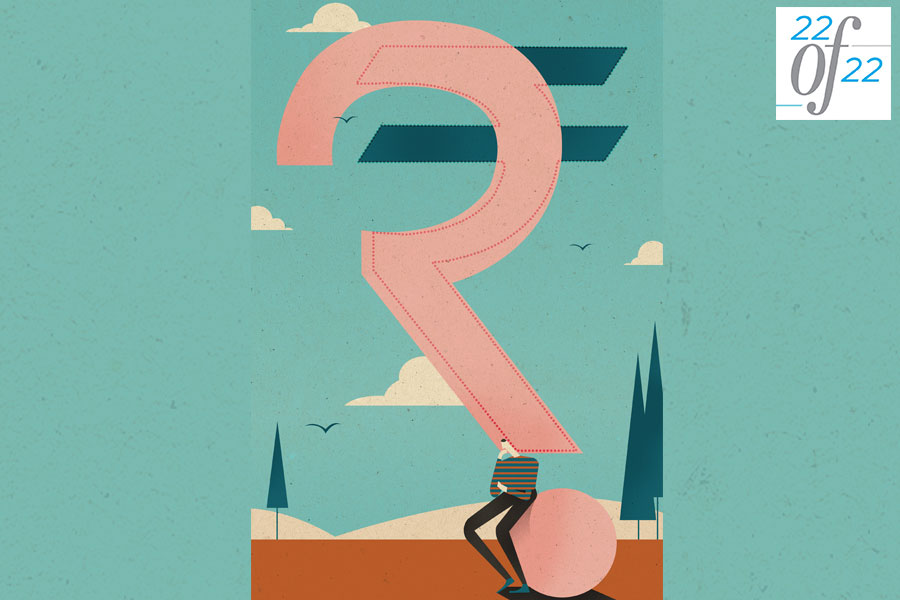 Inflation soared to 9.1 percent in the US in July 2022—the highest it’s been in four decades. Illustration by: Chaitanya Dinesh Surpur

Since the start of the year, the rupee has slid by around 10 percent against the US dollar, even breaching the 83-per-dollar mark in October, a record low.

Since mid-November, however, the rupee begun to strengthen against the greenback, hitting levels of Rs 80.50 to Rs 81 per dollar. At the timing of writing in early December, the Indian currency was around Rs 82 per dollar. So is the rupee set to recoup in the coming year or can it slide any further?

Finance minister Nirmala Sitharaman had famously said it’s not the rupee that is falling, but the dollar that is strengthening, when asked about it on the sidelines of a World Bank meet. Her statement led to a flurry of memes on social media, but she was, in fact, technically correct.
Not just India but all countries, advanced and emerging, have been impacted by the dollar’s rise. India, in fact, has been a relative outperformer. The rupee has weakened by around 10 percent against the greenback since the start of the year, compared to other currencies such as the British pound, the euro, the Japanese yen and the Chinese yuan, which all slid by 15-20 percent.

So why has the US dollar been strengthening?

The simple answer is inflation. During the pandemic, the US central bank, the Federal Reserve, printed a lot of money and distributed to its people. At that point they didn’t have much to spend on. But, as the economy opened up post-Covid, they began spending it, which led to a spike in the price of goods and services. As these went up, inflation went up.

In a bid to control inflation, the Fed began to hike interest rates aggressively. US Treasury yields soared as a result. The two-year US government bond, which fetched 0.25 percent last year, now fetches 4.4 percent. So investors started pouring money into the US. As money flowed to the US, the demand for dollars increased and the currency began to strengthen.

But, starting November, the US dollar began weakening and the Indian rupee strengthening. A number of factors led to the uptick. First, crude oil prices started easing off from about $110-$115 a barrel to sub-hundred levels. This meant a lower import bill for India and less pressure on the rupee. Second, the dollar index, which measures the value of the dollar against a basket of six currencies, dropped from above 113 to below 110. A weakening dollar leads to a strengthening rupee.

Third, domestic equities started seeing a surge in inflows thanks to the “China substitution effect”, says Sajal Gupta, executive director and head, FX and rates at Nuvama Wealth Management. China’s zero-Covid policy, the lacklustre performance of its domestic equities market and its tiff with Taiwan led investors to pull money out of China and into other, more promising emerging markets, like India.

The rupee held its own through November fluctuating in the Rs 80- Rs 81 per dollar range. However, in early December, it fell to Rs 82- Rs 82.5 range.

While currency fluctuations of about Rs 1 to Rs 2 per dollar are commonplace and much should not be read into them, Gupta believes the recent weakening of the rupee is “surprising” as all the “macros are in place” for the rupee to only strengthen. Crude oil prices are lower, the US Fed has signalled easing of interest rate hikes and inflation is being tamed globally as well as in India.

“The RBI did a pretty good job of managing the forex flows and volatility in the markets. Otherwise, we would have seen the rupee fall to Rs 86 to Rs 88 per dollar levels,” he says. Forex reserves are down almost $100 billion in the last 12 months. But, as Gupta says, “Reserves are meant for a rainy day, so I think the RBI did well in using them in a timely manner.” Gupta believes the rupee should be heading towards Rs 80 per dollar mark in the next three to six months.

A key concern, however, is India’s ballooning current account deficit—the difference between its import and export bill—which stands at around $25 billion or roughly three percent of Gross Domestic Product (GDP), up from $13.5 billion (1.5 percent of GDP) in Q4 of 2021-22.

“The current account deficit might hinder the rupee’s strength going forward,” says Gupta. Think of it this way: In a world of depreciating currencies, if the rupee doesn’t move, it would become stronger relative to the other global currencies. This would make India’s exports less competitive, hindering job creation and overall growth. So letting the rupee weaken in a calibrated manner by prudently drawing down on forex reserves and gradually raising interest rates—which is what the RBI has been doing since September—acts as a shock absorber, giving India the necessary competitiveness vis-a-vis other countries.

As the IMF says, India is a bright spot, but not without exercising caution and careful currency management.
Also Watch-