22 for 2022: Policy normalisation to continue in the new year

The US Federal Reserve rate hike cycle may cool off in the second half of 2023, and India is not entirely immune to a global slowdown 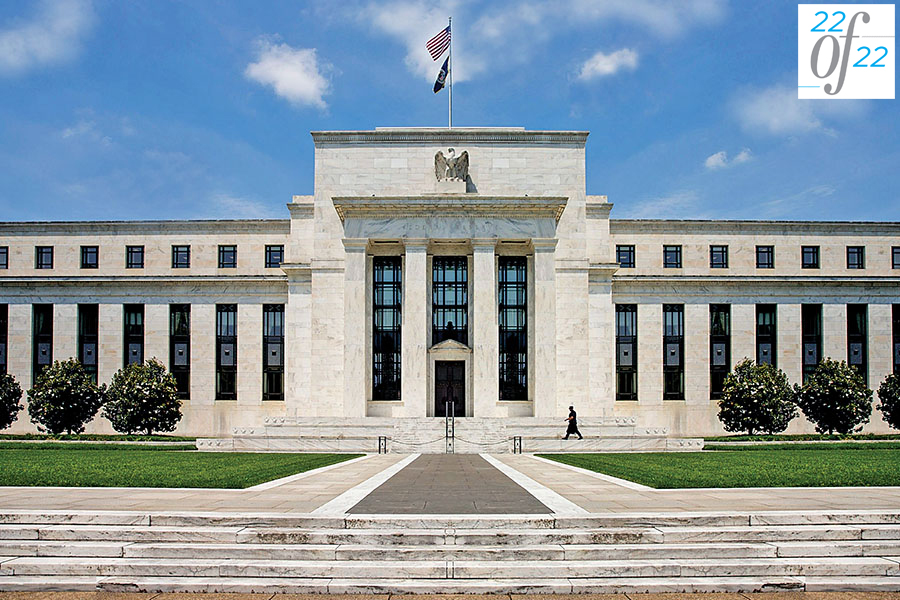 In 2022, the US Federal Reserve has increased interest rates six times, leaving a trail of other global central banks like the Bank of Japan and the European Central Bank to do the same. Image Credit: Shutterstock

As economies started to recover from the pandemic shocks amid rising inflation, central banks around the world withdrew stimulus by aggressively increasing interest rates in 2022, thus ending an era of easy and abundant liquidity, often described as monetary policy normalisation.Slowing global growth and a tightening monetary stance on steep inflation in advanced economies have been hindering growth in emerging markets, including India, according to economists. In India, fiscal consolidation is expected to be challenging in the year ahead due to weak growth and the upcoming general elections in 2024.

Most economists expect the US Federal Reserve rate hikes to peak in the initial months of 2023 as it continues to combat inflation. According to Nomura, a developed markets recession may unleash faster disinflation in Asia from the second quarter of 2023. “The rate hiking cycle is in its finale and we expect policy rate cuts in the second half of 2023 and into 2024. Amid weak growth, fiscal consolidation plans will likely be derailed,” say Nomura economists.In 2022, the US Fed has increased interest rates six times till the December Federal Open Market Committee (FOMC) meeting, leaving a trail of other global central banks like Bank of Japan and European Central Bank doing the same. That wiped off equity investors’ money off the table as stock markets fell as a reaction.According to Reuters, in 2022, total interest rate hikes have been up to 2,400 basis points (bps) by G10 central banks. In 2022 so far, emerging market central banks have raised interest rates by a total of 7,165 bps, a sharp increase from 2,745 bps for the whole of 2021, Reuters data analysis shows. One basis point is one-hundredth of a percentage point.

UBS’s economists expect the US Fed to raise rates by 75 bps in December and another 50 bps in February, putting the target range for the federal funds rate at 4.75 percent to 5 percent. “That said, we would expect a rapid Fed pivot. After a final rate hike in February 2023, we would expect the Fed to be on hold for six months, then cut rates by 400 bps in the nine months thereafter, nearly twice the typical speed, to 1.25 percent,” it says. For the US, UBS now sees near-zero growth in both 2023 and 2024 and a recession to start in 2023.Also read: World economy is slowing more than expected

How India will fare

Back home, inflation continues to be one of the biggest worries for the Reserve Bank of India (RBI). The monetary policy committee’s (MPC) concerns on inflation remain, due to risks from ongoing geopolitical conflicts, imported inflation stemming from US dollar appreciation, high uncertainty on crude oil prices and incomplete pass-through of input costs to prices. Though retail inflation has cooled off, October data of 6.77 percent is still much above RBI’s inflation target of 2-6 percent.Radhika Rao, senior economist, DBS Bank, projects the RBI and Fed policy rates peaking at 6.5 percent and 5 percent respectively in the first quarter of 2023. “Headline inflation will stay above the 2-6 percent target band in the rest of FY23, before slipping to 5-6 percent range in FY24. For the year, our inflation forecast for FY23 is at 6.8 percent, followed by 5.2 percent in FY24,” Rao says.With the interest rate hike in December, the policy rate has touched 6.25 percent after three back-to-back rate hikes of 50 basis points each in June, August and September.Also read: Asia: Looking the US recession in the eye?
Tanvee Gupta Jain, economist, UBS India, sees the RBI’s policy outlook to be data-dependent contingent upon Fed action, Indian rupee weakness and the delayed impact of monetary tightening on India’s inflation and domestic growth outlook. She expects the RBI to raise the repo rate to 6.5 percent by end of FY23 and go for an extended pause in FY24, suggesting the real policy rate will gradually move back into positive territory in FY24.

“Going into 2023, we forecast a historically weak outlook: Global growth of just 2.1 percent year-on-year, which would be the lowest since 1993 [excluding pandemic and great financial crisis]. Even as India will likely be one of the lesser affected economies due to the spill-over effect of a global slowdown, it is not immune,” Gupta adds.According to Goldman Sachs, retail inflation is likely to decrease to 6.1 percent (average) in 2023 from an estimated 6.8 percent in 2022.  “With India running negative real rates, and our peak Fed funds rate forecast at 5 to 5.25 percent in 2023, the RBI is likely to hike the repo rate by 35 bps in February, taking it to 6.75 percent by February 2023. We bake in a 25 bps repo rate cut in the fourth quarter of 2023, if inflation pans out as per our forecasts to reach 5.3 percent by then,” Goldman Sachs economists explain.