The battle against inflation is not over, says the RBI governor, indicating the rate hike cycle has not peaked yet. But economists are hopeful of some respite after a likely 25 bps rate hike in February 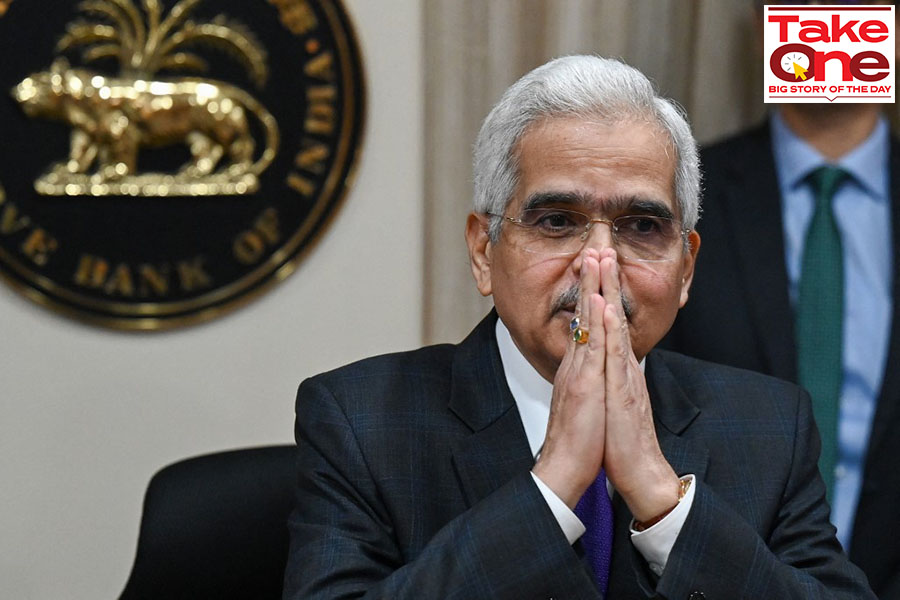 In its December meet, the Reserve Bank of India’s (RBI) Monetary Policy Committee (MPC) raised the benchmark rate by 35 basis points to 6.25 percent while retaining its stance of “withdrawal of accommodation”. It cut its growth outlook to 6.8 percent from 7 percent previously and held its inflation estimate of 6.7 percent for the current fiscal year (see table). Interestingly, on Tuesday, the World Bank increased its FY23 GDP forecast for India to 6.9 percent from 6.5 percent in October.

“What do these growth and inflation scenarios convey? GDP growth in India remains resilient and inflation is expected to be moderate, but the battle against inflation is not over. Pressure points from high and sticky core inflation and exposure of food inflation to international factors and weather-related events do remain,” explained Shaktikanta Das, governor of RBI.

Das cautioned that the global economy is still marred by profound shocks and unprecedented uncertainty, but reassured that India’s financial system remains robust and stable, calling it a bright spot in an otherwise gloomy world. “Banks and corporates are healthier than before the crisis,” he added. 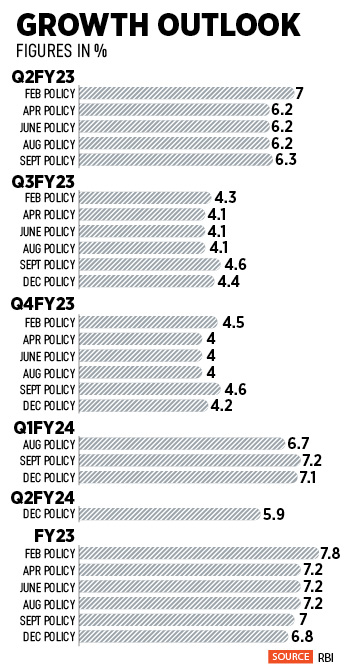 As for future guidance on rate hikes, the central bank remained elusive, asserting that it would be nimble in its policy actions and act in the best interest of the economy and the aspect of growth will “obviously” be considered as it monitors inflation dynamics. “The course of our future policy will duly consider new data releases and the evolving outlook of the economy as well as the effect of our past actions,” Das said.

Most analysts and economists expect the terminal repo rate to be between 6.25 and 6.5 percent. “The governor made it clear that the fight against inflation will continue, while India's growth remains more resilient. It is, thus, clear that there will be at least one more rate hike of 25 basis points in CY23,” says Nikhil Gupta, chief economist, Motilal Oswal Financial Services.

Lakshmi Iyer, CEO, Investment Advisory, Kotak Investment Advisors, believes the rate hike cycle is not over as inflation continues to remain a concern. She expects the bond markets to give up some gains and trade range bound as global growth concerns dominate and she will be watchful of policy cues from the US Federal Reserve.

However, the credit policy outcome was not a unanimous decision. Five of the six members of the rate-setting panel voted for a rate hike of 35 basis points and two MPC members voted against the continuation of the policy stance. “The MPC continues to remain split, with one dissent in favour of a pause, and two dissents against the current stance, further suggesting that the rate hiking cycle is nearing its end. We [expect] a final hike in February of 25 basis points, which remains a close call, and then a hold. We are now pencilling in 75 basis points in cumulative cuts in H2 2023, taking repo rates back to 5.75 percent by end-2023,” says Aurodeep Nandi, India economist and vice president at Nomura. 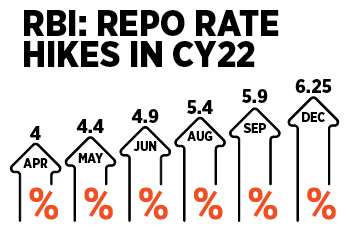 A year ago, Das had asserted the RBI would do whatever it takes to support durable recovery. “Overarching priority at this juncture [is] to broaden the growth impulses,” Das had said in the last credit policy meeting of 2021.

However, after nearly two years of unprecedented liquidity and low interest rates to battle a once-in-a-lifetime pandemic, central banks worldwide find themselves with a bigger problem to solve. On the one hand, nations have to revive economic growth after months of lockdowns and Covid-related social restrictions. Plus, countries have to reign in rampant inflation. The means to achieve one goal, required sacrificing the other. 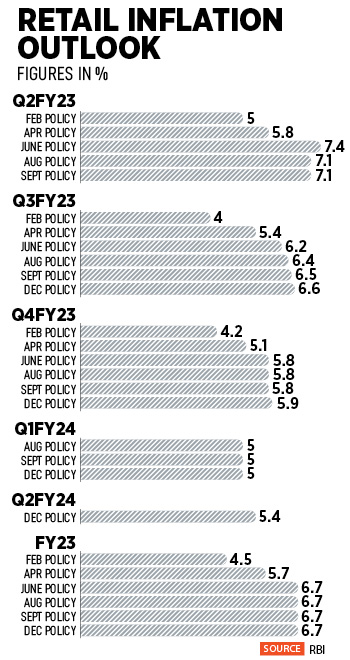 After the US Federal Reserve’s move to hike benchmark rates to arrest 40-year high inflation levels, Das, after months of muted policy response, cracked the whip on rising prices in an off-cycle emergency MPC meeting in May. Until then, ironically, interest rates stood at a historic low of 4 percent, inflation hovered around 7 percent, but growth was stunted with feeble signs of recovery.

“There is the collateral risk that if inflation remains elevated at these levels for too long, it can de-anchor inflation expectations which, in turn, can become self-fulfilling and detrimental to growth and financial stability,” Das had announced in May.

In fact, inflation is likely to remain above the MPC’s upper threshold of 6 percent (see table). It is seen to be on a downward trajectory though. Tanvee Gupta Jain, UBS India economist, says, “Inflation in India will remain sticky and stay above the RBI’s medium-term target of 4 percent in FY24 due to uncertainty regarding the food inflation outlook.”

India’s economy registered a growth of 6.3 percent in the July-to-September quarter, in line with RBI’s growth projections. The domestic economy grew 8.4 percent during the same period last year, and 13.5 percent in the previous quarter, as per data released by NSO. 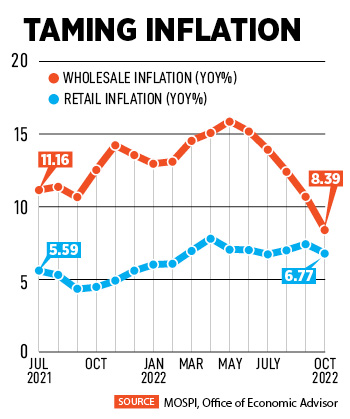 Nomura says India’s growth rate cycle has peaked and a broad-based slowdown is underway. “While lower inflation should help support private consumption in coming months, the lagged effects of tighter financial conditions and weak global demand will weigh on both investment and exports, while the post pandemic catch-up in services is largely complete. We expect GDP growth to slow from 6.8 percent year-on-year in 2022 to a below-consensus 4.7 percent in 2023,” its economists say.

Globally, there is a marked slowdown in demand and central banks are on a rate-hiking spree. India, though the fastest growing major economy, could see some of its exports-dependent sectors get affected. Yet, the domestic market is on the road to recovery. The question remains if the current pent-up demand will sustain in the coming quarters and if inflation will loosen its grip on the economy.