Since May the Reserve Bank's Monetary Policy Committee has hiked the benchmark rate by 1.9 percent. Economists and market watchers expect a repo rate hike of at least 35 basis points next week 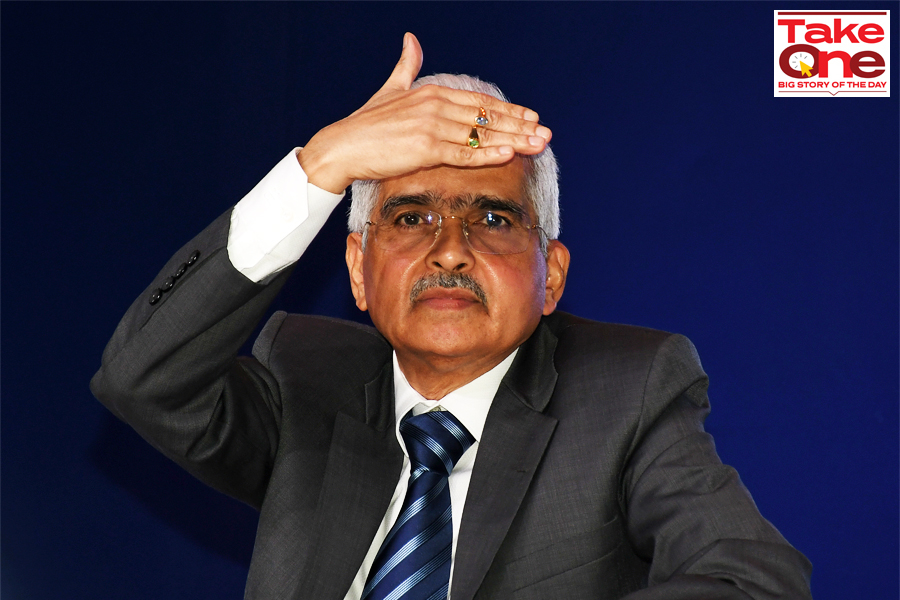 A lot changes in one year. This time last year, the Reserve Bank of India chose to look the other way despite firm signs of rising retail and wholesale price levels. A few economists and market veterans the author interacted with a year ago dismissed the alarming trend as “transient”. What other option does the central bank have, they argued. But many economists feared that inflation—as we at Forbes India also wrote—was very much the elephant in the economy.

At that time, Shaktikanta Das, RBI governor, had asserted the central bank would do whatever it takes to support durable recovery. “Overarching priority at this juncture (is) to broaden the growth impulses,” Das said in the last credit policy meeting of 2021.

However, after nearly two years of unprecedented liquidity and low interest rates to battle a once-in-a-lifetime pandemic, central banks worldwide found themselves with a bigger problem to solve. On the one hand, nations had to revive economic growth after months of lockdowns and Covid-related social restrictions. Plus, countries had to rein in rampant inflation. The means to achieve one goal required sacrificing the other. 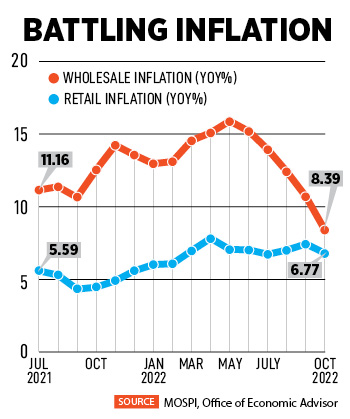 Spurred by the US Federal Reserve’s move to hike benchmark rates to arrest 40-year high inflation levels, Das, after months of muted policy response, cracked the whip on rising prices in an off-cycle emergency MPC meeting in May. Until then, ironically, interest rates stood at a historic low of 4 percent, inflation hovered around 7 percent, but growth was stunted with feeble signs of recovery.

“There is the collateral risk that if inflation remains elevated at these levels for too long, it can de-anchor inflation expectations which, in turn, can become self-fulfilling and detrimental to growth and financial stability,” Das announced in May.

In short, the adverse turn of macroeconomic events pushed the central bank to prioritise inflation over growth. Since May, the RBI’s rate-setting panel has raised the repo rate by 1.9 percent to 5.9 percent.

In its previous three-day huddle in September, the six-member rate-setting panel had announced a repo rate hike of 50 basis points and its decision to continue to focus on withdrawal of accommodation. The RBI held its CPI inflation projection at 6.7 percent but lowered its GDP estimate to 7 percent from 7.2 percent for FY23.

Analysts and economists expect the terminal repo rate to be around 6.25 percent, and they do not rule out a repo rate hike of 35 basis points in the upcoming monetary policy meeting from December 5-7. 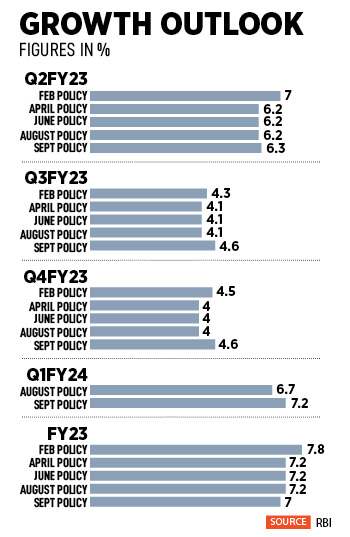 “The average CPI in India for FY24 is expected in the band of 5.00-5.25 percent. We expect 35 basis points hike in the December policy, along with change in monetary policy stance from ‘withdrawal of accommodation’ to ‘neutral’ indicating further action to be data dependent. Post this hike, the overnight rates in India would have increased by approx. 300 basis points during CY22,” says Deepak Agarwal, CIO (debt), Kotak Mahindra AMC.

Inflation is far beyond the MPC’s upper threshold of 6 percent. It is seen to be on a downward trajectory, though. Crude oil, an important constituent of the price basket, has reduced from about $120-130/bbl. in March to around $82-85/bbl. in November, marginally lower since the previous MPC meet in September.

However, advisory firm Emkay Wealth Management expects three factors to drive up crude oil prices: One, the upcoming holiday season and the onset of winter; Two, Chinese authorities may ease the zero-Covid policy which will lead to an uptick in global oil prices; Three, the possibility that the supply of Russian oil may be curbed to 2.5 million barrels per day from 5 million barrels per day.

Thereby, the inflation trajectory is unclear. Tanvee Gupta Jain, UBS India economist, says, “Inflation in India will remain sticky and stay above the RBI’s medium-term target of 4 percent in FY24 due to uncertainty regarding the food inflation outlook.”

Importantly, India’s economy registered a growth of 6.3 percent in the July to September quarter, in line with RBI’s growth projections. The domestic economy grew 8.4 percent during the same period last year, and 13.5 percent in the previous quarter, as per data released by the National Statistical Office (NSO). 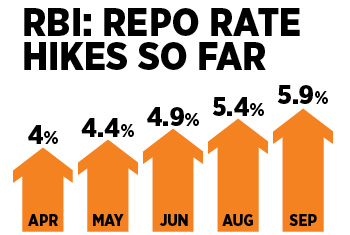 Nomura says India’s growth rate cycle has peaked and a broad-based slowdown is underway. “While lower inflation should help support private consumption in coming months, the lagged effects of tighter financial conditions and weak global demand will weigh on both investment and exports, while the post-pandemic catch-up in services is largely complete. We expect GDP growth to slow from 6.8 percent y-o-y in 2022 to a below-consensus 4.7 percent in 2023,” its economists say.

HSBC India’s chief economist Pranjul Bhandari expects the RBI to narrow the pace of rate hikes. “We now expect the RBI to hike by 35 basis points at the December 7 policy meeting versus 50 basis points earlier, taking the repo rate to 6.25 percent,” Bhandari notes. 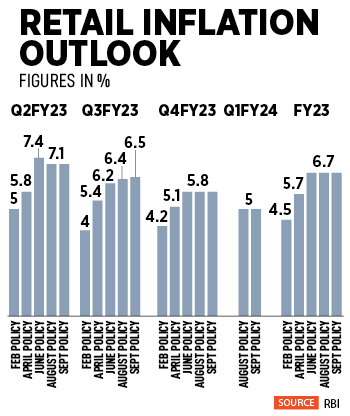 Moreover, GST collections have been strong, averaging Rs 1.49 lakh crore on a monthly basis. In fact, October reported the second highest level at Rs 1,51,718 crore, according to government data. Furthermore, the capex cycle has picked up, and private enterprises, reportedly, are ready to increase investments. RBI data suggests corporate bank loans increased to 12.6 percent versus 1.7 percent on a y-o-y basis.

Globally, there is a marked slowdown in demand and central banks are on a rate-hiking spree. India, though the fastest growing major economy, could see some of its exports-dependent sectors get affected. Yet, the domestic market is on the road to recovery. The question remains if the current pent-up demand will sustain in the coming quarters.

The Confederation of Indian Industry has called for a moderation in the pace of rate hikes. It said a study of the profitability of 2,000 companies indicated that top-line and bottom-line growth were impacted. The MPC is unlikely to hold rates in this meeting. A rate hike of 35 basis points seems to be in the offing in December. But future rate hikes, according to analysts and economists, will be data dependent.

Also, the local unit has been reeling under the strengthening greenback. The rupee has breached the crucial 80 mark against the dollar and ended at 81.38 on Wednesday. The looming threat of a global recession, depleting forex reserves, widening trade deficit, and FPI outflows continue to weigh on the rupee. Despite interventions to stem the fall in the rupee, RBI Governor Das believes the exchange rate must be left to market forces. There could, however, be some announcements on liquidity management.

Tweets by @forbesindia
Photo of the day: No respite
India's 100 Richest: Why is it still a man's world?