2023 and the game of taming recession 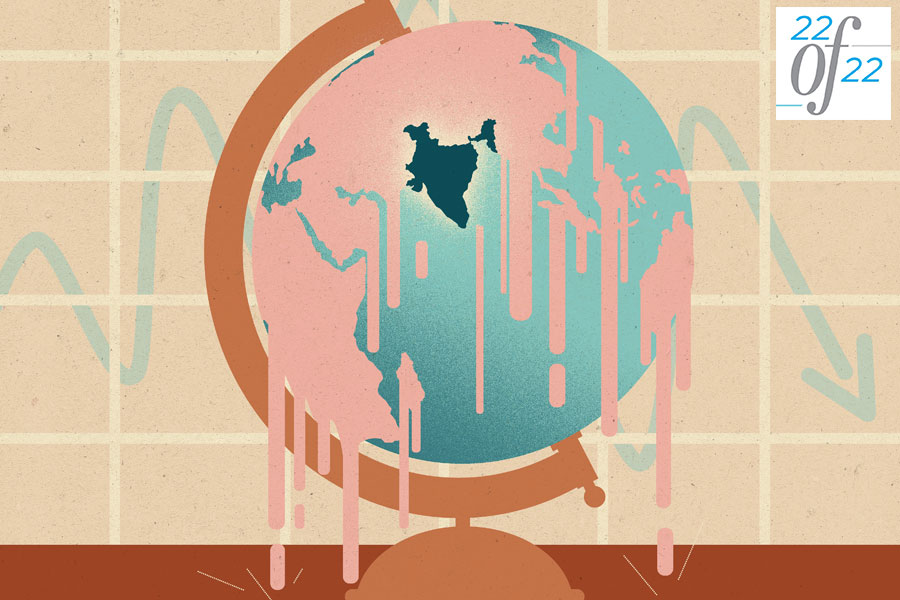 Global agencies expect countries representing a third of the world output to be in recession in 2023. Illustration credit: Chaitanya Surpur

Recently, Fitch Ratings in its latest Global Economic Outlook report, reduced its world growth forecast for 2023 to 1.4 percent versus 1.7 percent in September. “Taming inflation is proving to be harder than expected as price pressures broaden and become more entrenched. Central bankers are having to take the gloves off. That won’t be good for growth,” says Brian Coulton, chief economist, Fitch Ratings.

Global agencies expect countries representing a third of the world output to be in recession in 2023. The concerns stem from the colliding pressures from inflation, the war-driven energy and food crisis, and higher interest rates. The International Monetary Fund sees these worries to be pushing the world to the brink of recession.The three largest economies—the United States, China, and the Eurozone—are likely to continue to slide, the International Monetary Fund highlighted in October. “The worst is yet to come, and for many people, 2023 will feel like a recession,” the fund said.In its December report, Fitch decreased its China growth forecast for 2023 to 4.1 percent from 4.5 percent as the Chinese property market continues to languish. “It looks like a comprehensive economic blow-up in China of not just the housing market but also its financial system,” Saurabh Mukherjea, founder and CIO, Marcellus Investment Managers told Forbes India in an interview earlier.Also read: RBI: Will keep Arjuna's eye on inflation
Beijing’s decision to restore its Mao-era policies of the 1950s by way of a controlled economic system has rattled the outside world. The regulatory crackdowns on technology companies, its bitter relations with the US, and rising geopolitical tensions have added to the woes. “There is a negative vicious cycle going on in the property sector amid the zero-Covid strategy. As a growth engine, China is clearly weakening and I think that will have an impact on the rest of the world,” says Sonal Varma, MD and chief economist, India and Asia ex-Japan at Nomura.The European gas situation is believed to have eased a bit, and Fitch has increased its 2023 growth estimate for the eurozone to 0.2 percent from -0.1 percent. “But the crisis is far from over and high wholesale gas prices continue to weigh heavily on firms’ costs and household budgets,” it warns.Furthermore, rising prices are offsetting the benefits of easing supply-chain constraints in many industries. While retail inflation is expected to cool in the coming months as food and energy prices settle, economists expect core inflation to persist. “Our latest 4.75 percent peak forecast for the Bank of England has been revised up by 150 basis points. We do not anticipate a pivot to rate cuts until 2024,” notes Fitch in its December report.

Against this backdrop, the Indian economy is pegged to grow around 6 percent in the calendar year 2023. IMF calls it the bright spot. Relatively, India and several emerging Asian countries are more resilient to global headwinds, but not isolated to escape it unscathed.India’s economy grew by 6.3 percent in the July to September quarter, in line with RBI’s growth projections. The domestic economy grew 8.4 percent during the same period last year, and 13.5 percent in the previous quarter, as per data released by NSO. Meanwhile, inflation continues to hover much above the RBI’s upper threshold of 6 percent.   Nomura says India’s growth rate cycle has peaked and a broad-based slowdown is underway. “While lower inflation should help support private consumption in coming months, the lagged effects of tighter financial conditions and weak global demand will weigh on both investment and exports, while the post pandemic catch-up in services is largely complete. We expect GDP growth to slow from 6.8 percent YOY in 2022 to a below-consensus 4.7 percent in 2023,” its economists say.

The markets are largely in a state of euphoria. But Sanjeev Prasad, MD and co-head, Kotak Institutional Equities, says the growth ‘narrative’ for India is perplexing since three-year macro and micro data indicate that economic growth continues to be fairly muted.

“The continued upward movement in the Indian market and expensive valuations reflect the market’s optimism about strong growth in India. The market seems focussed on the YoY recovery, which would be strong anyway, given a Covid-impacted base,” Prasad adds. He points to the domestic automobile sector as a case in point: Auto companies are trading at near all-time-high multiples although sales volumes have been in duress on a long-term basis.

Tweets by @forbesindia
Where will the rupee go in 2023?
Wrinkles, imperfections, firmness: Skincare has led the way in 2022's beauty trends