Though funding has tumbled from a dizzying high of 2021, there is enough dry powder for deserving startups 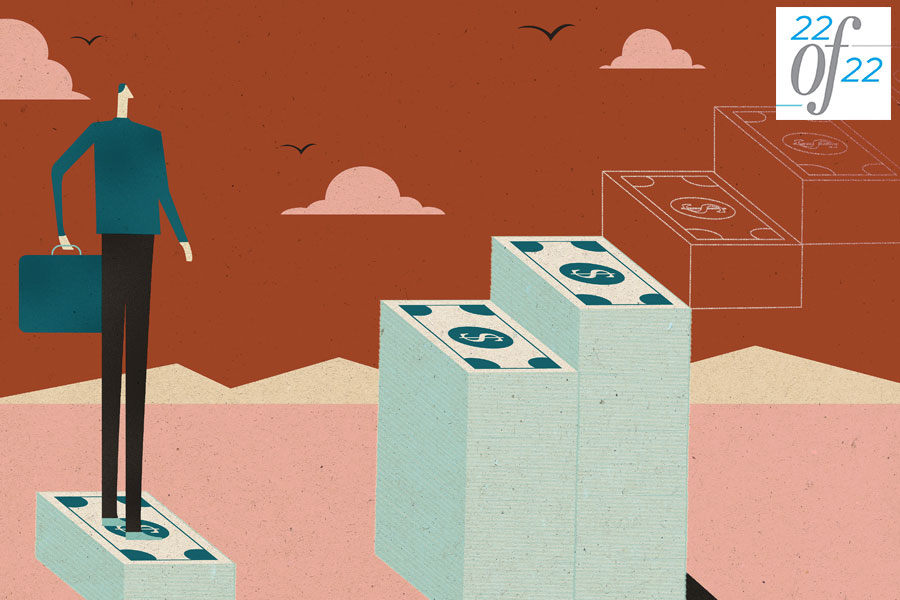 A funding winter is here, and it is for real. From $4.7 billion raised in January 2022, funding has dipped to some $1.3 billion in November. Illustration: Chaitanya Surpur

The maths is simple: $25 billion raised in 11 months of this year versus $41 billion mopped up in the 12 months of last year. In all likelihood, 2022 will fall woefully short of the staggering funding mark that the Indian startup ecosystem witnessed in 2021. Had it not been for three SaaS startups— Icertis, Amagi, and Contentstack collectively scooped up $340 million in November—the overall funding for November would have not even touched a billion-dollar mark! In fact, July was the lowest funding month this year when the numbers dipped to $870 million.

The message is clear. A funding winter is here, and it is for real. From $4.7 billion raised in January 2022, funding has dipped to some $1.3 billion in November, according to data compiled by Entrackr. Another metric to highlight the frosty season is to have a look at how many startups stormed into the unicorn stable. While in the first quarter of this year—January to March—India got 13 unicorns, the numbers dipped to four in the third quarter (July-September). Over the next two months—October and November—there were none!
The blockbuster of last year has turned out to be the biggest flop of 2022. Funding in edtech reportedly crashed by nearly 45 percent to $2.2 billion in the nine months to September. From $1.4 billion raised in Q1 of this year, it plunged to $142 million in Q3. All the big edtech players such as Byju’s and Unacademy are gasping for breath.

The writing is on the wall. The winter will be bitter, prolonged, and parsimonious venture capitalists (VCs) will stay close-fisted. Though dollars will continue to flow over the next few months for early-stage startups, their growth-stage counterparts will have to contend with crumbs. “The next six to nine months will be hyper critical for startups,” reckons Namit Chugh, investment lead at W Health Ventures, a Boston-based VC firm.
The forecast is gloomy. There are already signals of a US Fed rate hike to 5.5 percent compared to the current 3.75 to 4 percent by mid next year, maintains Chugh. What this means is it might lead to further currency depreciation, making investing in India unattractive. “Investors are adopting caution and negotiating on valuations till the storm settles down,” he underlines.
Also read: Fall in winter: How CFOs became the fall guys
What does a severe winter signal for startups? The biggest takeaway is cash conservation. This is the time to build a fundamentally strong business, focus on unit economics and extend the runway to 18 to 24 months. “All of them are intertwined,” avers Chugh. What it also means is more consolidation in terms of mergers and acquisitions, and unfortunately more layoffs.

There is hope and some warmth, though. The strong trend in terms of launch of VC funds will continue to hold its ground. In November, seven funds, including Quona Capital, Kae Capital, Transition VC, Yatra Angel Network, and Pi Ventures announced their launch, according to Entrackr. The fact that early-stage funding has managed to grow also sends a positive signal to entrepreneurs. “We believe that India is well-positioned to work through these trying times,” reckons Shyam Menon, co-founder of Bharat Innovation Fund. Most VC funds operating in the country, he maintains, are well-capitalised and will continue to look for high-quality opportunities. The overheated sectors in terms of valuations will definitely see a reset. “We are cautiously optimistic,” he says.
There is enough dry powder as well. The companies with a predictable business model and clear path to profitability are being preferred by investors. “The decision to invest in such companies is not impacted much by the funding winter,” says Prashant Narang, co-founder of Agility Ventures, an angel investment network. Good founders building sustainable companies will always attract capital, he underlines. “Such startups will find ample sunshine and warmth in the winter.”