At the 2020 Tokyo Olympics, Katariya became the first woman to score a hat-trick at the Games, and the Indian women's hockey team clinched a historical fourth place finish 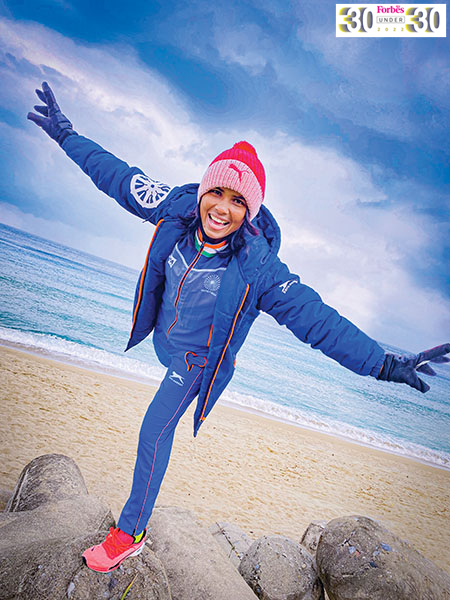 Vandana Katariya is known to be a fighter

India won a record seven medals at the 2020-21 Olympics that saw many individual milestones—javelin thrower Neeraj Chopra’s gold, and wrestler Ravi Kumar Dahiya and weightlifter Mirabai Chanu’s silvers, among others. Another performance that was keenly watched and celebrated was that of the women’s hockey team that finished fourth.

Despite missing a podium finish by a whisker, it was seen as a victory in defeat for a team that had finished last in the 2016 Rio Games. And one of the star performers of the team was forward Vandana Katariya, who scored a hat-trick against South Africa. Covid-19 delayed the Olympics, but the 29-year-old remained unfazed. She kept her focus intact on winning the first match against The Netherlands on July 24, 2021, and subsequently the other games.

“We were in Bengaluru [at the Sports Authority of India facility] when the pandemic began. We would quarantine if anyone tested positive. Our trainers gave us workouts to be followed in our rooms. Watching all the girls train gave us the confidence of reaching the semi-finals at Tokyo,” says Katariya.

Katariya comes from a small village, Roshnabad in Uttarakhand’s Haridwar district. She picked up the game after watching her older sister Rina play. Her struggle began with the lack of resources—the occasional absence of a hockey stick, one pair of shoes shared among three siblings. But Katariya’s father Nahar Singh encouraged her to keep going. She made her debut for India in 2010. Tragedy struck just before the 2021 Olympics. Her father passed way three months before the tournament.

India’s campaign was off to a rocky start during the pool matches. Having defeated only one team, India needed to defeat South Africa to stay in the competition. “After we lost the match against England, our coach [Sjoerd Marijne] was angry with our poor performance. He took our class for 2 hours. Then he motivated us, and even showed us a motivational film that changed the team’s outlook,” says Katariya. “We decided to start afresh.” Thereafter, Katariya became the first Indian woman to score a hat-trick at the Olympics.