IT services company Mindtree's growth can be attributed to its focus on core areas and large clients, as well as the leadership style of Krishnakumar Natarajan 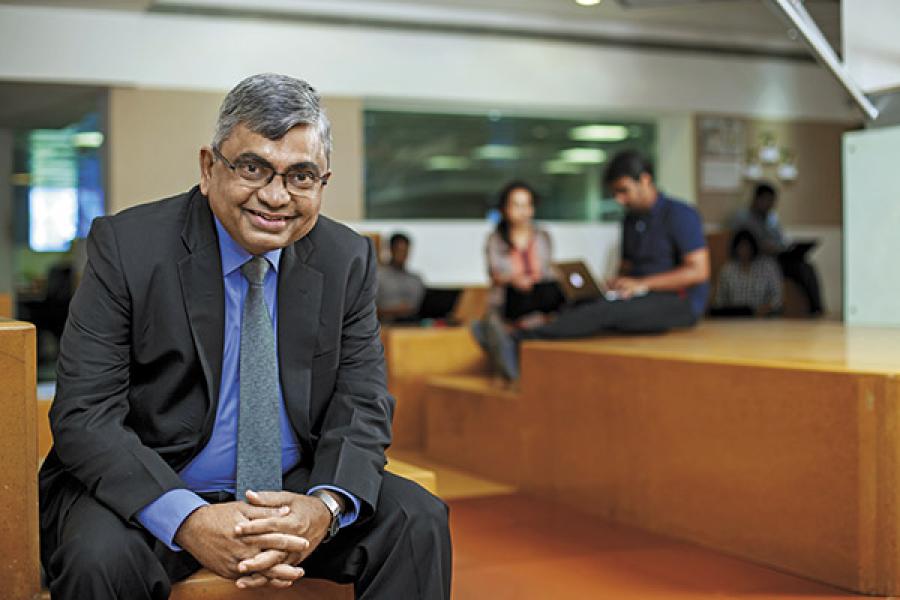 Prashant Mehra, associate vice president, social inclusion, at IT services firm Mindtree, has known his executive chairman Krishnakumar Natarajan for close to two decades now. Natarajan is someone with whom he can share his deepest concerns and his silliest ideas without any inhibitions.

“I first met him [Natarajan] in 1997 when I joined Wipro as a software engineer in his team. A few months later, I was asked to go to New York on an assignment. I had been married for just a year and my wife was working with IBM. I didn’t want to disrupt her career [by taking her with me]. Then he [Natarajan] struck a deal: I could go for just six months. But my wife’s birthday was within that period, so he told me I could come back one week before her birthday,” recalls Mehra (43).

Although the project was on track, Mehra was not able to set up a team to hand over his responsibilities before returning. “But he [Natarajan] kept his word. I came back a week before my wife’s birthday. At some level, that was the beginning of a relationship that still continues. He is an extremely trustworthy and reliable person,” says Mehra, who joined Natarajan in 1999 when he co-founded Mindtree.

In 17 years of Mindtree’s existence, Natarajan (58), popularly known as KK, has played a crucial role in building an organisational culture based on trust and respect. Those familiar with the roots of the $715-million software services company would insist that this approach towards colleagues, clients and investors is what has brought the company this far.

“The best way to judge a company is by its performance,” says VG Siddhartha, chairman and managing director of Coffee Day Enterprises Limited (CDEL). “Since 2011, the stock price of Mindtree has gone up by more than five times, with KK at the helm during that period. It depends on the quality of the leadership and the team.” Siddhartha was the first venture capitalist (VC) to put in a $2-million seed fund in Mindtree in 1999 when the IT services company was founded. Siddhartha, along with his two entities (CDEL and Coffee Day Trading Ltd), is the single-largest shareholder in the company.

Natarajan, along with nine co-founders from Wipro, Lucent Technologies and Cambridge Technology Partners, had started Mindtree as one of India’s first VC-backed IT services companies and has helped build it from ground up; he took over as CEO and managing director in April 2008, and became executive chairman on April 1 this year.

As CEO and MD, Natarajan initiated some key strategic course corrections, and fuelled growth by venturing into newer businesses in the highly-commoditised software-services industry. The mid-cap IT company has grown at a compound annual growth rate (CAGR) of 16.7 percent in the last five years, ahead of the industry’s 12.6 percent. Mindtree has also enhanced value for its shareholders: On March 7, 2007, the day it was listed, Mindtree’s shares were trading at Rs 155; they have gone up to Rs 653 as of March 31, 2016, a growth of 321 percent.

Many would agree that Natarajan has been a cornerstone of this growth. “In 17 years, it has given more than 30 percent returns on my investments,” says Siddhartha. “After KK took over as CEO, he has done a commendable job. He knows how to motivate his team and achieve targets.” 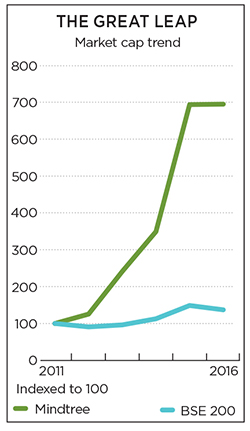 Exiting a wrong bet
The Bengaluru-based company witnessed rapid growth between 1999 and 2005, crossing $100 million in revenue, followed by a successful initial public offering (IPO) in 2007. But when the global markets tanked in 2008, Mindtree saw its growth slowing down. Seeing an opportunity in the mobile handset business, it acquired the India R&D unit of Kyocera Wireless (a software engineering company, especially for mobile devices) in 2009, to make smartphones. But as higher capital requirement began to eat into profits, Mindtree exited the business in 2010, and suffered a loss of $15 million in FY11.

It wasn’t just a monetary blow: The company also saw the exit of then executive chairman and co-founder Ashok Soota, and about 35 percent of its senior executives in the ranks of vice president and above.

Natarajan’s mind keeps going back to the words of a board member: “In growing the business, you should make big bets, but not bet the company.” Natarajan has no qualms in admitting that the mobile business wasn’t the right call. “I realised that there is no point trying to hide something under the carpet. Honesty and over-communicating at that time helped. There will be some non-believers in the organisation, let them move on. If we had tried to hold them, it would have created negative energy in the system.”

Repositioning
While Mindtree was trying to come out of what Natarajan calls “a self-inflicted wound”, there was a clear need to reposition itself, and to differentiate its services in a highly competitive market.

In the later part of 2010, Siegel+Gale, a US-based strategic branding firm, was brought on board to spearhead the repositioning exercise. Management consulting major Bain & Company was also roped in to provide a roadmap.

Natarajan was clear about verticalisation of services, and not trying to become everything to everybody. Based on Bain & Company’s suggestion, in late 2011, Mindtree decided to focus on four key business segments—banking, financial services and insurance (BFSI), high-tech businesses (semi-conductors, consumer electronics and gaming), retail and consumer packaged goods, and travel and hospitality. “Despite operating in an industry where service offerings and clients are more or less similar, Mindtree has managed to create its own position, while competing with larger players such as TCS, Infosys and Wipro,” says Som Mittal, former chairman and president, Nasscom. “He [Natarajan] had a strong conviction that, despite all the negative cycles, the company can move on. And he has done that effortlessly, without dismissing the problems.”

Client mining strategy
With a focus on specific business verticals, Natarajan made a conscious effort to re-evaluate Mindtree’s customer base, as Bain & Company had recommended. It cut down on its number of clients to focus on building long-lasting, deep-engagement relationships with major customers.

The distillation helped. “Mindtree’s growth from its top accounts has been one of the best in the industry. More importantly, growth at its top client has been more than two times the company’s revenue growth over the past two years,” says an April 2016 report by IIFL Research.

Focussing on large clients and cross-selling services to increase revenues from each client is a strategy that mid-size IT firms in India have been adopting in the recent past. Mindtree could be called a pioneer of sorts in this field: In 2010, the company’s top 10 clients accounted for 36 percent of its total business; in the last four years, this has risen to 46 percent. At present, it has six $25-million clients and 15 customers in the $10-million category.

Focus on digital business
As clients began to move towards newer technologies such as cloud, mobility and analytics, thus transforming their business platforms, Natarajan realised that offering digital services to clients would be the way forward. “Digital will not just be restricted to front-end business; customers are also changing their back-end support, which is the enterprise resource planning [ERP] system,” says Natarajan. ERP software integrates data across departments, such as product planning, purchase, sales and manufacturing.

Rostow Ravanan, CEO and MD of Mindtree, credits Natarajan for seeding and growing the idea. Today, Mindtree’s key clients in the digital space include Microsoft, Unilever and P&G. The digital business, started in 2013-14, currently comprises about 35 percent of Mindtree’s total revenue. “Digital is a major benefit to our topline and helped create a differentiator,” says Ravanan.

Shopping smart
To fuel its digital business, in the last one year, Mindtree has made three acquisitions: UK-based Bluefin Solutions, which specialises in German IT firm SAP’s business software HANA; US-based Relational Solutions Inc, an analytics provider, primarily for consumer packaged goods; and US-based Magnet 360, a Salesforce consulting partner with clients such as Nike, Honeywell and Cargill. In 2008, Mindtree had acquired Bengaluru-based Aztecsoft, which had two key businesses: Software testing and software product engineering. This acquisition had helped Mindtree ramp up its product engineering business and tap into Microsoft, a key client of Aztecsoft. Today, Microsoft is one of Mindtree’s top clients.

Most of Mindtree’s acquisitions have paid off. “While many look at M&As as a strategy to bulk up revenue, I feel an emotive connect with the founding team of the other company; aligning with their key objectives is crucial,” says Natarajan. “Acquisition is not about shopping and throwing money.”

Collaborative approach
Growing up in Chennai, where his father was a doctor in the Indian Railways (stationed in Perambur, then the divisional headquarters of the medical department), Natarajan had a modest middle-class upbringing.

“The advantage of growing up in a railway colony was that I had many friends,” he recalls. “An infrastructure set-up like the Indian Railways gives you facilities where you can learn outside your school environment. What that subtly brings in is the ability to work with a diverse group of people.”

Even clients have noticed Natarajan’s collaborative spirit and team-player attitude. Pramod Varma, chief architect and technology advisor, UIDAI, remembers his first meeting with him: “During the half-a-day presentation, where Mindtree was presenting its proposal for the Aadhaar project, KK orchestrated his team as a leader, but never interfered. He let his team speak. He only intervened when it required a commitment from the organisation.”

In 2010, Mindtree bagged the three-year application development and maintenance services contract of the government’s Aadhaar project, one of its key wins.

People-oriented approach
Natarajan’s genuineness, humility and inclusiveness are regarded as his hallmarks. “His way of functioning is very democratic. He takes everybody along and makes sure that the decision is consensus-driven,” says Ramakrishnan Chandrasekaran, executive vice chairman, Cognizant India, who has known Natarajan for 15 years and has worked closely with him at Nasscom. Natarajan’s colleagues agree. “In the last five years, I have closely worked with him in multiple areas of human resource,” says Vidya Santhanam, director, organisational and leadership development, Mindtree. “I find his involvement genuine in leadership development, which is core for any large organisation.”

In 2014, Mindtree partnered with US-based Korn Ferry, one of the world’s largest advisory firms, and developed a five-level programme to build a strong leadership pipeline. “I personally know a lot of people who work at Mindtree. They feel good being part of the company. It is an extremely employee-friendly organisation,” says Chandrasekaran.

For the year ended March 2016, Mindtree’s attrition rate stood at 15.7 percent, one of the lowest in the industry. The average attrition rate in the IT industry varied between 16 and 17 percent during the same period.