As Mumbai's luxury mall Palladium celebrates 10 years, its director Gayatri Ruia talks about keeping up with its ever-evolving customer, and the role of a mall in the age of ecommerce 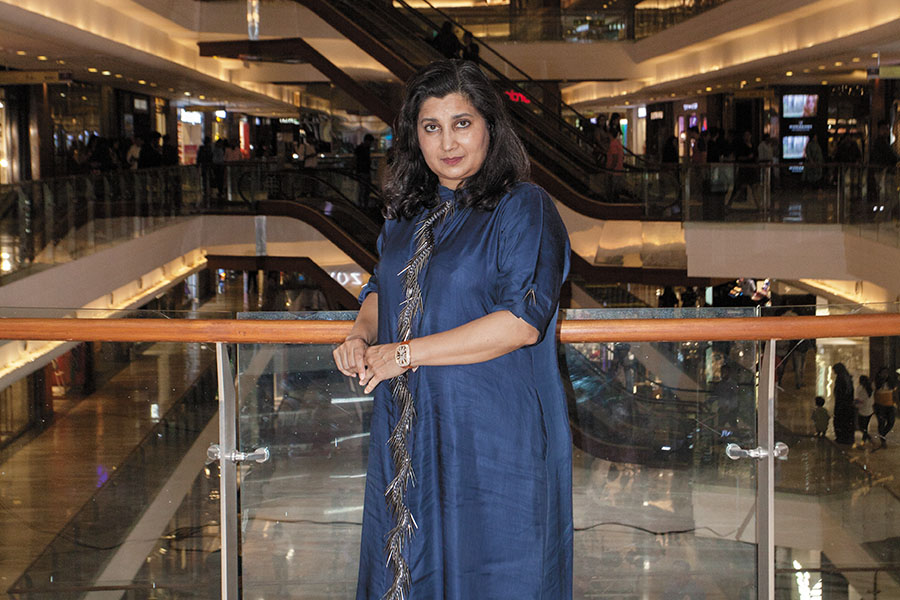 At a time when words like ‘Jimmy Choo’ and ‘Ermenegildo Zegna’ were just beginning to find a place in Indian vocabularies, business-couple Gayatri and Atul Ruia placed a bet. In central Mumbai’s Lower Parel, they had already turned a defunct mill into a high-street shopping and entertainment destination, including a bowling alley, a McDonald’s and a few ice-cream parlours. The Indian consumer was rapidly demanding more, and the Ruias decided to build Palladium, a luxury mall, as an extension to the existing Phoenix Mills campus.

“When we created Palladium, we did not want to create a hallowed temple of luxury that would go unattended,” says Gayatri Ruia. “The challenge was to create a beautiful product and at the same time not make it so exclusive that people would not be comfortable in it.”

As Palladium celebrates its 10th anniversary, Gayatri Ruia, director of Palladium, speaks to Forbes India about how the luxury market has evolved with its consumers, and the challenges of running a mall in the age of ecommerce. Edited excerpts:

Q Ten years ago, Phoenix Mills had become a destination of sorts. What was the idea behind carving out Palladium as a luxury mall then, with its own separate identity?
Yes, Phoenix Mills took shape 10 years ago and became quite popular. My yoga teacher, who lived pretty far away in Dahisar, once told me he was going to come here on Sunday to buy a single CD, with his whole family. I asked him why he would be travel so far to buy just a CD… and he said it would be an ‘outing’ for the family. That’s when the penny dropped for me. I clearly remember this moment because it made me realise what we had built.

By this time, quite a few shops had come up, and we had a small luxury area on the other side.

We were adding restaurants in an ad-hoc fashion. Through this progression, there was this plot of land [on which Palladium and five-star hotel St Regis stand] that was earmarked for more retail and a hotel. At that time, we started leasing as we knew best, to more high street brands. Then we paused and said that this destination is ready for something more. So we returned those cheques and opted to make it a luxury mall.

By then, we were also clear that the hotel we were building would be something special. Luxury hotel operators were interested. And hence, Palladium was born.

Q Your target audience is one that travels abroad and can buy luxury items there. Is that a problem?
Around 2006-2007 when Palladium was made, it was a fairly giddy time for the Indian economy. Experts were throwing all these projections about how the luxury market in India was growing exponentially. We were hearing stories of ultra-luxury brands being able to open as many as 30 stores across China. The numbers were mind-boggling. We felt that if brands could have so many stores in China, they could manage one in India, maybe even just three in 10 years. We were extrapolating data from very little that we had, and it was exciting people enough to lay big bets. It was all falling in place perfectly on paper.

Palladium had a timeless theme and an art deco inspiration; in fact, the flooring is a copy of what we have at our 100-year-old home in Malabar Hill. We were happy with the way it was looking, but my husband, who is, intuitively perhaps, better at these things than I am, said that while all of it is seeming great, do you realise that pure luxury is a bubble? We argued a lot—it was my baby, and we tried hard to lease it as pure luxury, and of course, there were challenges.

Because of our FDI [foreign direct investment] norms, a lot of luxury brands couldn’t come in directly. Hopeful Indian partners were running out of steam and money. So a few years were a real game of musical chairs.

Then another realisation came to us, about what Mumbai’s evolving, thinking customer wants. Yes, luxury was aspirational, but also boring for a lot of people.

We looked at a mall in Singapore called Paragon as our prototype; here, Prada stands cheek-and-jowl with an ELC kids’ toy store. You understand that even an affluent or aspirational customer, on a given day, needs a variety of things and experiences. You can’t make it very linear. That understanding of our customer and location is what led us to create Palladium the way you see it now—a luxury mall, with a sprinkling of popular, upmarket high street fashion. Burberry on one side, and Zara on the other.

Q Over the past few years, you’ve introduced a few Indian luxury brand stores too. Is this a conscious choice?
We curate, and yes, there are some stores we seek out. Nicobar, for instance, fit well because we needed a home décor brand and we like its edgy design. But Palladium is a tiny mall, like a little jewellery box. So it has to be efficient; we force retailers to work with less than what they think they need. So we’ll pick and choose what we think the mall needs at the time.

However, Indian designers at a certain price point are doing good business, and the way in which buyers are seeking out Indian brands is also changing, with crossover fashion trends.

While we can’t always accommodate the brands we want, there is a clear demand for Indian designers, and they are projecting good sales, and we’re aware of that.

Q Palladium is one of the few premium retail spaces in the country. Why is that and what are the challenges in this space?
I think the value attributed to real estate is disproportionately higher than the value attributed to other capital commodities in our country. It says something about the billions of people who are constantly aspiring to move to cities. Quality retail space is not just about land cost, which is high, but the cost of building, of permissions—the entry barriers are often insurmountable. And then to finally be able to make decent returns on them before you go under is also difficult. This is true for any large infrastructure project, but with a shopping mall, if you don’t have your pulse on the customer, there are too many external factors that your success could depend on.

Q You opened a Palladium in Chennai, an unlikely market for luxury, in 2018. Why?
Chennai is a mature consumer market. For us, we knew Delhi had a lot of such spaces already and we wouldn’t have the first-mover advantage, and we haven’t found a good enough location there for a marquee property. Kolkata is something we’re actively considering. The Chennai mall was the first in the country to have this intense art experience to it—contemporary, high-brow art. While your regular Chennai citizen may not come across as someone who enjoys modern Western art, traditionally, they are extremely cultured. They love their cinema, their textiles. We’ve had a great experience in Chennai, and it was the correct call for us. Certain segments—watches, for instance—do exceptionally well there.

Q In the age of ecommerce, what is the role of the mall?
We want to create experiences, but those that enhance sales. It’s been a learning for us. Ecommerce has a great practicality to it. As far as we see it, it only increases the overall consumption in the retail business. Malls may evolve in how they sell and what they sell, but they’re still going to be important spaces that people come to.

Even internationally, a lot of conventional malls are shutting; bookstores are almost obsolete. At the same time, these new hybrid entertainment and F&B-led retail spaces are suddenly emerging.

Q How would you say India’s luxury market has evolved in the past decade?
The customer has become informed. The influencers have changed. It’s ephemeral, like a little flash in the pan. Trends change quickly, and we have to be cognisant of that. If we did 20-year leases earlier, we’re definitely not going to do that anymore. Particularly in this microcosm of Mumbai, and South Mumbai, our audience is probably more global than anywhere in the world.

We have a clear identity of who we are and what our culture is, but we’re comfortable crossing over to the West. It makes us great consumers. An evolved customer is a mega-consumer in that sense. It’s not just about money power, but how often you visit, what sort of experiences you demand from us. We have eight malls across the country, and 6 million square feet in retail; we’re adding another 4.9 million in three years, but Mumbai will always remain our pilot mall. What may work here today may be a bit futuristic for Chennai, but that too will get there in a year’s time.

Q What does the future of Palladium look like?
The future is looking exciting. We’re ready for a whole makeover of the Mumbai mall, and want to add a lot more edgy, international art. In the next year, you’re going to see a lot of exciting stuff happening there.

Tweets by @forbesindia
Is the luxury sector feeling the pinch?
Hypertension in Indians