Digital content creator TVF has big plans for the future

An IIT-graduate created a successful business by balancing method and madness. But Arunabh Kumar and his The Viral Fever now have to contend with competition from big production houses and boutique creative firms alike 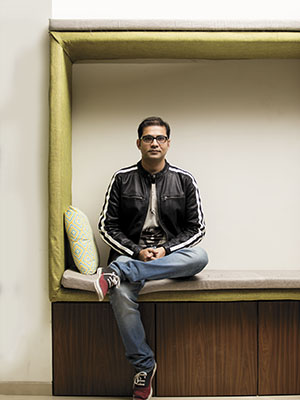 As a student back in 2004, Arunabh Kumar found the absence of Indian content on IMDb (Internet Movie Database) ratings disappointing. Like many others, Kumar, who was studying mechanical engineering at IIT-Kharagpur, would use IMDb’s Top 250 shows (TV and web) as a filter for what to watch. But there were never any Indian shows in the mix.

Kumar made a mental note to change things, and it took less than a decade for him to get there: Today, there are only two Indian shows in IMDb Top 250 shows, and both are from his online content creation company, The Viral Fever Media Labs, or TVF, which was founded in 2011: Pitchers (No. 22, entered in 2015) and Permanent Roommates (No. 174, entered in 2014). They are also the first YouTube shows to make it to this list, says Kumar.

“I observed that there seems to be a big population and demand for better and progressive content which nobody is catering to. So I thought why not try and make something for them,” says Kumar, 33, CEO of TVF Media Labs.

“I met Lee [Fixel, co-head of Tiger Global’s private equity and venture capital investing] in September last year. But it was important for us to figure out our drawing board. I did six months of homework before going ahead with the funding,” he says. The money will be used to improve their app, production process and create more content. This is the first external infusion of funds into TVF, which was bootstrapped by Kumar till this point. Their strategy was to first master the art of writing a good script, explains Kumar, and then get more cash to be able to make more than two shows in a year.

They seem to be heading in that direction. Season two of Permanent Roommates, in association with Ola, was launched on February 14. TVF also collaborated with global dating giant Tinder to create a branded content video Eat, Pray...Swipe | Tinder Qtiyapa! The video, published on January 31, has got more than 14 lakh views as on March 18. This is apart from shows like Barely Speaking with Arnub, Qtiyapa and Chai Sutta Chronicles.

TVF has 15 lakh subscribers, over 130 videos on its YouTube channel, and garners an average viewership of 12 lakh per video. The company has also created five divisions—TVF Branded Entertainment, TVF Production Labs, TVF Live, TVF TV Production and TVF ONE Online Network for Entertainment, which offer services like branded content for the internet, production services, live events, television shows and web series. To reach a wider audience, TVF launched its own app, TVF Play, which lets viewers watch all their content in mobile-friendly resolution.

This evolution, says Kumar, “is a simple case of good product-market fit”.

But it isn’t quite simple. The boy from Muzaffarpur, Bihar, has the world in his sights. Take, for instance, the recognition he received when he represented India at Google’s first ever Global Creators Summit and the fourth edition of Brandcast, both in New York in 2015, alongside stalwart organisations like Vice, Universal Studios and Buzzfeed. TVF was the only Indian company to be invited to the annual initiative, which discusses current trends in online content and identifies key drivers for growth.

“There is tremendous opportunity and there will be more and more co-opting synergies and partnerships between brands, creators and platforms,” says Neeraj Roy, managing director and chief executive officer at Hungama Digital Media Entertainment Pvt. Ltd, a digital services agency.

Media investment company Group M’s report titled This Year Next Year 2016 says digital advertising is expected to grow by 47.5 percent in 2016 to Rs 7,300 crore from Rs 4,950 crore last year. The boom in digital media will only help TVF as branded content, combined with an engaging storyline, will be the way forward for most brands this year, say experts from the advertising industry. And Kumar, who figured this out in 2011, seems to have had a headstart. “The change has happened and people need to catch up with it,” he says.

The genesis of TVF is embedded in Kumar’s love for storytelling. He found his way to it through a circuitous route. He interned with David, a subsidiary of advertising agency O&M, when he was at IIT. After graduating in 2006, he worked as a research consultant on a US Air Force Project from Mumbai. In the same year, he quit this job to work as an assistant director on Farah Khan’s Hindi film Om Shanti Om.