NBCC: Building India with solid and timely execution of projects

NBCC's stock has gone up 16-fold over the last five years. Reason: An overflowing order book and a relatively risk-free business model 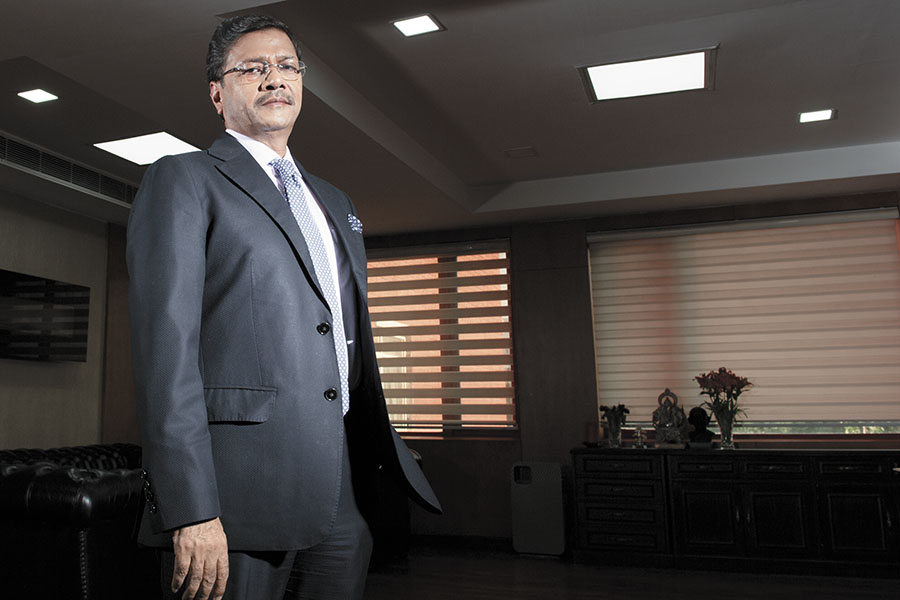 Anoop Kumar Mittal sorted out HR issues like promotions, perks and incentives within 100 days of taking over as the CMD of NBCC
Image: Amit Verma

In New Delhi’s East Kidwai Nagar the outline of a vast new project is taking shape. Spread across 86 acres, the dilapidated government residential colonies’ 2,444 houses have been torn down to be replaced with 4,608 modern homes over 33 high-rise towers of between six and 14 floors. In addition, there’s office space for sale, along with a banquet hall, a shopping centre and a secondary school.

While redevelopment projects are hardly new, what’s unique about this project is its scale—it has a project cost of ₹5,298 crore—as well as the fact that its implementation was awarded to NBCC Ltd, (earlier known as National Buildings Construction Corporation Ltd, with 75 percent government ownership) that has time and again demonstrated its ability to design and complete projects ahead of time.

The funding model is also optimal as the sale of commercial space coupled with a 30-year maintenance agreement is enough to pay for the project costs. This self-financing model is likely to be replicated for a host of government accommodation projects in the years to come. Already, NBCC has received government contracts to redevelop Sarojini Nagar, Nauroji Nagar and Netaji Nagar in Delhi.

With its strong execution track record (any delays are typically due to permissions not coming on time) NBCC, according to media reports, is also a front runner to take over the stalled Jaypee Group residential projects in Noida, just outside Delhi. Confirming this to Forbes India during an interview in his office in the capital, Anoop Kumar Mittal, chairman-cum-managing director of NBCC, says the company would be interested in taking over the projects and completing them once the financial modalities have been worked out. He indicated this was possible if the interested parties—the builder and the banks—were willing to take haircuts. Should this work out, it could open up a new revenue stream for the company, he points out, from the projects constructed.

Analysts who track the company are excited by the long growth runway ahead. The funding model adopted in the Kidwai Nagar project, NBCC’s largest, could become a template for other government redevelopment projects across India, they say. “Growth is not a problem for the company as it has a ₹80,000 crore order book. Lately though, permissions for some projects have been delayed and the company has to ensure they are expedited,” says Binod Modi, a senior research analyst at Reliance Securities.

In addition to the government’s housing-for-all initiative and its Smart Cities Mission, the “redevelopment of government colonies in Delhi is likely to generate significant orders for construction companies,” according to an Edelweiss report on the construction sector.

Simply put, NBCC is in a sweet spot. Its order book has swollen to ₹80,000 crore, which the company plans to execute in the next five years. Since its listing in March 2012, its stock has compounded at 77 percent a year taking its market capitalisation to ₹19,000 crore making it the top performing government-listed company in this period. During this time, its revenue rose 12.6 percent a year to ₹6,553 crore while profits went up to ₹354 crore—a growth of 13.25 percent a year.

Credit for the increase in its market cap is in no small measure attributed to Mittal, 57, who took over as CMD in March 2013. An NBCC lifer—he had a short stint with Shapoorji Pallonji after graduating from Thapar University —he has been with the company since 1982. “Upon taking over, I had a 100-day plan and knew exactly what needed to be changed. Systems had to be put in place,” he says.

Take the area of payments, for instance, where there was, and continues to be, significant scope for corruption. Mittal ensured that money had to be disbursed electronically. “Even writing of cheques was prohibited as the person has to come to collect the cheque and this could lead to corruption,” he says. Similarly, tenders were also put on an electronic platform.

Promotions was another trigger for angst among employees who would go years without getting promoted, thus seeing their careers stagnate. After taking over, Mittal has ensured that promotions are made every year. “Whether there is one promotion or hundred in a year, the list is put on the last day of September every year,” he says.

Perks were introduced as well. All employees were provided with mobile phones that are paid for by the company. Subsidised meals were included. These measures boosted employee morale and have ensured that the company has had very few vigilance inquiries over the years. 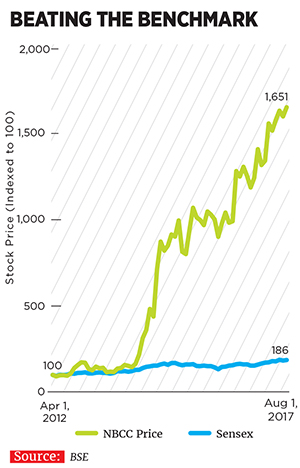 The lack of monetary incentives from the government continues to niggle, however. Especially given that NBCC is a company that performs. There has been no additional compensation for employees and nothing by way of stock options, both of which are now de rigueur in private companies.

For Mittal, this hasn’t come in the way of business. Human resources issues handled within the first 100 days of his tenure, he got down to boosting the order book. NBCC has three lines of business—project management consultancy (PMC), real estate and engineering, procurement and construction (EPC). PMC brings in over 90 percent of NBCC’s revenue and is expected to be the growth driver.

What is interesting is the way the PMC business operates. Once a contract is given, NBCC is responsible for the architecture, for preparing a financial plan for the project and then awarding it to a construction company like L&T, Shapoorji Pallonji or Nagarjuna Constructions. It is also responsible for timely completion with enough safeguards built in to account for delays on account of late permissions or force majeure.

These PMC contracts are worth 8-10 percent of the project value with the vast majority of it flowing to the bottom line after salaries, architect fees and office expenses are taken care of. It is a highly profitable business with the actual task of construction outsourced. This dramatically reduces the risk on the books of NBCC, transferring it to the contractor.

As NBCC has proved itself proficient in managing large projects, it has become the government’s agency of choice for outsourcing projects.

The other large government agency that takes care of these projects is the Central Public Works Department (CPWD) but NBCC’s execution has been faster.

There is also an additional legal wrinkle with the CPWD. While the NBCC can redevelop government property and sell additional real estate, CPWD, by law, cannot sell property. This makes NBCC the sole government agency that can redevelop projects for a profit. It has also upped the quality of the architects it works with and now invites applications from international architects to develop marquee projects like New Delhi’s Pragati Maidan.

On the residential front, NBCC has been mentioned by the Maharashtra government as a partner for redeveloping Dharavi in Mumbai but Mittal acknowledges that this business comes with significant challenges. “Clearing slum land is the biggest bottleneck,” he says. In a recent sign of how developers have come to respect the work NBCC does, Mittal lets on that he has received enquiries from private developers like Godrej Properties and Tata Housing.

Lastly, NBCC has also been made the land management agency for sick government companies like HMT, Hindustan Photo Films and ITI.

For now, Mittal, whose tenure comes to an end in March 2018, is sanguine about the continued growth of the comp

What about valuations? At March 2017 profits of ₹354 crore, the stock is trading at 54 times earnings. Other construction companies like Ahulwalia Contracts or NCC Ltd trade at far lower valuations. Clearly, the market has priced in a lot of future growth as well as the fact that NBCC has become the go-to agency for government contracts.

With its expanding order book, NBCC can expect a profit pool of ₹8,000-10,000 crore over the next five years or ₹2,000-2,500 crore a year, say analysts. And if the company is able to deliver, expect the market to re-rate the stock even further.