The Greece conundrum: All Greek to you? 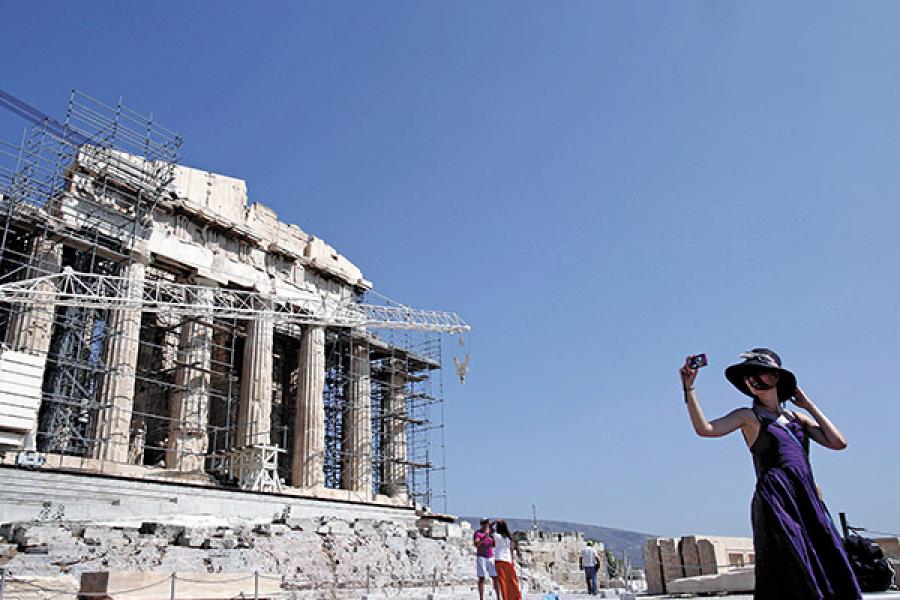 Image: John Kolesidis / Reuters
The Acropolis in Athens houses the famed Parthenon temple, which receives millions of tourists a year. Greece is banking on the tourism industry to pull it out of a six-year recession

1. The national animal of Greece is the phoenix, a mythological bird—only one of which exists at any given time—that rises from its own ashes after its death. Particularly inspiring for the country at the moment, given its collapsing economy.

2. In Greek mythology, Poseidon, god of the sea, and Athena, goddess of wisdom, were vying to be the presiding deity of Athens, the capital city. While Poseidon tried to win over the Athenians by gifting them water, Athena came up trumps with a gift that has since symbolised all things Greek: Olives.

3. The original Santa Claus, St Nicholas, was a Greek bishop born in 280 AD in Myra, a small town now in Turkey. A feisty defender of the church doctrine even during the ‘Great Persecution’, he became the patron saint of children and, over time and lore, shifted home to the North Pole (and adopted reindeer).

4. A Greek movie, Orestis Laskos’ Daphnis and Chloe (1931), featured the first nude scene in European cinema. The film is considered a masterpiece and left behind a legacy that eluded the director, who later made a series of slapstick comedies and period pieces.

5. One of the top tourism destinations in the world, Greece attracts nearly twice  as many tourists as its population. In 2014, the country with around 11 million people had over 20 million visitors. While Greece was banking on its tourism industry to pull it out from a six-year recession, the recent economic chaos might see the tourists change travel plans.

6. The father of the Pap smear test is a Greek doctor named George Papanicolaou. The test saved millions of lives with early detection of gynaecological malignancies, but failed to get Papanicolaou a Nobel. He was in the running in 1960 but lost out to transplantation immunity researchers.

7. In Greece, you wouldn’t want to raise your arm and wave with an open palm. What’s a friendly ‘hello’ in most parts of the world signifies the Greek version of the middle finger. Originating from the medieval practice of smearing ash on the face of criminals and parading them publicly, the moutza is now a symbolic stand—and is often accompanied by jibes like par’ta (‘take these’) or órse (‘there you go’).