What we've learned over the years is that the novice generally starts off with a less intimidating beverage maybe black coffee in a small size but over a year or so they begin to move up to a more complex beverage, a stronger beverage and a larger size 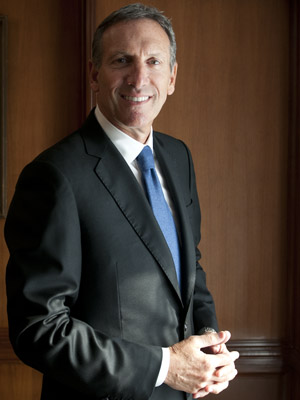 Ahead of the opening of Starbucks store in Mumbai’s tony Horniman Circle neighbourhood Howard Schultz spoke exclusively to Forbes India on the store, the coffee, its pricing and why they plan to go slow initially. Also read our story where Forbes India was the first to report on the location of Starbucks’ stores as well as the timing of the launch.

Q. Starbucks has set shop in several emerging markets. What are your thoughts on coffee chains already present in India?
The most encouraging thing is that the execution of the existing players is not up to the Starbucks’ standards in terms of the quality of the coffee and the experience. Yet. So the opportunity here is big for us unlike China. When we went to China 13 years ago we were pioneers and so we had to educate the consumer.

That’s not the case here. This gives us great confidence. We have to earn the respect of the Indian consumer and that of the market.

Q. What has your research on the Indian consumer shown?
We are not heavily dependent on consumer research. I am not a huge fan of it as a discipline. Having Tata’s as a partner and visiting coffee stores has given us all the insight we need. The amount of people who have been to Starbucks (overseas) and live in India is a very large number and the awareness of the brand is huge. The fact that Indians are drinking a lot of coffee whose quality according to us is not good gives us a lot of confidence. We’re doing something here that we have never done before – we’re sourcing and roasting Indian coffee.

We’re going to play that up in a big way. The core product is sourced and roasted here. It is going to be ultra fresh. We have taken a lot of effort to produce the perfect blend.

Q. India is a price sensitive market. How does Starbucks plan to address that?
We decided early on that we have to be highly accessible and approachable from a price value proposition. I’ll leave it at that.

You’ll see the pricing once we open the store. We recognize in the pricing architecture of opening a market and we did not want to price Starbucks in a manner that would be off-putting or intimidating. Some of that leverage comes from the fact that we are doing local sourcing but we would have not come to this market and used price as a barrier. We want to appeal to a broad base of people.

Q. How rapidly will you rolling out stores? Will it be a full throttle roll out?
We’re going to start here in Mumbai. We’ve got the Horniman Circle store opening first and then we have two stores that follow in the next week; one at the Taj Palace and the other at Oberoi Mall. From there we will see additional openings in office buildings, malls, high streets and airports. After Jan 1, 2013 we will move into Delhi.

We have locations there that we have identified and teams are working on those stores. We’re excited about the growth and we will accelerate but we’ll do it in a thoughtful way. From Mumbai we’ll look at major metros – Bangalore and then others to follow. Given the growth of the Indian coffee market that is growing at more than 25 percent a year we will capture our fair share but we’ll do it thoughtfully.

We’ve never built stores for the purpose of intercepting traffic. In my many visits to coffee stores in India it appears to me that they are intercepting traffic. The Starbucks stores are built in many different ways – the quality of the coffee, the quality of the people, the ‘third place’, the sense of design and community and the non-verbal cues that exist. All the stores will have a sense of style and elegance.

Q. Who has designed the Horniman Circle store?
Starbucks designers. The brief was to create a space where a novice would know that you’re in a Starbucks store but it has to be through a lens of being as respectful and possible to the Indian culture. I was getting photos every week but the truth is nothing prepared me for what I saw yesterday. I stopped in my track. Our designers worked with a lot of local craftsmen. Everything – the artifacts etc - is made here.

Q. Indian coffee chains have found that food contributes to a high percentage of revenue. How is Starbucks going about tapping that opportunity?
To Tata’s credit they early on were very interested in ensuring that they bring the capability of Tata and Taj to the Starbucks store both in terms of the infrastructure and in their understanding of the Indian preference in terms of food taste. So we had a tasting yesterday of all the food and my wife was here and she said why can’t we bring this food to Seattle! The quality of the food and the freshness and the mix of products will give us a great capability in multiple day parts. The thing about this store that will surprise people is that this store will be a major evening destination. And that is not the case with a majority of Starbucks stores. This store might be as busy at night as it is during the day.

Q. When you look at the Chinese market their average per cup prices are double that of India. How have you tweaked pricing for the Indian market?
For us what we want to do is to be priced in a way that will attract our consumers into our stores. And so you’ll see pricing that reflects the experience. When you go into our store today you’ll be amazed at how we have been able to balance that. All cup sizes are available and we have a short eight ounce size that is available to anyone who wants it. What we’ve learned over the years is that the novice generally starts off with a less intimidating beverage – maybe black coffee – in a small size but over a year or so they begin to move up to a more complex beverage, a stronger beverage and a larger size.

Q. How has the joint venture with Tata Global Beverages progressed? How does decision making work?
Lets rewind the clock a bit. When we were here last the primary reason why we were talking to and meeting all prospective partners. Because of the reputation of the company there was quite a bit of interest. We met with several companies that had infrastructure and capabilities but when we met Ratan Tata and (R.K.) Krishnakumar it was clear that both the humanity of the company and the scale and reputation of the Tata’s and what they could bring to us… there was a clear distinction in our mind that they were the company for us. Even though it has taken a long time for us to get here it was never about how fast we would come, how many stores we’d have, we had to get the foundation right.

Since that time we have brought many of Tata’s people to Seattle. It is something we have done throughout the world when we have selected partners – we put them through a significant immersion, which looks at the ethos of the company, the culture of the company, the education of the coffee, all the things that we do coupled with the business acumen of how to build the Starbucks business.

Q. From past experience, joint ventures that are board managed tend to slow down decision making? Are there any concerns on that front?
We recognize that the size of the prize in India is quite significant.

But you also have to understand how we are approaching the market. We have been very disciplined in ensuring the fact that when we open the first store we open it in a way that will create distinction, differentiation and separation in the marketplace from minute one. I have toured the entire country and I’ve looked at all these coffee stores. They are not in our business. They are selling a different beverage and a different experience. I think that when you walk into the store what you will see is that after looking at all the real estate we have picked an iconic site that gives us the ability in a large store to really create the Starbucks experience. What we have done is that we have integrated the Starbucks experience into the Indian culture.

Everyone who has seen the store over the last 48 hours have been spellbound, speechless. Not to mention the proof of all of this is in the cup – the quality of the coffee, the training, the artistic interpretation of how the store is going to work is a wonderful expression of the art of being a great merchant. We’ve never opened a store like this anywhere else in the world. I think we’re going to have a problem with crowd control. The answer to the question is there will be no problem in terms of speed of decision making. However, at the end of the day we are not going to end up with more stores than the existing local players. We recognize that the size of the opportunity here is thousands of stores.

Tweets by @forbes_india
Why Business IT Innovation is so Difficult
Are You A Star Performer?