A wealth of notions

Most of India's business elite pull out all stops to create value. Will the supertax help them bring about reforms? 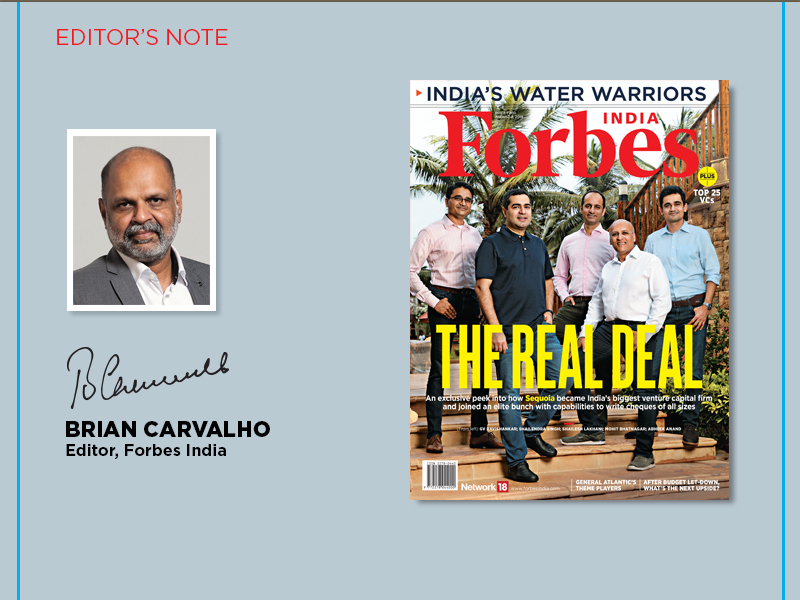 This issue of Forbes India you have in your hands tells a tale of two Indias. Our cover story is on the eager beavers in pinstripes in urban financial hubs who create value by betting on innovators. They are the venture capitalists (VCs) and private equity (PE) mavens who have a key role to play in India’s economic development by facilitating finance for small and medium enterprises.

Our cover package on the Indian VC/PE space, anchored by Sayan Chakraborty, delves into the journey of these financing firms, from seed-funding to late-stage. The cover story is an exclusive peek into the Indian arm of the 47-year-old Sequoia, the American VC firm that had a role in building storied brands like Apple, Google and WhatsApp. The Indian portfolio is impressive, too, with brands like Byju’s and Café Coffee Day. As Chakraborty points out: “Sequoia’s strategy is to invest in early-stage companies that use technology to transform industries and partner with the founders for at least five to 10 years.” On the PE side, Pooja Sarkar takes a look at another reclusive firm, General Atlantic, which will soon be deploying a fifth of its global pool of capital in India.

Our other package is on another India. Of people that don’t have access to what you and I take for granted: Water. A 2018 report titled ‘The Water Gap’ has India topping the list of countries with least access to water close to home; the number stands at 163 million, or 12.5 percent of the population. The good news: India is also the second most improved country after China, with some 300 million accessing water since 2000. Divya Shekhar, Naini Thaker and Namrata Sahoo travelled to water-starved regions to report on how local communities have embraced a clutch of traditional solutions to turn water-positive.

Finance Minister Nirmala Sitharaman summed up the extremes of India in a few lines of her budget speech with her income tax proposals. Those earning up to ₹5 lakh ($7,300) annually are exempt from income tax, she pointed out. Keep in mind that 57 percent of regular Indian employees earn ₹1.2 lakh (roughly $1,750) or less per year, according to a 2018 report by the Azim Premji University called ‘State of Working India’.

Then she swung to the other end: “In view of rising income levels, those in the highest income brackets need to contribute more to the nation’s development.” The “more”, of course, is a supertax on the superrich, which economists and stockmarket folk were quick to call out as, what else but, bad economics. They may not be wrong. Yet, few mentioned a word that’s the bane of India: Inequality. The 2016 Credit Suisse ‘Global Wealth Report’ pointed out that India’s richest 1 percent owned 58 percent of wealth, one of the world’s starkest gaps; and it reckoned that India’s dollar millionaire population (178,000 in 2016) would expand more quickly than any other country’s bar China (source: James Crabtree’s The Billionaire Raj).

Most of India’s business elite pull out all stops to create value. They take home a pretty package for their efforts, and nobody grudges them that. Yet, the higher tax they pay isn’t going to make a dent in the way they live, but, the way the government sees it, will go some way in social reform—like providing access to housing, toilets, cooking fuel, health care, education and, yes, water. If you believe in your government and its model for development—of all Indians—surely that’s not a big price to pay?