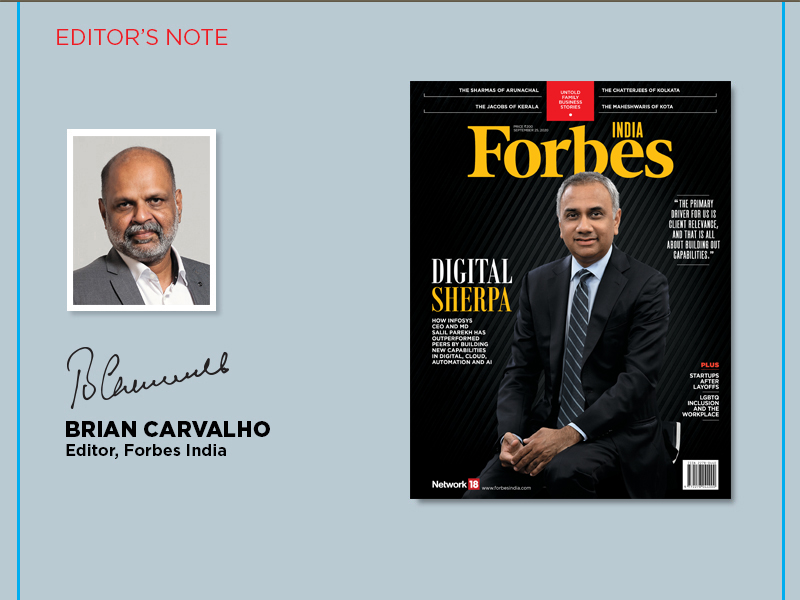 Salil Parekh took charge as CEO of Infosys on January 2, 2018. The year that unfolded proved to be eventful, as a string of top-level exits followed in the wake of Parekh’s appointment. Some 20 months down the line, Parekh, along with CFO Nilanjan Roy, duly found himself in the crosshairs of what’s proven to be the scourge of the Bengaluru-headquartered IT services giant in recent years: Accusations of unethical practices hurled by an anonymous group of employees in an October 2019 complaint. The whistle had been blown, yet again.

An internal audit committee did give Parekh a clean chit in a few months; and, by March, Infosys said that the US Securities and Exchange Commission had wound up its investigation and further action wasn’t likely.

That storm had passed, only for a hurricane to take its place: Covid-19 and the resultant lockdowns. However, even as much of the world hunkers down, the pandemic is proving a good time for Parekh to tom-tom his achievements.

Months after picking up the reins, he unveiled his ‘Navigate Your Next Strategy’, a three-year roadmap with four pillars: Digital, artificial intelligence and automation, reskilling and localisation in key overseas markets. The main objective? To win back (foreign) investor confidence after a year-long boardroom broil that culminated in the exit of Infosys’s first professional CEO, Vishal Sikka, in 2017.

Two-and-a-half years down the line, the results are beginning to show. Company spokespersons say Infoys has outperformed its top-tier peers for the fifth straight quarter (April to June) on revenue growth. That it is offering revenue guidance, they add, is a display of confidence in times of uncertainty; and that the performance in the past five quarters is a sign of the resilience of the strategy, operating model and Infosys’s relationships with clients.

This fortnight’s cover story, penned by Technology Editor Harichandan Arakali after meeting with the Infosys top brass, including Parekh, is about how the IT services major has upped its game as an essential supplier to the world’s largest corporations. “The biggest opportunity for Infosys is the huge emerging market for modernisation after giving clients the confidence that they can dramatically improve their IT and business process functions with the use of digital technologies,” says Arakali.

A potential worry from the US for Parekh—and indeed much of India’s IT services wagon—is the recent rash of lawsuits that accuse some top Indian vendors of being racially biased. A section of analysts expects more lawsuits to emerge, which may cost time and money (in settlements).

The other worry, of course, is the prospect of internal conflicts once again rearing their head, which one analyst reckons is Infosys’s biggest weakness. To his credit, though, Parekh has steadied the ship, allowing the company to be focussed on its customers.

From a company on which its founders have left an indelible mark, let’s move to those where the family has attempted to do something similar. India is estimated to have a little over 100 listed family-owned corporations that contribute to roughly a fourth of the country’s gross domestic product (GDP). There’s another massive universe of thousands of family-owned (and run) businesses that consultants reckon account for another half of India’s GDP. Forbes India decided to shine a light on a clutch of such businesses, most of which you would have heard little about. From United Brothers in Arunanchal Pradesh to Anna-Kitex of Kerala, Forbes India’s writers have a veritable treasure chest of stories hitherto untold.

Tweets by @forbes_india
Cover story: Salil Parekh's biggest challenge, up ahead
We need to be better positioned for complex digital journeys: Salil Parekh