Esports, streaming, to fantasy gaming: Inside our sports tech special

In this fortnight's special package on sports tech, we look at the various segments that make up this rapidly growing new-age sector: Casual gaming, Web3, NFT and blockchain-based gaming, esports, sports streaming, sports content and commerce, sporting, experiences platforms. And there's the biggest and perhaps most controversial piece of the pie: Fantasy sports 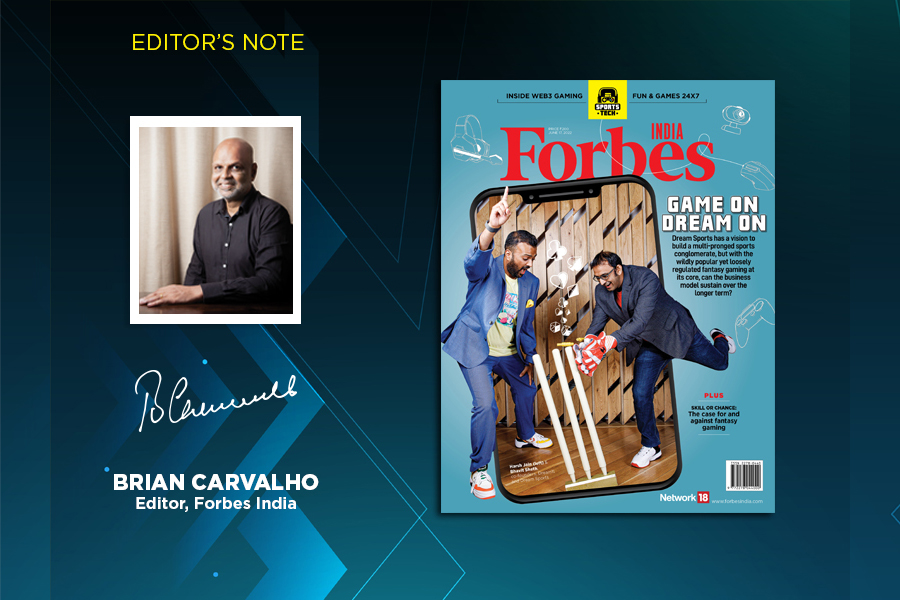 By the time you read this, some of the biggest global sporting competitions would have wound down after mostly nail-biting finales—the Premier League, the UEFA Champions League, the French Open, and the one that matters most at home, the Indian Premier League. The best-of-seven NBA final series would have commenced, Wimbledon awaits us in a fortnight, then the Women’s Hockey World Cup. The baseball World Series follows later in October, with the year ending in style in Qatar with the FIFA World Cup.

Sports aficionados will identify with most of the tournaments mentioned, perhaps with one exception: Baseball. It may come as a surprise, but not to those who follow it—or play it online as a ‘fantasy sport’.

In this fortnight’s special package on sports tech, Forbes India looks at the various segments that make up this rapidly growing new-age sector: Casual gaming, Web3, NFT and blockchain-based gaming, esports, sports streaming, sports content and commerce, sporting experiences platforms. And there’s the biggest and perhaps most controversial piece of the pie: Fantasy sports, in which contestants select a roster of players and win or lose points or money based on the real-life performance of those players and teams.

Cricket, of course, accounts for the largest cohort of the Indians immersed in fantasy sports. But there’s also kabaddi, hockey, football, volleyball, basically games in which leagues exist in the real world. And, yes, they may not hold a candle to fantasy cricket, but there are thousands of baseball buffs who keep the fantasy baseball leagues going in this neck of the woods.

There are few digital businesses that are as well placed as the top fantasy gaming ventures. They’re well-funded and have garnered millions of (paying) users. As per data put together by the Federation of Indian Fantasy Sports (FIFS) and Deloitte, the market was estimated to be worth ₹34,000 crore with all of 200 players in the fray.

It’s not all hunky dory, though. The ambiguity around whether a fantasy game is one of chance (which is illegal) or of skill is a debate that threatens the longevity of the golden goose. As Sunieta Ojha, advocate-on-record in the Supreme Court: “Fantasy sports is IT-enabled gambling… fantasy games are trying to cash in on the popularity of sporting events by engaging gamers in a world of curated reality and by providing easy access for wagering or betting on their selected teams.”

The Forbes India cover story is on Dream Sports, which is trying to build a sports conglomerate with fantasy sports at its core. It is rich in funding (last valued at $8 billion), had a little over ₹2,700 crore in topline in FY21, ₹329 crore in net profit and claims a user base of 150 million, giving it a market share upwards of 80 percent. As Dream Sports co-founder Harsh Jain tells Naini Thaker, who has written the cover story: “Five years down the line, it is very likely that fantasy will be our core, but we would like to believe that it will be a much more diversified core.” Is the diversification prompted by the uncertainty regarding fantasy gaming? “Yes it helps de-risk, but no that’s not why we are doing it. We are just solving the problem for sports fans in India.”

But then sports tech isn’t just about fantasy gaming. As Rajiv Singh points out in an array of stories, it is also about casual gaming, games streaming, esports and much more. Consider the Mobile Premier League, where fantasy cricket isn’t the mainstay; carrom, ludo and bridge are MPL’s top performers. For more on that, don’t miss ‘League Of Its Own’.
Best,
Brian Carvalho
Editor, Forbes India
Email: Brian.Carvalho@nw18.com
Twitter ID: @Brianc_Ed