Rajesh Gopinathan is busy building an agile, optimised-for-business-value enterprise that can associate value with the complexity of a problem, not the elegance of the solution 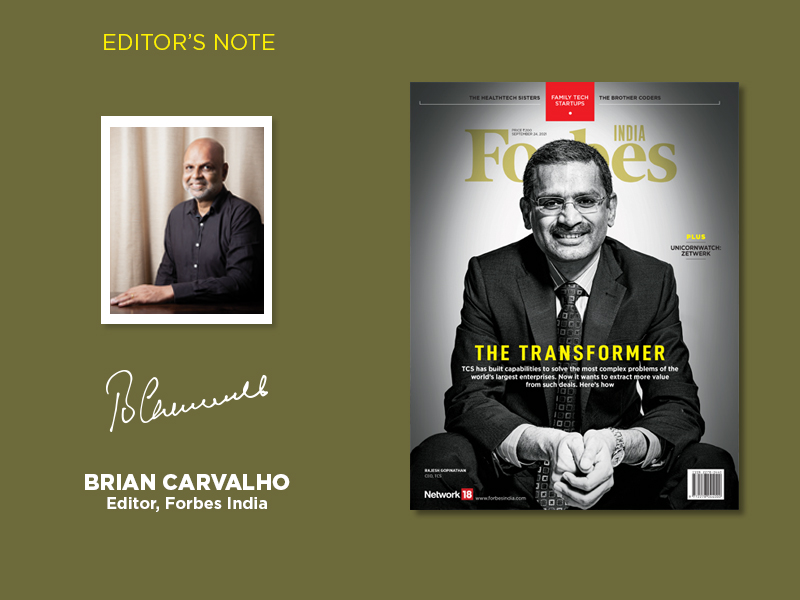 A cursory glance at an assorted basket of brands, stocks and startups would suggest that more than a few have nudged ahead of their reality. This fortnight’s cover story is on an Indian bellwether whose brand is the world’s third largest in value in its sector, after IBM and Accenture—and the fastest growing among those three. In market capitalisation, it is No 2. Yet, Rajesh Gopinathan, CEO of Tata Consultancy Services (TCS) since February 2017, believes the problem of the Tata flagship is quite the reverse of what’s out there on The Street: The reality has been far ahead of where the brand is; although, as Gopinathan tells Harichandan Arakali who penned this fortnight’s cover story, the brand is now “doing a better job catching up with where the reality is”.

Gopinathan may have called it a ‘problem’, but if providing business value that doesn’t get perfectly articulated—and hence the gap with reality (and the perception gap with Accenture and IBM)—is a problem, many head honchos would give an arm and leg to be saddled with such a headache. After all, it isn’t as if TCS is not doing the right thing and hence requires a radical strategic or philosophical shift; rather, the need of the hour is more of a tactical evolution of capturing greater value for the work TCS already delivers. And the starting point of that journey is internal appreciation, then that of customers, and then of the larger market.

Internal appreciation is not something one can take for granted—not when you’re heading a company with a talent base of roughly 500,000 engineers. Few HR firms would have manuals for that.

To return to the ‘problem’, the engineering mindset is more prone to convey to customers the elegance with which they’ve solved a problem rather than its complexity. That, in turn, does few favours to the value provided, as the costing of the project is based on the effort that went into it—which for the engineer was relatively an easy problem to solve. The shift Gopinathan wants to bring about at TCS is to associate value with the complexity of a problem, not the elegance of the solution. To do this, TCS has kicked of a ‘Triple A program’ of Awareness, Articulation and Amplification. For more on how that works, and TCS’s approach to building an agile, optimised-for-business-value enterprise, Arakali’s ‘A Brand New Story’ is a must read.

The T in TCS stands for Tata, one of India’s foremost business families founded in the 1860s by Jamshedji Tata, and the jewel in the conglomerate’s crown for some time now. In our annual special package on family businesses, we turn the spotlight away from India’s storied families to the new ones on the block—yes, the bustling tech startup arena with family as founders. We have husband-wife combos, brothers, sisters… and an uncle-nephew duo who plumped for what’s considered the most tech-deficient sector globally: Construction. The uncle’s civil engineering’s expertise and the next-gen’s tech knowhow made a perfect pairing for an ecommerce platform for the construction sector aptly christened Brick&Bolt.

Don’t also miss the stories of family trio spearheading a fintech venture that’s already valued at some $200 million; and the sisters who, after higher studies at top-notch international universities and stints at marquee global banks and corporations, got together to create a health-tech startup. Unlike the families of yore, today’s household entrepreneurs are fuelling their ambitions with the rocket fuel of venture capital. They’ve miles to go, but a fresh wave of first-generation tech-driven family businesses may have just begun.

Tweets by @forbesindia
Photo of the day: Battered
Study shows mRNAs may kill cancer too; Apple-Epic lawsuit ruling; and a chat with Qlik India's Varun Babbar