The billionaires list got longer, and they got richer in 2020

Thanks in the main to skyrocketing stock prices, the number of billionaires on the Forbes annual list of the world's wealthiest hit 2,755—660 more than in the 2020 list. India reinforced the trend with 140 new billionaires 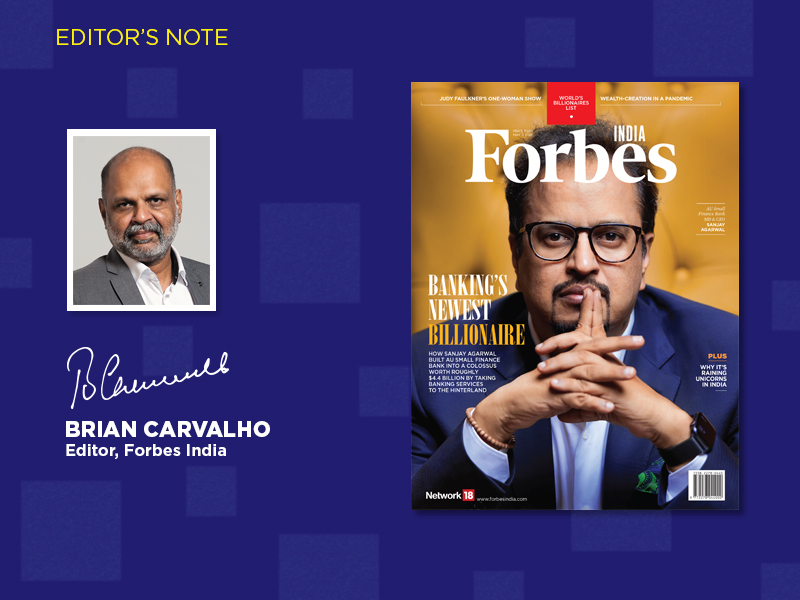 Writing about billionaires at a time when India’s daily Covid-19 caseload has breached the 200,000 mark—in mid-April—may seem surreal, even perverse. It’s that time of the year, all over again, when those rendered jobless virtually overnight, thanks to cities shutting down, begin the long journey to their homes in the hinterland. It’s also that time when the scramble for beds, ventilators, oxygen and medication is getting graver by the day.

But that’s the reality of the Covid-19 era. The world’s billionaires’ list just got longer. And they’ve got richer, too. Thanks in the main to skyrocketing stock prices, the number of billionaires on the Forbes annual list of the world’s wealthiest hit 2,755—660 more than in the 2020 list. The collective net worth of this elite bunch was up to $13.1 trillion, higher by $5.1 trillion from a year ago. India reinforced the trend, with the rise of 140 billionaires, up from 102 last year, making it the country with the third-highest number of super-Richie Riches; their collective wealth almost doubled to just under $600 billion.

In theory, this is capitalism working just fine. Remember, after all, that even if it is the individual’s wealth that tends to be tom-tommed, it’s a less significant manifestation of the organisation he or she has built with the help of hundreds of thousands in the workforce. The founders are in most cases entrepreneurs who took a risk to build a venture that today can employ so many. These founders—of traditional and new age companies—are pulling out all stops to create assets, jobs and industries, which in turn does its bit for the economy; and that economic growth will trickle down to the lower layers of the pyramid.

Or at least that’s how it’s supposed to work. But, in Covid-19 times, the paradox being pointed to by sections of economists and analysts is that billionaire fortunes may be back to pre-pandemic highs—and even higher—in less than a year, but it’s going to take the world’s poorest much longer to turn around their lives. In the US, working families are looking to President Joe Biden to usher in a system that ensures the rich and corporations pay higher taxes, which will go into improving public services and building an economy that works for all Americans.

In India, the government’s call—if you go by the finance ministry’s Economic Survey for 2020-21—is that in developing countries like India, economic growth and inequality will converge at some point; and that economic growth will have a far greater impact on poverty alleviation than inequality. (Inequality refers to the degree of dispersion in the distribution of assets, income or consumption; poverty refers to the assets, income or consumption of those at the bottom of such distribution.) “In sum, for a developing country such as India, where the growth potential is high and the scope for poverty reduction is also significant, a policy that lifts the poor out of poverty by expanding the overall pie is preferable,” notes the Survey. Redistribution for greater social equality is only feasible if the size of the economic pie grows rapidly, reckon the economists of North Block.

Against such a backdrop, it’s entrepreneurship, innovation and leadership—rather than billionaire wealth in isolation—that will help in increasing the overall economic pie. The Forbes India cover story this fortnight is on one such founder-turned-billionaire who has built a sustainable operation on the platform of financial inclusion that takes banking services to the hinterlands of India. Don’t miss Samar Srivastava’s profile of Sanjay Agarwal and AU Small Finance Bank.

Tweets by @forbesindia
Moving to a big city humbles you: Mayank Kumar on Forbes India Beyond the Boardroom
Oscars 2021: Here are all the winners