Titans of the North

While western and southern India have been at the centre of discussion relating to India’s business ecosystem, northern India, some may say, needs to claim its rightful place in the country’s economic landscape. While there are pockets where economic activity has been well below potential, some states and regions are now gearing up to take advantage of the enormous opportunities they have at their disposal, making a serious bid to attract investments. Venture Intelligence’s ‘Indian Private Equity Trend Report 2016’, on private equity and venture capital investments, shows companies based in Western India accounted for almost 40 percent of PE investments in value terms in 2015, while South India companies came next with a 32 percent share and those from North India finished third with 22 percent. 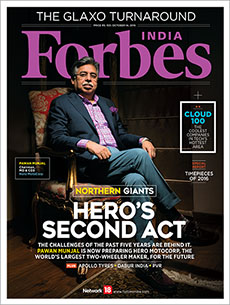 But rankings aside, NCR and the rest of northern India do boast of some of the biggest names in corporate India—companies with pedigree, heft and serious clout. This issue of Forbes India presents a selection of a few of the biggest names from the north, and takes a look at how they are preparing for the next stage of growth. Take the Pawan Munjal-led Hero MotoCorp. The world’s largest two-wheeler maker has demonstrated the resolve to retain hard-earned market leadership despite its break-up with its joint venture partner of 26 years, Honda Motor Company. After an initially challenging five years following the split, where Hero saw an erosion in market share, today’s Hero MotoCorp is future-ready, with plans to launch a slew of models to dominate the market. Apollo Tyres of the Kanwars is another example of how an Indian thoroughbred has faced setbacks in its attempts to go global but has stuck to its game plan and is now giving shape to a strategy to tap new markets, having learnt from experience. Ajay Bijli’s multiplex company PVR, on the other hand, is drawing up new initiatives to remain ahead of the curve as the world of entertainment presents several options for the consumer and, consequently, new challenges for the movie exhibition business. FMCG major Dabur, another company in this selection, is confident of a pick-up in consumption demand, and isn’t too worried about Patanjali Ayurved emerging as a disruptor.

Elsewhere in this issue, we also bring you a fascinating story of how Andrew Witty, the CEO of GlaxoSmithKline, has been putting in place a turnaround plan for the drugmaker brick by brick which may well make the task of his successor much easier. There’s also the exclusive Forbes ranking of the hottest private companies in the cloud where Sridhar Vembu’s Zoho, which we featured on the cover in our June 10 issue, figures at number 66.

Tweets by @forbes_india
Podcast: Hero's second act
The math behind the RCom-Aircel merger