Why India needs to test even more people

Despite the increase in daily number of Covid-19 tests, higher positivity rates in certain cities point to the need for a more inclusive approach 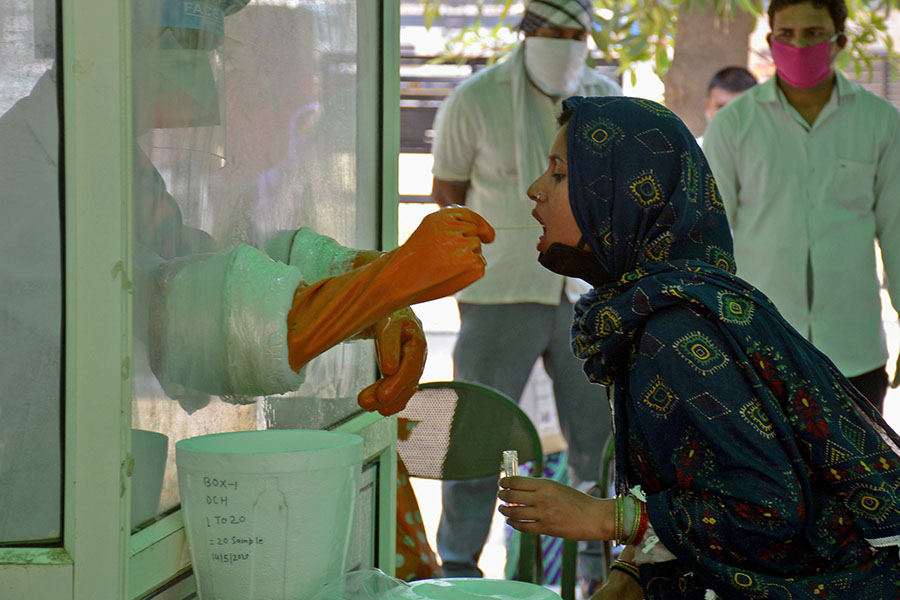 A medical professional collects a swab sample from a woman to test for Covid-19 infection at the Joint District Hospital of Sanjay Nagar in Ghaziabad
Image: Sakib Ali / Hindustan Times via Getty Images

In late March, India tested under 10,000 Covid-19 samples a day. People with influenza-like symptoms, and without a history of foreign travel, couldn’t get tested as the country struggled with making test kits available. By the end of April, the numbers had moved up to 30,000 tests a day. In June, an average of 150,000 samples were being tested a day, according to the Indian Council for Medical Research.

While testing capacity is no longer a constraint, even now it turns out that getting tested is a challenge. As the number of tests has gone up, there have been wide variations in positivity rates (the number of tests confirmed to have the Covid-19 virus as a percentage of total tests conducted). This number is important, as it shows that infections in certain cities have become clustered. The national positivity rate stands at 5.7 percent, with some states like Himachal Pradesh (0.5 percent) and Jharkhand (1.06 percent) recording lower rates. 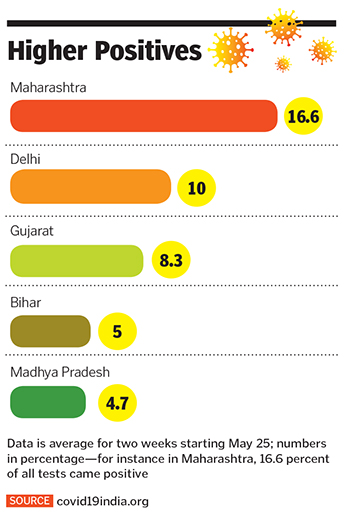 Delhi and Mumbai have been particularly hard hit, with positivity rates of 27 and 32 (between June 7 and 11) percent respectively. Both cities have capped the number of tests being conducted at 4,500 to 5,000 a day, and have declined to test asymptomatic cases. (Note: These numbers do vary. On some days, Delhi has tested only 3,700 samples.) As a result, there has been a decline in positive cases in these cities, even as the positivity rate has risen. This points to a false sense of calm as it is clear that a number of people are slipping through the net. Though potentially asymptomatic, they could infect others. The lack of testing in cities where cases are clustered has surprised infectious disease experts, as testing capacity is no longer an issue. “When we have such high positivity rates, it has to be taken as an indirect indicator of a wide prevalence in the community and hence the possibility of community transmission has to be taken seriously,” says Dr Anup Warrier, senior consultant, Aster Medicity, Kochi. According to him, there is little point in denying community transmissions, as testing rates in high positivity areas are not being ramped up. On June 11, a change in testing protocol in Delhi, where all asymptomatic cases were tested, pushed the number of positive cases to 1,877—the single highest daily count. While data on the number of tests carried out is awaited, it is clear that in areas with high positivity rates, more tests will result in more cases being recorded. As more states loosen testing protocols, expect infections and positivity rates to rise.

Tweets by @forbesindia
India-China feuds over the past fifty years
EXPLAINED: What's happening at the India-China border?