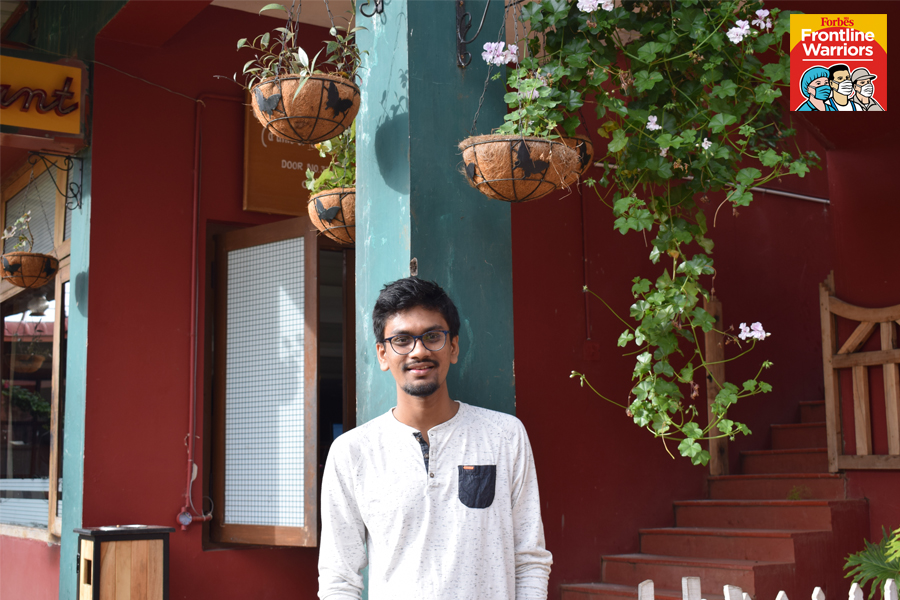 It was a lazy weekend in mid-April, when software engineer Umang Galaiya was scrolling through his Twitter feed. It was when he came across a tweet that asked if someone could write a software program that would pull all tweets pertaining to verified Covid-19 resources and put them together on a website. “It was a time when out of 10 tweets on anyone’s timeline, seven were asking for or providing Covid-19 resources,” says Galaiya. He replied to the tweet, saying it didn’t need the creation of a new website and the resources could be looped back to Twitter itself, like an advanced search, avoiding the extra step of going to a new website and then back to Twitter.
In about 10 minutes he had the first prototype of the page covid19-twitter.in going, with simply the input words ‘verified’ and the name of the city. Since the 25-year-old hadn’t had the need to hunt for Covid-19 resources himself, he asked people for details that needed to be added to the page. Replies and messages poured in, and he added and updated the engine to look for everything from hospital beds and ICUs, to medications and tiffin services. The page throws up the latest tweets about all such resources.

“Twitter advanced search gives you pretty good results, but it’s not very user-friendly and I wouldn’t expect a layperson who is looking for resources to learn how to use it,” says Bengaluru-based Galaiya, who works remotely for a startup in the US. Using the word ‘bed’ or ‘beds’, ‘ventilator’ or ‘ventilators’ would throw up different results, and Galaiya’s search accounts for everything. For instance, he says, “For food, you have a bunch of things, like food, dinner, lunch, tiffin, etc.” All of these come under ‘food’ on the page, rather than a person having to put in several search words if they were doing an advanced search themselves.
“It’s a very simple tool that solved a very big problem,” says Arjav Parikh, an interaction designer based in Ahmedabad, who used the tool to find the right tweet that helped him arrange for oxygen cylinders. “It helps people frame the right questions in terms of queries and finds you the right details using Twitter search. Since someone I knew needed oxygen, I used the tool and found a bunch of tweets. I called a couple of those contacts and the very second person had it in stock, so we purchased it.”
People have used the Twitter page, thanked Galaiya, retweeted the link and even made instructional videos on Instagram on how to use the search page. “I couldn’t update or redesign the page drastically because the videos showed the original page,” says Galaiya, adding that the page got 15 lakh views in the 10 days after he put it up on April 18, going up to 188,000 views on one of the weekends.
States and cities have come up with websites to provide up-to-date information on the availability of hospital beds etc, but Galaiya’s effort remains a useful search tool that includes several other elements and covers different cities. “When I launched this I don’t think there were any government resources being updated in real-time, but I think a week or so after I built this page, the Delhi government launched something that had a real-time list of beds and now a lot of other major cities also do,” he says.
Parikh points out that building and maintaining a website costs time and effort. And if it is volunteer-driven, people might stop updating it, but the data on Twitter remains.
“Something like Twitter is more effective because you can simply use it without worrying about maintaining the software,” he says. “Also, the larger problem would be faced by people who test positive after everyone does, when the energy of all these volunteers has died out. Maybe there's no volunteer maintaining the city-based real-time tools, but the data on Twitter still remains.”
Although the daily number of views of Galaiya’s page has declined since April, even in the first week of May the results threw up about 40,000 views. He is surprised, and a bit disappointed. “I was hoping it would be 10,000 at most. I am hoping people don’t need to use this anymore,” he says.

Tweets by @forbes_india
What is mucormycosis, or Black Fungus?
Sadness, anger and schadenfreude with India's Covid-19 Crisis