Startups to make your kids app makers before they turn 10

Startups such as Code Vidya, WhiteHat Jr and Hackberry are teaching kids to programme and use technology to solve problems 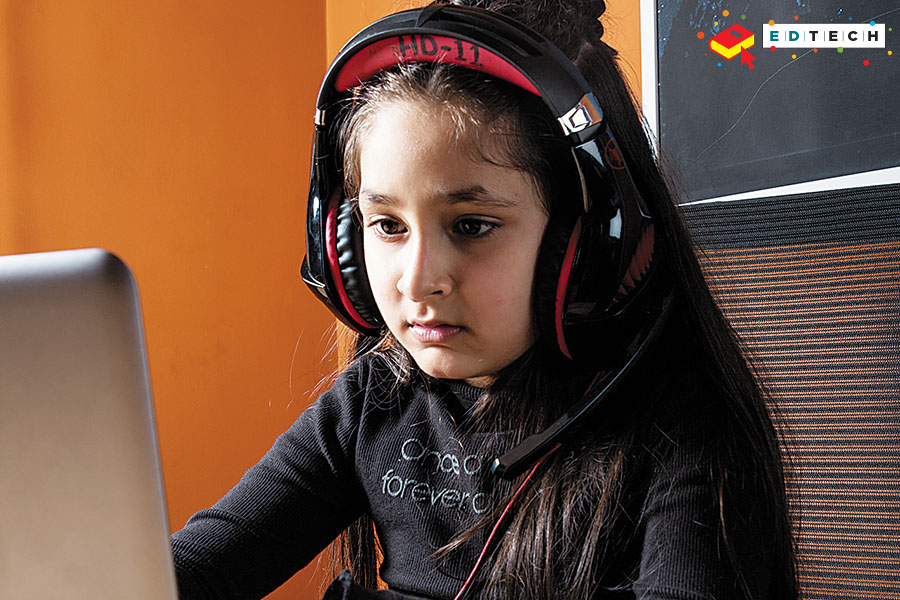 
On her way back from school, one winter afternoon in 2019, seven-year-old Hirranya Rajani, a resident of Santa Cruz in Mumbai, saw two hearing-challenged people gesture at each other. When her mother told the second grader that it was called ‘sign language’ and is used to communicate with each other, Rajani asked, “What if I want to communicate with a friend who is deaf?” Over time, she solved the problem herself by developing an application called ‘Signaide’ that converts words into sign language.

The coding bug bit Hirranya when she was introduced to ScratchJr—a programming language for beginners that enables children aged between 5 and 7 to create their own interactive stories and games—in school. “She came home one day with a book from her library that teaches kids to develop games using ScratchJr. During one of the vacations, we sat with that book,” recalls her mother Kavita. Adds Hirranya, “I always wanted to develop that game called Droom on the Broom.”

An engineer, Kavita caught on to Hirranya’s interest in learning programming pretty early. And as soon as she read about the launch of WhiteHat Jr in one of the school groups, she enrolled Hirranya for the demo class, where she met Gauri Parulkar, currently the curriculum director. Kavita’s brother is wheelchair-bound due to a spinal cord injury, so Hirranya has always been empathetic towards differently-abled people. It propelled her to take up designing the screens and the research which, she says, “were a challenge for me since it’s hard to find all the signs”. Hirranya is now planning to add elements to her application so that it can be used by both the hearing- and visually-challenged under the guidance of WhiteHat Jr’s teachers. 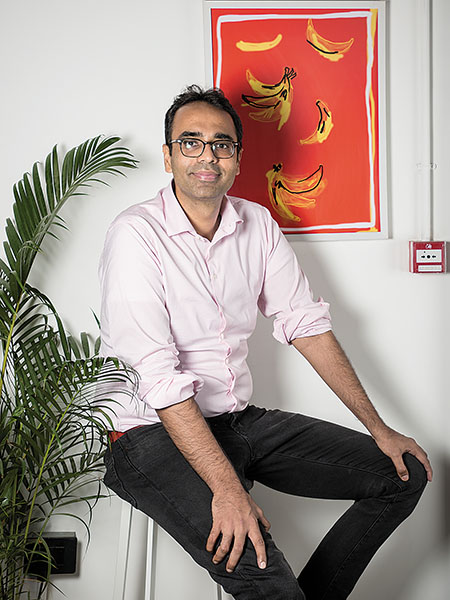 
Founder Karan Bajaj thought of WhiteHat Jr while he was researching about early childhood coding. For him, the thing that stood out was that children who started coding early began to think of themselves as builders or creators. “They experience the joy of coming up with an idea and bringing it to life versus consuming things passively. The core idea of our company is that kids will become builders for life,” says Bajaj.

WhiteHat Jr is an online platform that allows children to learn programming from teachers, and its modules include lessons on algorithmic thinking, fundamentals of logic, sequence structure and the basics of UI/UX. Eventually, children are encouraged to create an application, which under the guidance of the tutors—also connected via the cloud, so they can work out of remote locations with an internet connection—is further developed. “Today, technology is at the centre of every household, yet it is taught in less than 1 percent of the school curriculums. Even if schools want to, they will not have a curriculum because tech is changing so fast... by the time they start teaching, the curriculum is already obsolete,” says Bajaj.

Ever since its launch in December 2018, WhiteHat Jr has seen over 500,000 students take a trial session. “We have been booked out every day. Now there are thousands of classes, and we are booked out within an hour. There is a lot of consumer demand,” adds Bajaj, who says what makes the company stand out is its original coding curriculum, which offers a range of artificial intelligence course options, and its ability to train teachers at scale. 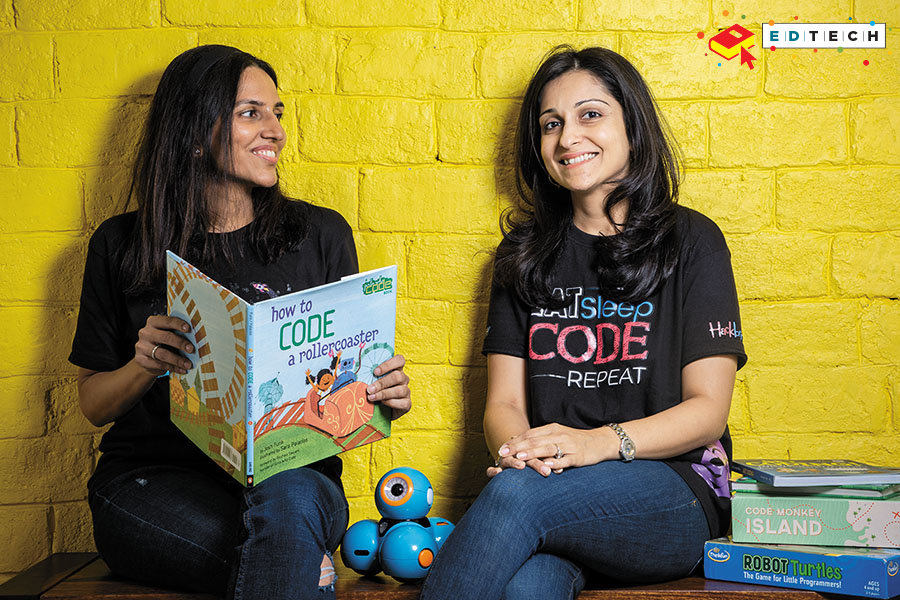 The Mumbai-based startup, which has an annualised revenue rate of $15 million, has started two flagship programmes: A Silicon Valley project and 15-under-15 programme. The former is one where its top 1 percent students get a chance to visit Silicon Valley, meet engineers at Google and show their ideas to venture capitalists. “For 15-under-15, 15 children will get $15,000 to start their companies with our back-end support,” says Bajaj.

While WhiteHat Jr wishes to continue following the online model, as Bajaj feels it is more scalable, there are other companies like Hackberry and Code Vidhya that are focusing on the offline model and using it as a stepping stone to move to online. For Anisha Parikh and Ashni Dwarkadas, the thought of setting up Hackberry came while they were researching for coding programmes to enrol their children. “We felt it was a great time for them [children] to learn coding because their minds are naturally aligned to that sort of learning and thinking,” says Parikh. After a couple of successful pilots, the duo decided to roll out Hackberry about two-and-a-half years ago, with a focus on developing a curriculum that was entirely concept-based.

At the beginner level, Hackberry only uses games, worksheets and group activities to teach basic concepts. “We avoid screen time for the young kids,” says Parikh. Their aim is to have the child think like a programmer. Hackberry not only runs classes in schools as part of its curriculum, but also private classes at various centres, with charges ranging from ₹8,800 for three months for private classes to ₹4,500-5,000 per year per student in schools. The Mumbai-based startup has tied up with 10 schools, and in the coming year plans to expand to more schools and cities such as Bengaluru and Hyderabad.

However, the challenge is getting the right set of tutors. “There are a lot of people who have a really strong coding or engineering background, but aren’t able to effectively communicate complex concepts. And there are some, who are great teachers but lack the right knowledge,” says Parikh, adding that they have also developed a comprehensive teacher training programme to get around this. Hackberry clocked in a turnover of ₹40 lakh last year, and is hoping to double it in the coming year. 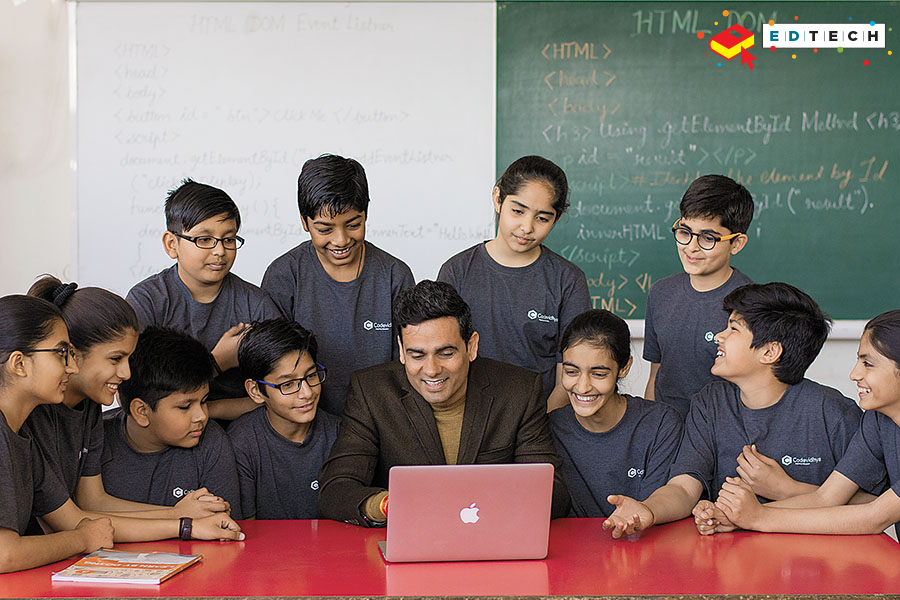 Code Vidhya, set up by Shivram Choudhary, works with 25-30 schools

While Hackberry focuses on Tier-1 cities, Code Vidhya, set up by Shivram Choudhary to introduce to the education system options for vocational training, is trying to make coding programmes affordable and take them beyond predominantly urban centres. “There is a huge gap between what the industry needs and what the educational institutes are providing in terms of skills.” he says.

In 2015, Choudhary along with a group of IITians devised a curriculum to teach coding to children from class 1-10. In 2016, after a pilot project in Shekhawati, Rajasthan, the team worked on pilot projects for eight other schools, refined the curriculum further and launched the company in 2018. Says Choudhary, “Going forward, about 60 percent of the jobs will have computer at the core of its working, yet only 15 percent students in India are taught those. Code Vidhya is filling in the gaps, by reinventing the age-old syllabus of computer science and teaching children skills that would be relevant for them.”

The Jaipur-based startup is now working with about 25-30 schools, out of which 11 are in Coimbatore and the rest in Karnataka and Rajasthan. Code Vidhya charges ₹1,000 per student per annum, including the reading material, workshops and access to online course as well. The company clocked in a turnover of ₹1 crore this year, and it is expecting to touch ₹10 crore in the coming year, thanks to the 20 other schools that it is in talks with to tie up.

“Technology has become all-pervasive in our lives, and it is important for kids to become technology aware from an early age. WhiteHat Jr enables kids to get access to best-in-class logic/coding content and teachers in their homes,” says Anup Gupta, managing director, Nexus Venture Partners.

Most of Choudhary’s students have launched apps, but they haven’t found a way to monetise them. But they are developing clear ideas about problem-solving and revenues should follow, he feels. “Students now tell me, why should we be the job seekers, when we can be the job creators?” says Choudhary. One of his students, for instance, has developed an Uber-like application for ambulances. He adds, “I’m seeing that students who are learning coding have started thinking about problems that can be solved with the help of technology.” And that’s not a bad start.