The choice of government is a matter for the people of Sri Lanka to decide, but they will do well to remember that—whichever regime assumes power—the country will need to come together as never before to weather the tough times ahead 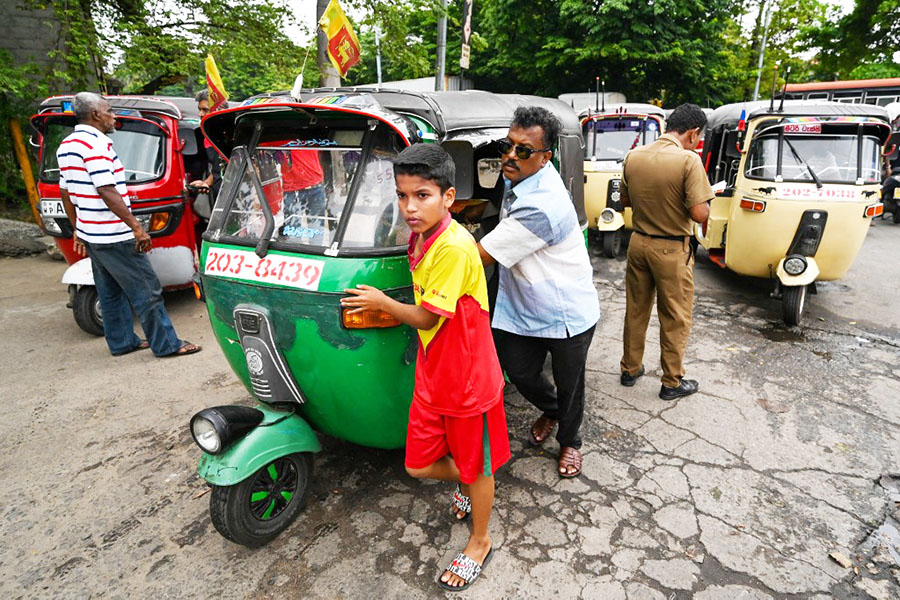 Motorists queue up along a street to buy fuel from Lanka IOC fuel station in Colombo on August 1, 2022. Image: ISHARA S. KODIKARA / AFP

On June 30, 2022, Peter Breuer and Masahiro Nozaki boarded a plane leaving Bandaranaike International Airport. They had been in Colombo for work. As mission chiefs representing the International Monetary Fund (IMF), they had been involved in ten days of extended consultations with the government of Sri Lanka. But the team departed without concluding any loan arrangement, even as the nation faces its deepest economic crisis since independence in 1948.
Although global news coverage of the crisis rose to prominence only in recent weeks, economic pain in the 22 million island-state has been gestating for years. Government debt as a share of output had already been an elevated 70 percent or so through the first half of the 2010s, before accelerating in the second half of the decade, rising to more than 100 percent in 2020.

Observers of the economic fortunes of the country would have pointed to some early signs of potential troubles to come. The government had borrowed heavily to finance the construction of an international airport and seaport in the southeastern part of the country. These turned out to be unprofitable white elephants, and accusations of political corruption swirled around their construction and operation.
While challenging, this debt burden was still potentially manageable while global interest rates remained low and favourable. But as inflationary pressures began to build worldwide, central banks started raising their policy interest rates late last year and this year. This meant higher borrowing costs for everyone, including Sri Lanka. What was a difficult-but-manageable situation quickly morphed into an unsustainable crisis.Also read: Sri Lanka's many missteps that led its economy into a tailspin
The collapse of borrowing meant that Sri Lanka was no longer able to purchase essentials from abroad that would keep the economy going. Electricity and fuel shortages meant rolling blackouts and long queues at petrol stations.  As food became scarce, hunger quickly instigated protests and riots.
Shortages have clearly afflicted every aspect of life in the country. Some schools were forced to indefinitely postpone their exams, because of a shortage of paper. Hospitals began to run out of imported medicine and equipment, and surgeons even had to perform operations using the light from mobile phones. The severe economic crisis had effectively become a massive humanitarian crisis.
Economists have spent a long time trying to understand how such economic crises evolve and resolve. Unfortunately, there is seldom a magic bullet. In the short term, Sri Lanka will almost certainly need external help: forbearance from the international community, albeit not just the IMF but also, crucially, the nation’s single largest creditor, China. Indeed, of Sri Lanka’s $51 billion in outstanding foreign debt, estimates suggest that between 10 and 20 percent is due to the Middle Kingdom (India and Japan are also major lenders, owed between $3 and $4 billion each). Still, the impetus and leadership for restructuring these loans have to come from the Fund, who is the only trusted external party that would be able to offer a credible (if implicit) “good housekeeping” seal of approval.Also read: Sri Lankans return to cooking with firewood as economy burns
Beyond immediate financial assistance, policymakers will need to break the inflationary cycle. July’s inflation print surged to 61 percent, up from 55 percent in June. These numbers are dangerously close to those associated with hyperinflation, which must not be allowed to become entrenched into expectations. The Central Bank of Sri Lanka will therefore need to contain the rate of monetary expansion, while simultaneously extending support to the banking sector, thereby ensuring that credit flows to the private sector do not dry up completely.
Following this restructuring of sovereign liabilities, the government will then need to get its fiscal house in order. Often, this entails painful cuts to public programs. While each country’s bailout program is different, of central importance is the need to offset necessary prudence with appropriate stimulus. This means shedding wasteful expenditures, but keeping essential government consumption and public investment going, to avoid excessive austerity strangling a weakened economy. Thankfully, the IMF seems to have learned some the lessons of the Asian crisis of 1990s sufficiently, and recent programs have generally been more cognizant of the balancing act required.Also read: Lavish projects and meagre lives: The two faces of a ruined Sri Lanka
As the economy gradually recovers, the government will eventually need to investigate how to rebuild the country’s foreign exchange reserves in the medium run. While traditional Sri Lankan products—such as the Ceylon tea enjoyed around the world, along with textiles and garments that are now a mainstay of the nation’s exports—have been reasonably competitive internationally, the economy will need to explore how it can move up the value chain, especially in manufactured goods such as electrical machinery. There is already a nascent electronics industry—located in industrial zones such as Biyagama and Katunayake—but at only 3 percent of the export basket—there is undoubtedly room to grow. The government can also expand the number of export processing zones across the island, work harder to facilitate the integration of Sri Lankan firms into regional production chains, and develop the necessary land infrastructure to allow the easy transportation of completed goods to the ports.
Ultimately, durable economic transformation will only be possible with genuine political reform. The choice of government is a matter for the people of Sri Lanka to decide, but they will do well to remember that—whichever regime assumes power—the country will need to come together as never before to weather the tough times ahead.

* Lim is an Associate Professor of Economics at ESSEC Business School, Singapore, whose research explores, among other things, the economic and political consequences of international financial crises.