After a delay of almost a year, Sri Lanka's Ministry of Crab opens in Mumbai. With a no-freeze policy, it aims to introduce India to its own breed of export-quality crustaceans 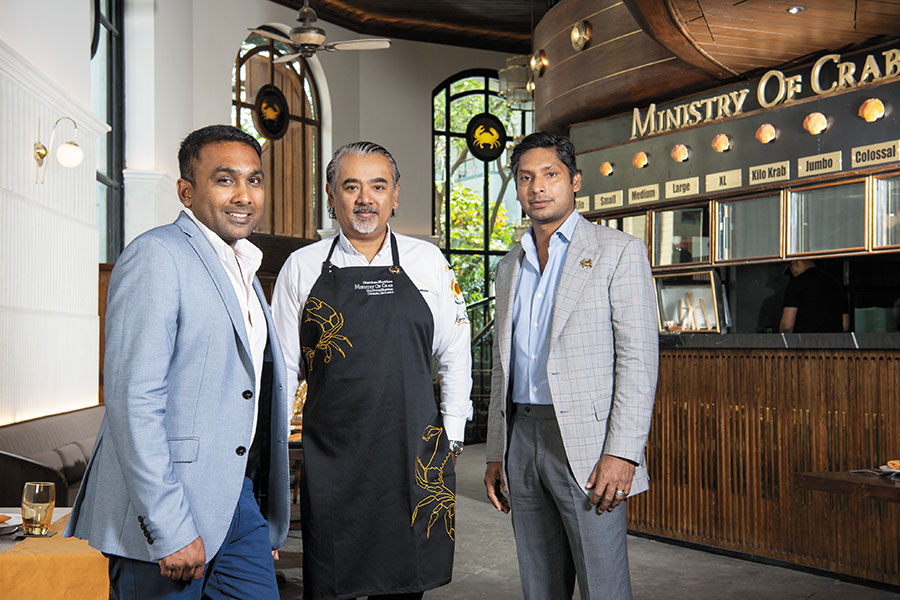 The Ministry takes its identity seriously. Straight up on the menu, you’re greeted first with a firm ‘Declaration’ of what the Sri Lankan restaurant chain, No. 25 on the Asia’s 50 Best Restaurants list, espouses. Next, a detailed ‘Constitution’, from which the Articles mandating a no-freeze policy or an optional use of cutleries come. Disclaimers are everywhere: Availability of crab sizes depends on the weather gods and various other factors. In the original Colombo outpost, which is located inside a heritage 400-year-old former Dutch hospital, another one goes: Your chair may wobble a bit, but we hope you will enjoy such charms.

The philosophy continues with the design too. In all Ministry of Crab (MoC) outlets around the world, including the new 6,000-sq-ft space in Mumbai’s Khar, which opened in early February, a funky counter above the restaurant pass, backlit for both function and effect, showcases the kinds of crab on the menu. If the light is out, that particular variety is unavailable. It possibly hasn’t been caught on the day. For the diner, it’s a game of chance.

“The crabs have to come to us alive,” says Dharshan Munidasa, the restaurant’s half-Sri Lankan, half-Japanese chef and founder. “We are not a farm-crab restaurant. Every crab is caught wild on the day, and our menu changes according to their availability. It’s challenging, because no one has done this before. But we won’t use sub-par or frozen seafood.”

Much of this steadfast dedication to ingredients—as well as the philosophy of running a restaurant largely hinged on one single ingredient—comes from the chef’s unique mix of heritage. As a child, Munidasa shuttled between Sri Lanka and Japan (his father’s Lankan, mother Japanese), and food was an important part of his early memories. “I was a greedy kid,” he says with a smile. “My siblings are much smaller than me, and we joke that it’s because I ate all the food.”

He also savoured the occasional trips to sushi restaurants in Japan. “When I would come back from Sri Lanka, I would look forward to visiting the same sushi joints,” he says. “But Sri Lanka had its own charms. Back then, like in India, we didn’t have supermarkets, but we had trees. We picked the fruit directly off them, which, I recognise now, formulated an enjoyable and interactive relationship with the ingredients. We went fishing. My brother and I would make sashimi on our boats with pen knives when we were 10 years old. So yes, both cultures have shaped my cooking philosophy.” 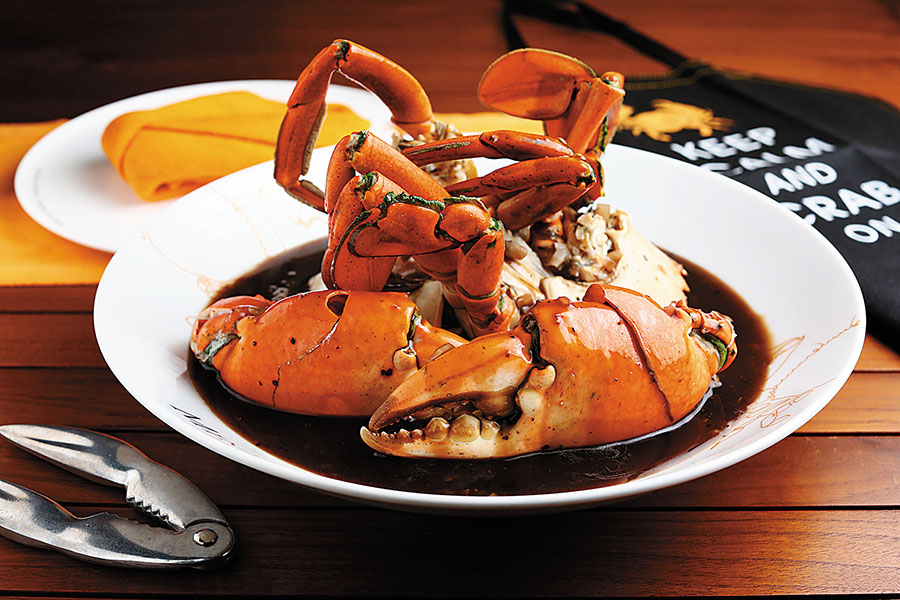 Pepper Crab at MoC
The chef says there is nothing common between the two cuisines, but both exist as separate worlds in his mind, independent of each other. “It’s like being bilingual,” he says. “In the sub-continent, it’s common to be able to think in two languages. So I have two distinct palates that are very different from each other. The Sri Lankan palate can handle a lot of spice, while the Japanese palate appreciates subtleties that are cerebral. There’s no real marriage between the two—it’s like you watch Seinfeld and laugh, and watch a Hindi movie and laugh as well.”

A student of computer engineering, Munidasa calls himself an ‘accidental chef’. He was six months short of earning a degree at Johns Hopkins University in the US when his father passed away, and he returned to Sri Lanka to settle his affairs. “My dad was always talking about doing a Japanese restaurant, so I asked my mom if we should do it now. Initially, she did the cooking, but within a year, I took over the kitchen. I used to cook for myself in college, because I didn’t like the food there.”

So Munidasa’s journey began, without formal training, with Nihonbashi in 1995, a Japanese seafood eatery in Sri Lanka. (At No. 45, Nihonbashi, too, was on the Asia’s 50 Best Restaurants list in 2018.) Munidasa did a TV show episode that featured a Sri Lankan crab, shot in Singapore. Sri Lankan crabs were famous, but the joke was that to eat the good ones, you had to visit Singapore, as most of them would be exported. “Months before MoC opened, I was using that same export-quality crab at Nihonbashi, for very high-end events. That’s when I thought about doing a Sri Lankan crab restaurant, for Sri Lanka.”

“I never went to culinary school, but what I know is how to choose a crab. Even today, you can’t learn that at a school,” he adds. “I learned from crab-mongers at the wholesale markets in Sri Lanka. That knowledge is key to what I do even now.”

Ministry of Crab was founded in 2011 in Colombo. Soon after, cricketers Kumar Sangakkara and Mahela Jayawardene joined Munidasa as investors. “After that, everything fell into place,” says the chef. In the past year, MoC has expanded to Shanghai, Manila and Mumbai. A Bangkok outlet is in the works.

The basics of starting a new restaurant remained the same. “I designed my first restaurant on Excel—I still do that,” he says. “If you match the column width and row height to the same scale, you have a grid that is scalable. I run the numbers. I know where I stand in terms of break-evens. But the experience of opening so many restaurants is something you can only get from living it. It gets easier with time, as you know the problems.” 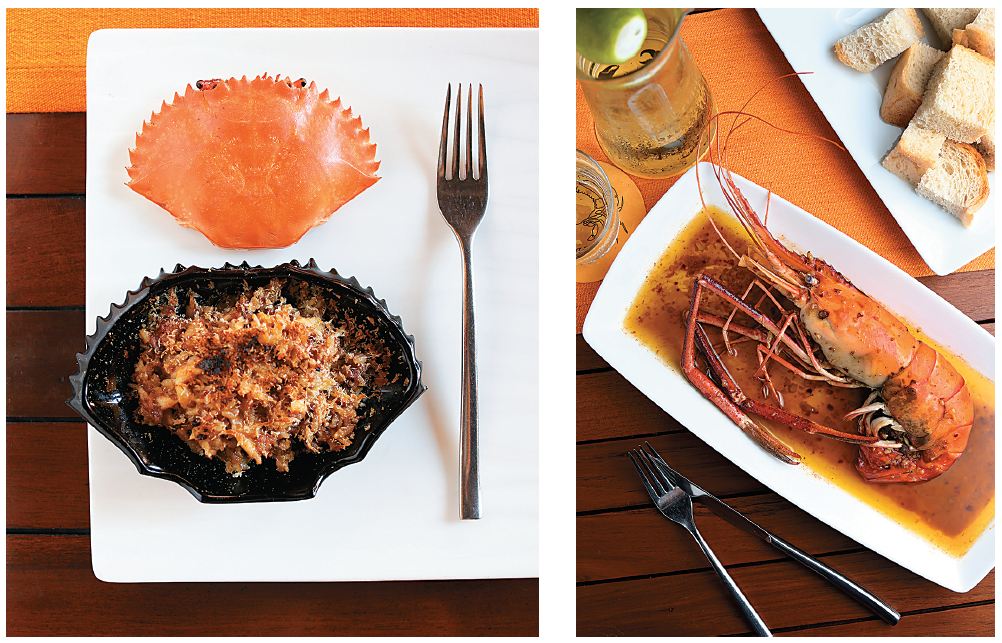 Diners can choose from various curries and marinades, all of which have heavy Sri Lankan roots. Baked crab, seen above.
The retired cricketers are active participants in the business, reading numbers and their audience closely. “Even while we were playing cricket, we would get regular updates on our sales,” says Sangakkara. “Post our cricketing career, we are even more hands-on. We are expanding and growing rapidly now, and need all hands on deck to keep our core philosophy intact and be careful that the brand remains as it was intended.”

Jayawardene adds that the biggest aspect of running a venture is teamwork. “From the kitchen to the backroom staff, you stay strongly united towards a common purpose, and that’s the only way to control pressure and stay consistent, and take collective responsibility for mistakes. That’s the ethos we have had in cricket, and what we have learnt to bring into our businesses too.”

MoC entered India in partnership with Gourmet Investments Pvt Ltd, a company focussed on bringing international F&B concepts and brands into India—they are also behind the Pizza Express franchise in the country. Soon, they will bring Nihonbashi to India, too. Many tourists that seek the hard-to-reserve Colombo MoC outlet are Indian and Chinese. Bringing the brand to India, says the team, was a natural choice.

“Mumbai is one of those mega-cities that isn’t afraid to eat crab,” says Ramit Bharti Mittal, CEO, Gourmet Investments. “It has an extremely awesome cluster effect, which means a large concentration of people who travel frequently, who seek out culinary experiences. And, from a sourcing point of view, it attracts various kinds of importers, too.”

Sri Lankan crabs were famous, but the joke was that to eat the good ones, you had to visit Singapore as most were exported


Sourcing is an ongoing challenge. As in Sri Lanka, the best Indian catch too is exported to countries like Singapore and Dubai. “If you’ve eaten good crab in Southeast Asia, chances are it came from this side of the world,” says Deepinder Batth, COO, Gourmet Investments. “The reason you don’t find it here is because it is priced in high US dollar rates, and Indian restaurants have a hard time outbidding global players for it. Dharshan set the game saying that if you want the best crab in the world, it comes at this price. It took us a while to form relationships with vendors who understand that this is equivalent to export, but to a restaurant within India.”

And come at a price it does. The crabs on the menu begin at ₹1,995 for a half-kilo crustacean and go up to ₹14,395 for a Crabzilla—a 2-kg one, though finding a 2-kg version is rare. Diners can then choose a curry or marinade—pepper crab, chilli crab, curry crab and so on—all of which have heavy Sri Lankan roots.

“The core of Sri Lankan cuisine is our spices—they’re so different from Indian spices. Our curries are much lighter,” says chef Munidasa. 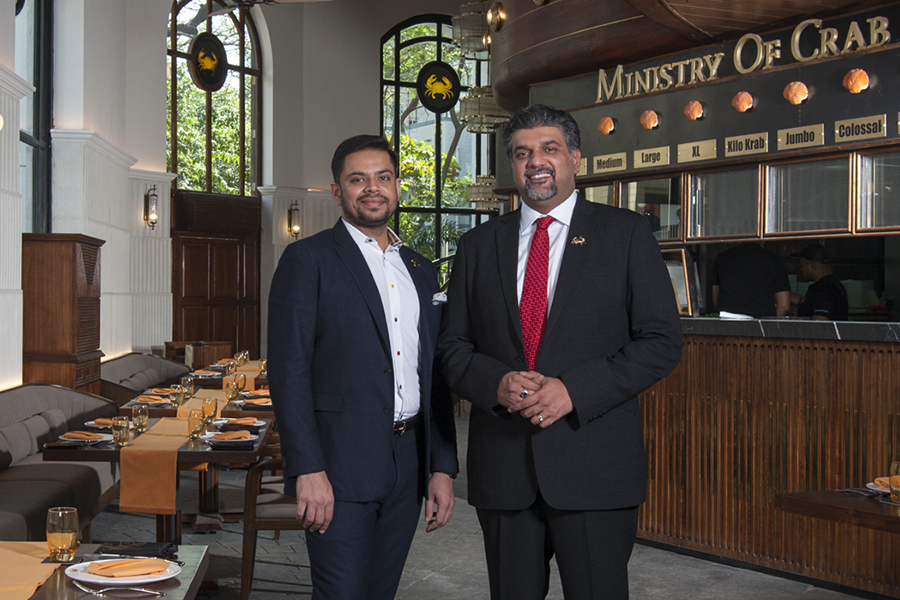 (L-R) Deepinder Batth, Director & COO and Ramit Bharti Mittal, Director & CEO, Gourmet Investments Pvt Ltd
Image: Mexy Xavier
The chef was presented with a challenge unique to Mumbai coming in—to present vegetarian options. “We have a new section on the menu, but let’s be clear: These are vegetable dishes, not vegetarian dishes. The difference is they are not new dishes created for vegetarians, but vegetable preparations that mimic the original crab dishes, using ingredients such as eggplant, water chestnut, button mushroom and morning glory. The curry and preparations remain the same.”

“We bring international brands into India, but we are not in the game of localising them,” says Mittal of Gourmet Investments. “If the brand fits naturally in India, we can tinker with it a bit—like making this vegetarian menu. But it’s still cooked with the flavour palate and ethos from the ministry internationally.”

For the crabs, customers are given branded bibs and a kit of ‘crab tools’, but are encouraged to dig in with their bare hands. “There’s nothing gimmicky about it, that’s the only way to do it,” says the chef. “It’s like eating pistachio nuts—there’s something about taking the shell out yourself.”

The branding and marketing is focussed too—even with celebrity cricketers on board, and a famous chef, the face of the restaurant remains the crab. That’s in line with the ‘Constitution’ the team set out with. The hero is the ingredient.