On the actor's first death anniversary, the filmmaker speaks about the star not getting his due, his professionalism despite the turmoil he went through, and lessons from his untimely loss 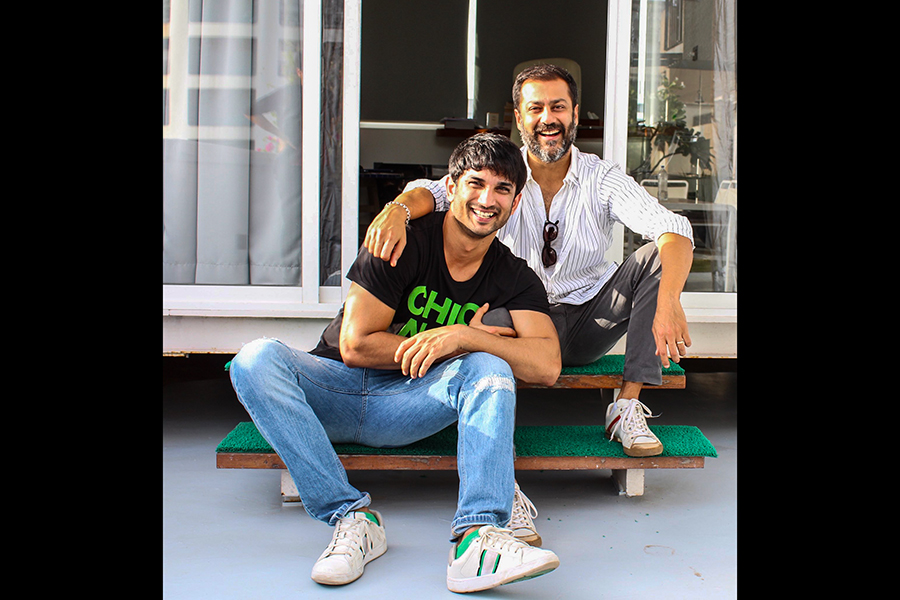 Over time, filmmaker Abhishek Kapoor (top) was impressed with actor Sushant Singh Rajput's professionalism and in him, he found an actor who would go the extra mile to prepare for his part.

Image: Abhishek Kapoor on Twitter It's been a year since Sushant Singh Rajput’s demise, but filmmaker Abhishek Kapoor still finds it hard to reconcile to the fact that he’s no more. “It’s too much of a shock to come to terms with,” he says on the first death anniversary of the actor.

Kapoor shared a special bond with Rajput, having directed the actor’s debut film Kai Po Che! in 2013. Though the actor was a popular name on television with the success of Pavitra Rishta, the filmmaker had not seen his work on the small screen. He cast him only after an audition. “He was overweight. I needed a guy to play a cricketer, someone slim with a particular body type,” he recalls, adding that he went with his gut and the vibe that he felt.
The director put Rajput under intense training, including cricket coaching, and was surprised by what he saw. “I remember going to a ground in Goregaon at 7 am on the first day of practice. He had already reached there and was bowling in the nets,” says Kapoor. “In 45 to 60 days, he was in the shape that I needed. He was totally prepared for the role.”
Rajput was an engineering dropout and an ‘outsider’ in the competitive Hindi film industry. A small-town guy from Bihar, his hunger to succeed and willingness to work hard was evident from the time he gave his first shot. Kapoor was delirious when he nailed his first scene of knocking a bat. “The way he performed and the way he used his voice… he spoke softly, but it had impact,” he says.
Over time, Kapoor was impressed with Rajput’s professionalism. In him, he found an actor who would go the extra mile to prepare for his part. “There was no end or limit to his preparation. He would give his 100 percent," Kapoor says.
As an individual too, Rajput was different from his contemporaries and that helped him add depth to his performances. “He was an avid reader, and he read serious stuff, not spy novels. He wasn’t looking for his next script while reading a book. He read so much about science and spirituality. He was a deep guy,” says Kapoor, whose Rock On!! (2008) won the National Award for Best Feature Film in Hindi.
Kapoor and Rajput collaborated again for Kedarnath in 2018, but a lot had changed in the intervening period. Despite having delivered a hit like MS Dhoni: The Untold Story (2016), the filmmaker claims the actor wasn’t getting his due as an artiste. He says Rajput was under intense pressure and “going through a lot” during the shooting of Kedarnath. “The business was not receiving him well. He had given a monster hit in Dhoni… he was just marvelous in it, but he was not getting the elevation from the business that he deserved. He was getting stagnated. There was a lot of bad press about him in those days. And it was extremely nasty. It hit him really hard,” points out Kapoor, who reveals that the business did not support him either when he was making the movie and that there were people who changed hands on the film.
The duo would discuss these issues intermittently, and the director found it admirable that the turmoil did not come in the late actor’s way of his dedication to his craft. “To have those things in your head, but still to show up and do your best was incredible. There was so much at stake… sometimes you have no choice, but to be strong. Otherwise you will completely collapse… all that negative press will achieve its purpose. He was feeding of that and giving his best. He worked really hard,” says Kapoor, emphasising that Rajput was an introvert, but a strong person. “He was a secure actor. He knew his craft. And that gives you a certain level of freedom… nobody can take that away from you. That made him the person he was.”
In an interview to Forbes India, Rajput had admitted that he does not socialise much. He’d rather pore over books, gaze at the stars and the moon or play the guitar. In an industry where connections make a difference, Kapoor believes this made it harder for him to fit in. “They are not parties, they are business get-togethers. When you call them parties, they become a consolidation of sycophancy,” he says. “Also, he was just too bright… he would be exploding with his genius.”
An emotional Kapoor describes Rajput’s passing away as a huge loss for the business and the future as well. “You just can’t heal yourself out of this… you have to redeem yourself out of this. To have lost such an actor… what does it tell other underprivileged talent—not just actors—in the country? How disheartening is it for them? We have to recover the morale of all those people. It’s a huge loss of an individual and as a collective whole,” he explains.
There are lessons to be learnt from the untimely loss of a promising actor at the age of 34, believes Kapoor. “One has to be so much more inviting and celebrating purity. Let the business people do the business and the creative people do the creative stuff. Respect everyone for what they are. Otherwise it can get really poisonous. There should be a better environment because actors, artistes, creators go through a lot when they create… they are creating something original, most of the times. Inherently, it’s a fragile state to be in… it’s a vulnerable state to expose yourself so much to something new all the time. They need to be handled more delicately. Every artiste is a different person… they are unique and an artiste should be welcomed,” he says.
Kapoor finds it ironic that people are raving about how good an actor Rajput was after he’s gone. “That voice did not come out when he was alive. That is the tragedy,” he says.
However, the director is certain that Rajput's fans will ensure he’s remembered forever. “Sushant’s legacy is in the stars… he’s out there. He was such a science buff. People who love what he has done will keep his legacy alive. He stands for so much more than just his work now," says Kapoor.

Tweets by @forbes_india
Photo of the day: It's a good day
US lawmakers take a big swipe at big tech; Byju's most valuable Indian startup; Astrogate Labs' Nitish Singh on plans ahead